After writing about one of my favorite films, Breaking Away, and one of the "stars" of the film -- a Masi Gran Criterium -- I thought today I would share my own Masi with the readers of The Retrogrouch. 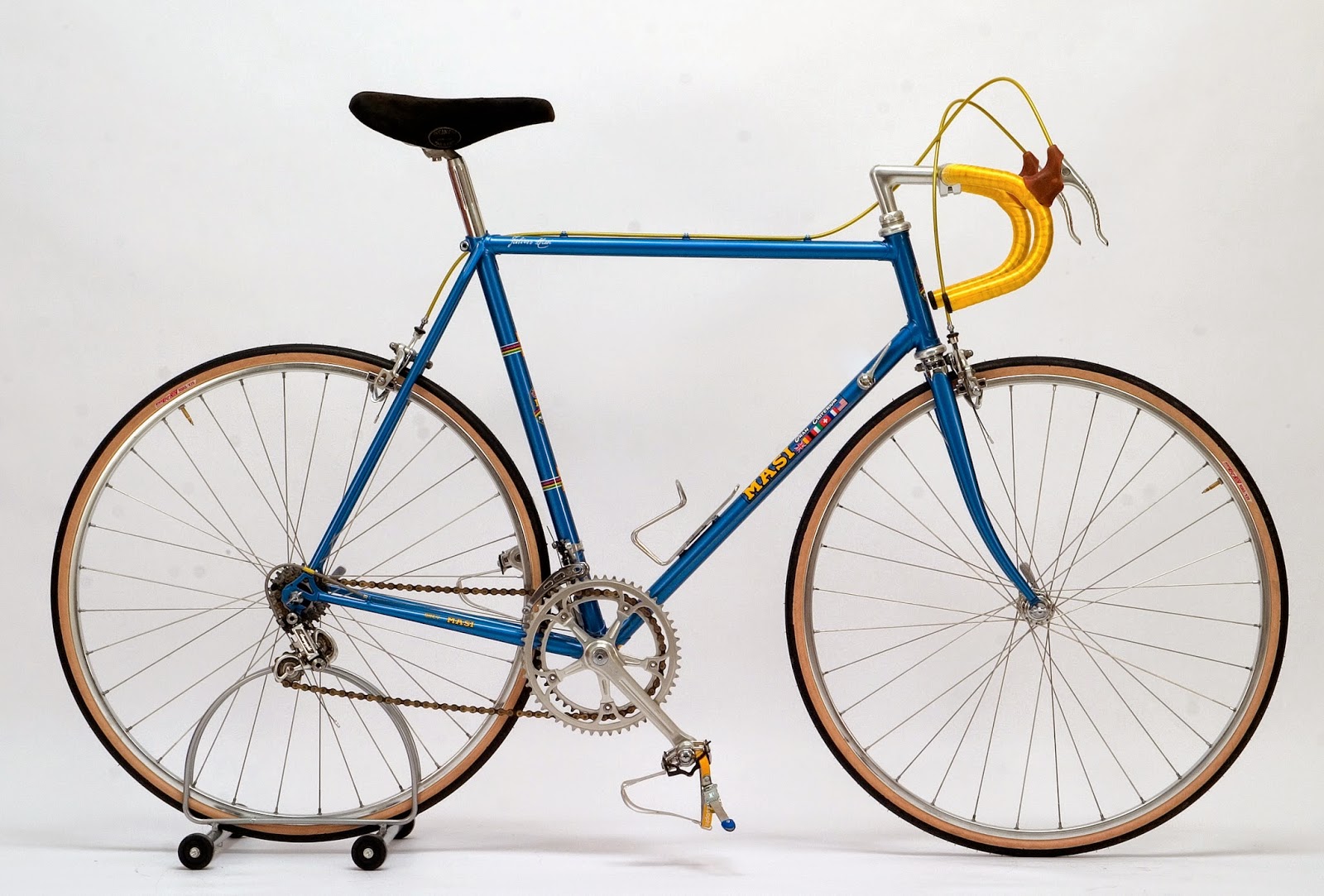 My own Masi is a 1981 Gran Criterium that I found back in 2006. It was generally in pretty nice shape when I found it, and the price was good, though it did need a little help. It came to me built with a mix of parts from Campagnolo and Zeus. While the Zeus parts are decent, they don't quite have the caché of Campagnolo Super Record -- and the best race bikes of the time would certainly have been built with the full Super Record "gruppo." Luckily, I only needed to swap out a few parts, and I already had some of what I needed handy. I sold off the Zeus pieces on eBay and got enough money for them to buy the remainder of what I needed to complete the Campy group. All the Campagnolo parts are dated between 1981 - 1982. 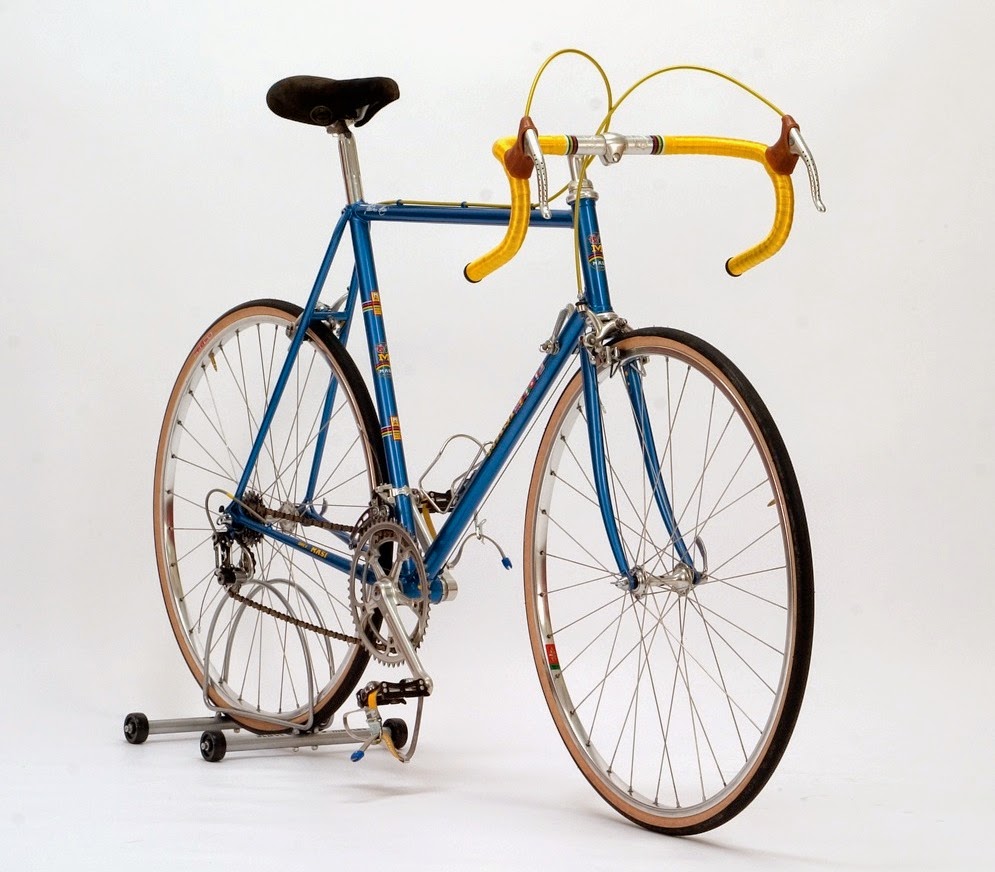 The frame looked nice to start with, but it had some rust in places, and a couple of damaged cable guides that had to be repaired/replaced -- so the frame went to CyclArt in California. Owner Jim Cunningham is very knowledgeable about Masi bikes, being that he had worked at the Masi factory in California before starting his own restoration shop. CycleArt repaired the damages and then matched the old paint and decals exactly. I had a bit of an internal struggle in that an emotional part of myself thought a lot about having the bike painted in that deep red/orange like Dave Stohler's bike in Breaking Away -- but in the end, I decided it was best to stick to the original color. I really love the "Spanish Blue" with yellow combination anyhow. 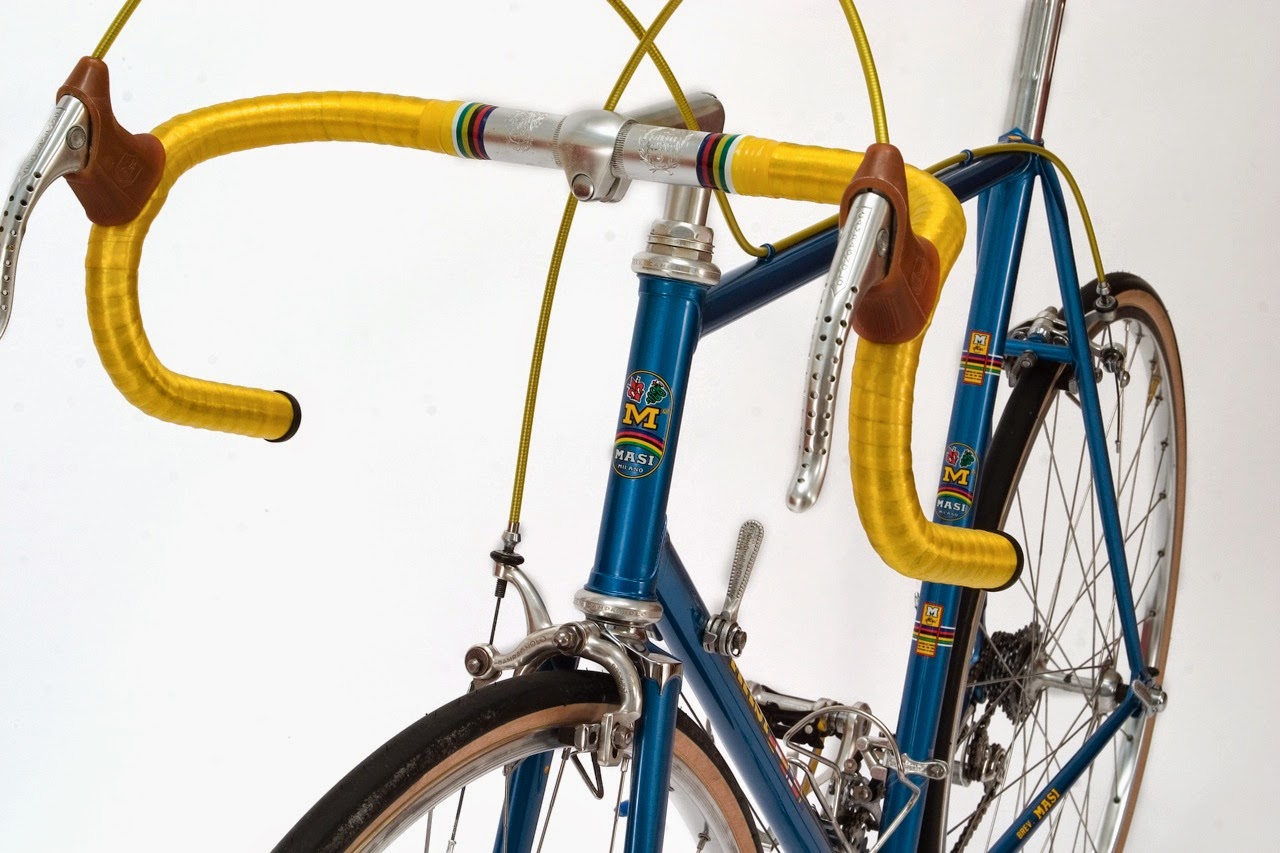 For some of the finishing touches, I used Cinelli saddle, bars, and stem -- all very appropriate choices for a bike like this and of this vintage. Although Cinelli was using its modern "flying C" logo by 1981, I managed to find parts with the older logos, which I think is a nice touch. By 1981, a person might have seen either version, but I always liked the earlier look. The shiny, almost translucent yellow handlebar tape and brake cables were really fashionable choices in the '80s, so I was happy to find them for this bike.

I took this to the Classic Rendezvous Cirque du Cyclisme show and swap meet a few years ago. Photographer Ken Toda was taking nice-looking professional pictures of some of the bikes, so that's where these photos came from. I hope the readers enjoy.
Posted by Brooks at 6:20 PM