After the post about the self-centered dim-bulb who hit a cyclist while texting then declared "I don't care" I thought I'd diverge a bit from bicycles and look into the problem of phones and texting while driving.

I know a lot of people -- even some retrogrouches out there -- love their smart phones. Some people love them too much. Even though more states are passing laws against texting while driving, it doesn't seem to me that many people are paying attention. At any given time while I'm riding among the traffic, I probably see as many as one in five drivers either on the phone, or very obviously looking at the phone they're holding just out of sight. That's an informal count, but I'll bet others could make similar observations. 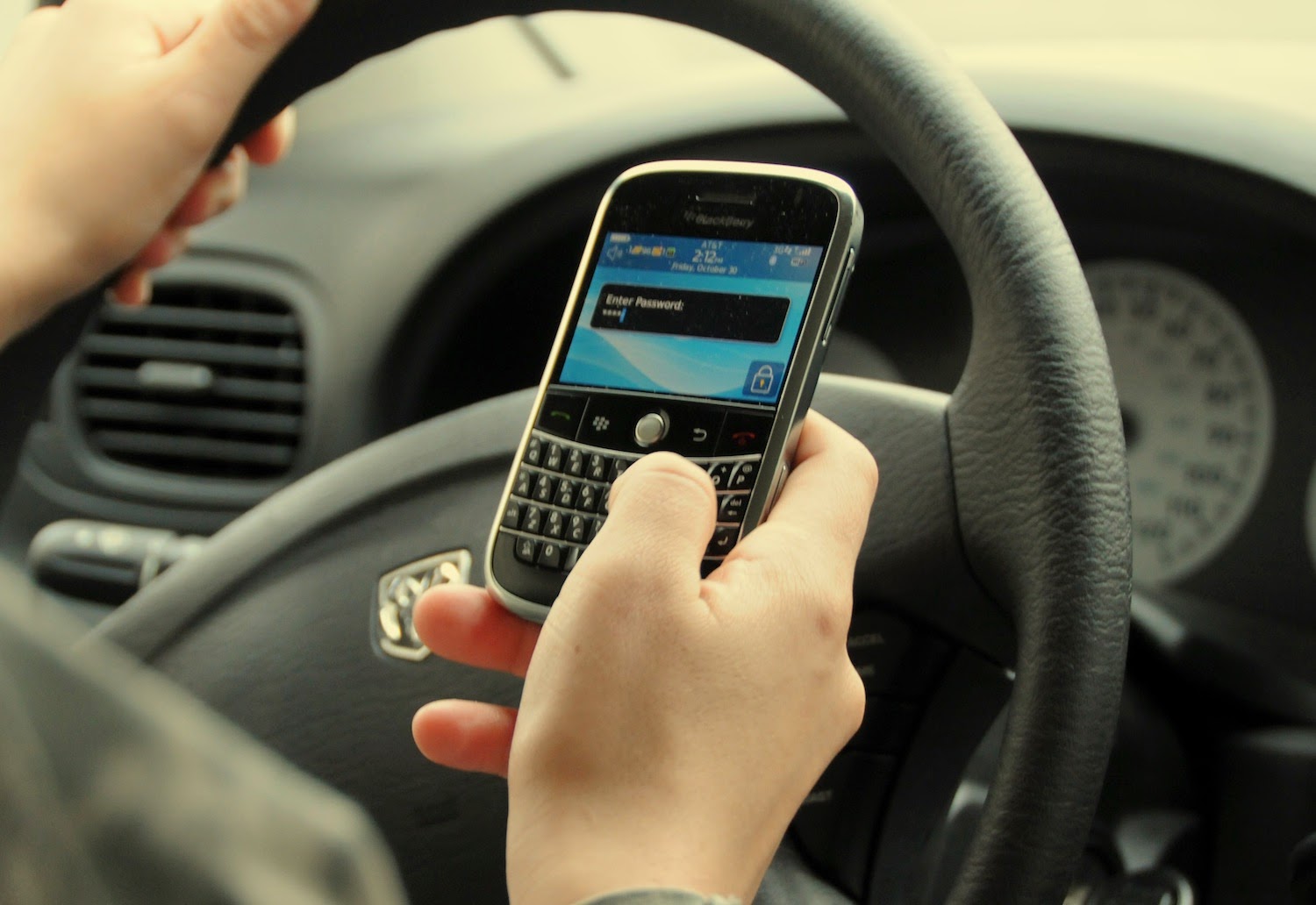 In my state, Ohio, our legislature passed a texting law last year that they claimed was one of the toughest in the country. Forgive me, but that is either BS, or other states' laws are pitiful. Our law is a primary offense for those under age 18, but only a secondary offense for adults, making it ridiculous to try to enforce. Unless somebody is obviously a minor, it's very likely that they can text completely in the open with no fear of being pulled over. As a secondary offense, a person can only be punished for texting while driving after they've done something else -- like run a stoplight, (or hit a cyclist, God forbid). According to the Columbus Dispatch, the new law nabbed a whopping 273 people in its first year, carrying possible fines up to $150. That's not much of a deterrent. By comparison, 367,600 speeding tickets were issued in the same period.

The thing that bothers me about texting and driving -- the thing that brings it back to cycling -- is how dangerous it makes things for those of us who ride. A University of Utah study showed that people talking on the phone while driving have the same level of impairment as someone with a 0.08% blood-alcohol content. Texting and driving is even worse, as texting drivers are up to 23 times more likely to be involved in an accident than those who are unimpaired and undistracted. It used to be that if you saw a driver drifting out of their lane, or who was unable to maintain a steady speed, it was a good sign they were drunk. Nowadays, they're probably using their phone. What's worse is that alcohol-impaired drivers are more common at nighttime hours when cyclists are less likely to be on the road, but phone-distracted drivers can be common at any time, making them even more of a threat to cyclists.

Bob Mionske, of BicycleLaw.com, says, "As cell-phone use becomes ubiquitous, there are increasing numbers of documented incidents of distracted drivers hitting cyclists they never even saw. But too many in our society think that they are somehow different and can safely drive while using a mobile device. This is the same delusion that contributes to drunk driving -- people think they can 'handle' the alcohol."

Despite the demonstrable danger to cyclists and others, some states are still balking at passing anti-texting legislation, and those that have such laws are reluctant to make them more effective. Why? Is the telecomm industry putting up resistance? Who does someone have to bribe to get something done? In Texas, Gov. Rick Perry has long been an opponent of a statewide texting/driving ban, calling such legislation "misguided" as he vetoed a law passed by the state's legislators. Perry, along with the state's attorney general, says that he's against any law that attempts to "micromanage adult behavior." (Ironic in a state that defended its anti-sodomy law all the way to the U.S. Supreme Court). Meanwhile, one in five traffic crashes in Texas is caused by a distracted driver (Dallas Morning News). I shouldn't be surprised, considering that Texas didn't even have a law banning open containers of alcohol in cars until 2001. Maybe I shouldn't be so hard on our legislators here in Ohio.

I still don't have a smart phone. See, I'm not just a retrogrouch about bicycles. No, I have what I call a "dumb phone." It makes calls, and takes calls. It also takes blurry photos, but I can't figure out how to get them off the phone, so I don't count that feature. My car has bluetooth capability (surprise!) which allows me to make a "hands free" call with voice commands, but the University of Utah study and others have shown that "hands free" doesn't really make cell phones any safer when driving -- so I just make it a personal policy to avoid calls unless I'm stopped. I don't believe I'm suffering in any way by not being connected every minute of every day.

Unfortunately, it seems to me that we as humans may have something in our nature that leads us to self-centered behavior -- look at young children for instance -- it must be in our genes. What's worse, our culture today seems to thrive on that instinct, or maybe even reward it somehow. Constant use of smart phones just makes it easier for people to succumb to that tendency. My big question is how many cyclists, pedestrians, and others will have to be killed or injured before something actually gets done about it?
Posted by Brooks at 4:49 PM