A UCI decision to allow disc brakes on road racing bikes would be a "game changer," says an engineer and project leader at Cannondale. "It's a paradise. In the industry you can hardly find a brand that will not support that. First of all, a lot of them are bike freaks themselves so they can't wait to have that, and second, everybody realizes it's a huge improvement of the riding experience, so for them it's pure money because there's another reason why they should buy a new bike." (emphasis added by Retrogrouch) "As the riding experience is so much better than it was before, the market will grow a little bit because the higher the pleasure of riding, the higher the market will be." 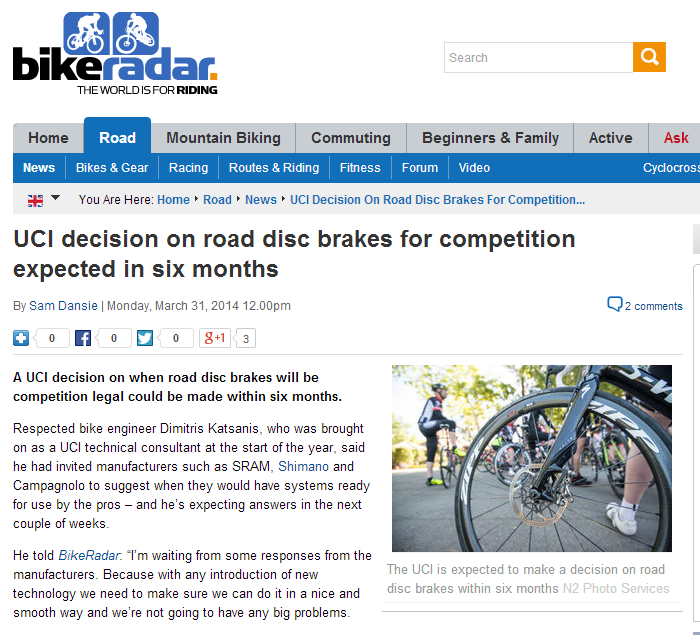 How exactly is the riding experience with disc brakes "so much better than before." And how is that going to make the market grow? Are there people out there who don't ride bikes because they're waiting for disc brakes? Are people laying around on their couches, or sitting in their cars thinking, "Sure, I'd love to get out there and ride a bike, but not until the UCI approves disc brakes"?

No, I think the most accurate and revealing part of the quote above is "it's pure money because there's another reason why they should buy a new bike." This is another case where they are counting on people who already own bikes (probably several) to see their old rides as obsolete. To give them a new itch that can only be scratched with something billed as a "huge improvement" that is actually nothing of the sort.

I reported last month about how the UCI appointed a new technical advisor, Dimitri Katsanis, who aims to scrap a lot of the the restrictions that reputedly hold back the march of technology in professional bicycle racing. I just read in BikeRadar that a UCI decision on disc brakes is expected within 6 months (which way do you suppose they'll decide? Hmmmm . . .) And in a separate article that the 6.8 kg (15.99 lbs) weight limit is soon to be dumped as "outdated," to be replaced with an ISO standard for minimum safety of bikes and components.

About that minimum weight standard. I'll admit, the 6.8 kg number was pretty arbitrary. It came about at least in part because some thought that to go below that number might result in dangerously light bikes -- bikes that wouldn't hold up in competition. The thing is, though, that even above that number there are failures of frames and components (don't wait to see that in the manufacturer's ads). Another reason for the UCI's limits on technology -- one that often gets ignored -- was that they want (or wanted) to keep bicycle racing as a competition of men, not a competition of technology.

I shouldn't get too worked up about this -- these regulations only impact the bikes ridden in UCI-sanctioned races. Weight-obsessed roadies and technophiles are already buying sub-15 lb bikes and disc brakes, convinced that somehow these things will transform them from mid-pack finishers to winners. But obviously, the industry is salivating at the thought of getting UCI approval of still-lighter frames and disc brakes because so many roadies out there want to ride what the pros ride -- so the regulations serve as a bit of a wet blanket on the industry's marketing enthusiasm.

But don't let them kid you that sub-15 lb bikes and disc brakes are improvements. It's all about pure money. Plain and simple.