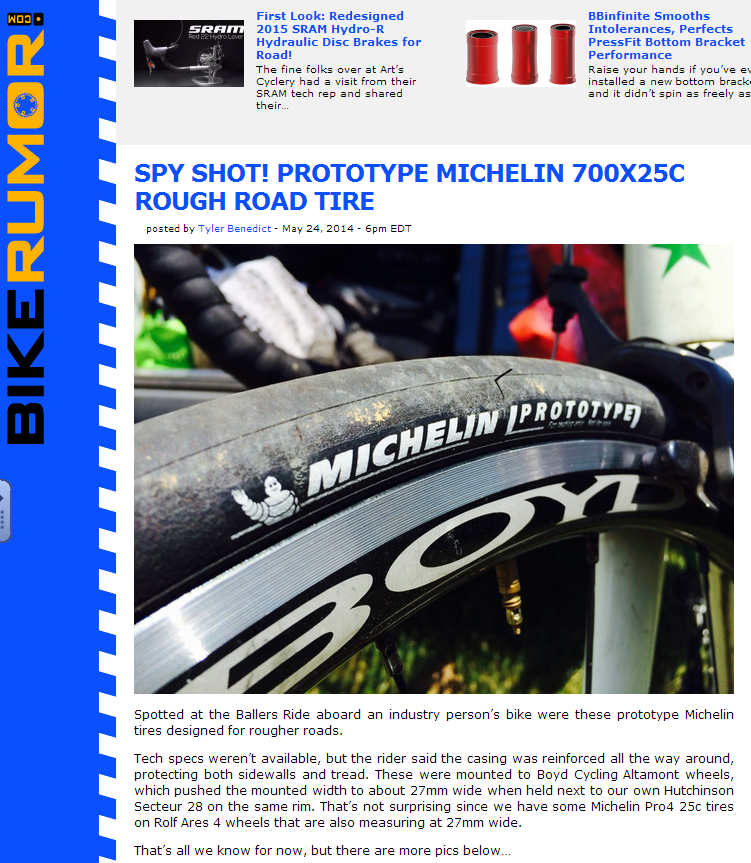 I saw this article on BikeRumor about some new prototype supposedly fat tires for "rough roads." What the heck is going on when a 25 mm tire (that may or may not measure as much as 27 mm depending on the rim it's mounted on) gets attention as a "rough road" tire?

Other than the fact that they have tougher casings, there isn't much info in the article about the tires themselves, as they were simply photographed by a participant at this past weekend's Baller's Ride in Virginia which was billed as "equal parts Navy Seals training, Outward Bound, and a Mensa meeting for the most vain of the vain, all coupled with some brutally hard riding and dining." The event actually sounds like it might have been a good time, being a gathering of some great names among frame builders and other industry folks, and some of their invited customers and friends, and involving some pretty tough riding over a range of terrain.

About 25 mm tires being considered "fat," I think the pictures speak well for themselves. Crammed under a short-reach brake and into a carbon fiber fork with minimal clearances, the tire obviously pushes the limits of what will fit -- but that just reveals a major design flaw in the bike, not an advantage of the tire.

Want a fat tire for rough roads? How about 32 mm? That's a rough road tire. If that won't fit into the frame, then someone probably paid too much money for a bike that's good for only one thing -- going fast on perfect pavement on sunny days. My "raciest" bike is currently shod with 29 mm Challenge Parigi-Roubaix tires which give a great ride on pavement, even when it's broken and patched. Judging by the visible clearances, I'm pretty certain 32s would fit. My Rivendell has 33.3 mm Jack Browns, but could easily accommodate the 38 mm Barlow Pass tires from Compass Bicycles. Despite the old thinking on tire volume, road tests have shown that high-quality large-volume road tires do not slow a bike down, and in fact, have no real down-sides, even for those craving go-fast performance.

One "Baller's Ride" participant who had the right idea was Richard Sachs, whose bike for the event was his own cyclocross racer. The tires on that bike look like they are probably at least 35 mm. Oh -- by the way, note that Sachs's bike (almost all of his custom-built bikes, for that matter) is decidedly disc-brake-free. Sachs is no retrogrouch, but I couldn't help but smile when I saw his thoughts on why he "won't ever make a disc brake road or cyclocross bike." "Heavier. Inelegant. Unnecessary. Driven by marketing of the big brands." Couldn't've said it better myself.