After the previous post on the Hour Record, I thought a good follow-up would be to look in more detail at the bike that Eddy Merckx used in his 1972 record. Over the years there have been a number of bicycles shown or displayed claiming to be THE bike that Merckx rode, and they all have subtle differences between them, but there can be only one. To find out more, I put the question out to members of the Classic Rendezvous group because they have proven to be a fount of knowledge on vintage bikes. Oddly enough, we found that identifying the true Merckx Hour Record bike to be a bit of a puzzle.

First, let's consider what is known about the bike. The bicycle frame was built by Ernesto Colnago especially for the record attempt. A Bicycling! magazine article from July 1974 stated that Cino Cinelli also had a hand in the design of the bike, at least in an advisory role. Several sources have claimed that it was built with specially butted steel tubing from Reynolds, with wall thicknesses of 0.7 mm, and about 0.37 mm in the thinnest section! By comparison, typical Reynolds 531 tubing would have been 0.9/0.6 for the down tube (0.8/0.5 for the top and seat tubes). It is generally known that the Campagnolo crank was milled out and the chainring cut away for lightness. Gearing has been widely reported to be 52x14.

Here are a couple of photos and a video taken during the actual ride:

As already stated, after Merckx's record ride, a number of bikes have been represented as THE Hour Record bike. Various and reliable sources have reported that there were at least two bikes built by Colnago for the record attempt -- a primary bike and a backup bike. I also have no doubt that at least several sets of wheels, bars, stems, and other components were brought to Mexico City in preparation for the event, and since components can be swapped so easily, it would be difficult to say exactly which parts were used and which were the spares. It is also indisputable that replicas have been made. The aforementioned Bicycling! article stated that replicas of the bike were making the rounds at bicycle industry shows as early as 1973.

The following are several bikes that may or may not be the real Merckx Hour Record machine:

A Classic Rendezvous friend called attention to this video on YouTube: an interview between Paul Sherwen and Eddy Merckx from 2002. In it, Eddy shows off the Hour Record bike -- without a doubt, the real deal. 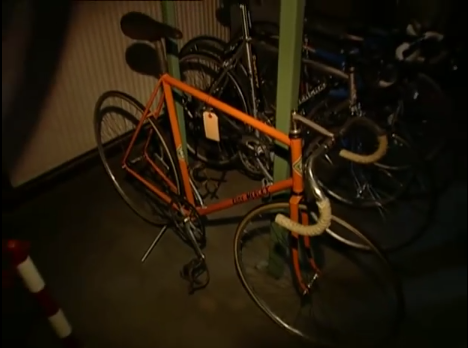 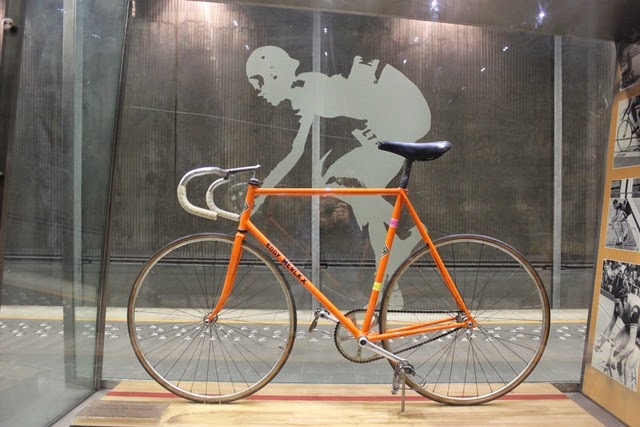 Okay - any verdicts? Well, although one could potentially say these photos represent as many as four or even five different bikes, it is also plausible that what we have here is really just two different bikes that have gone through a few parts swaps and several changes in paint and/or decals.

I think it's safe to say that the bike shown in the Paul Sherwen interview is the "real" bike. That's an easy one. What about the others?

The bike from the NY bike show photo has a lot going for it for authenticity -- most of the components match up with what is known of the real bike, though that can also be said of the Bicycle Guide/Il Vecchio bike (are they the same parts?). The NY bike also still has one of the Windsor stickers on the frame. Then again, it also seems to have that engraving on the fork crown that is missing on the bike from the Sherwen interview.

Several reputable sources, including Jan Heine, believe in the authenticity of the bike from the Bicycle Guide story. If that is the bike, then it had to have had its decals changed at the very least, but otherwise matches up well with what is known of the 1972 record bike from contemporary sources.

The bike in the Eddy Merckx Metro Station in Brussels looks like it has many of the identical components to the Bicycle Guide bike and the bike from the NY show. And of course we see Eddy himself saying that his bike is going to a museum in Brussels. The paint and decals appear to be new, so if it is the same bike, then he had it repainted before donating it.

The one that seems to be the most different is the bike displayed at the GdI Hall of Fame. The frame still has what appears to be the remnants of a Windsor sticker on the seat tube, but the downtube decal is different. Some of the components don't match up to the other bikes shown or to what we know of the actual record machine. Was that possibly the backup bike, built up with a mishmash of parts from the period?

If we are to accept that the bike from the NY show, the Bicycle Guide article, the Sherwen interview, and the Brussels metro station are all the same bike, then we have to assume the following: The bike had a different fork when it was shown in NY in the 70s; It had new decals and possibly new paint applied before being photographed for BG in 1990 - 91; It had new paint and/or decals applied again in the early 2000s before Eddy showed it to Paul Sherwen; And the bike had a complete repaint done before going to the metro station museum. There also would have to have been a few minor parts swaps (such as handlebars, etc.) along the way. On one hand, it seems like a lot of new paint and/or decals -- then again, it was also over a roughly 30 year span. It is plausible. Not only that, but any of us who are total bike nuts know that we all have at least one old bike that we never stop fiddling with -- always making little changes, swapping parts, etc. If we assume that Eddy Merckx is a total bike nut like some of us are, perhaps he looked at his Hour Record bike as just another bike in his collection, constantly evolving -- not as some kind of museum piece to be preserved exactly as a historical artifact (well, that's what it is now, I suppose).

Sorry -- no definitive answers, but an interesting puzzle.

My thanks go out to my Classic Rendezvous friends for all their input and insight.

Thoughts and comments are welcome.

UPDATE 5/27/2014: I recently received the following message from Nelson Frazier of Gita Sporting Goods, which had arranged the loan of the bike that was in the Bicycle Guide article from 1991: "The hour record bike that we loaned to George Gibbs at Il Vecchio in Seattle is the same bike that is now on display in Brussels. I think there were only two bikes, but of course can't confirm that." Thank you, Mr. Frazier -- that is very helpful!