And to Think I Made Fun of It 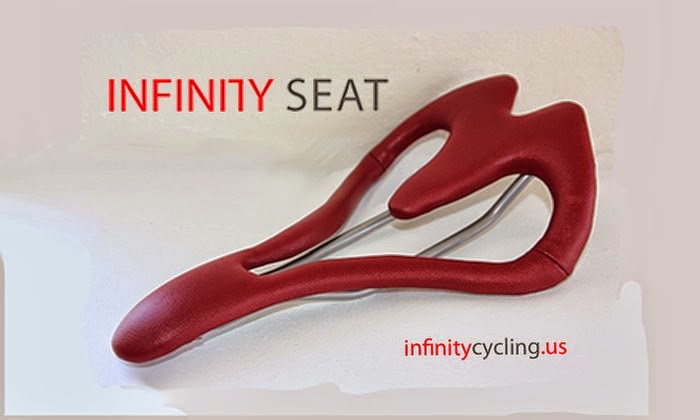 Back in February I poked fun at the Infinity Seat, an innovative new approach to a bicycle saddle that bucks conventional wisdom and distributes the rider's weight to the muscle mass of the buttocks, rather than trying to support the sit bones. I said at the time that the inspiration was probably a toilet seat.

I still think it's goofy, and am still a firm believer in a classic Brooks B-17, but I got this email yesterday from Diane at Infinity, thanking me for writing about the Infinity Seat (did they realize I was making fun of it?) and giving me an update:

"Race Across America (RAAM) finisher Michael McClintock, age 56, achieves his dream of riding across America while utilizing the revolutionary Infinity Bike Seat. In his second attempt to conquer this legendary bike race, McClintock's wife Robyn searched the internet to find a bike seat that would help with saddle sores and butt pain. Mr. McClintock, an electrical contractor from Wooster, Ohio was determined to finish this race and his wife was going to help him find the bicycle seat he needed to reach his goal."

To be honest, my interest in this has less to do with the Infinity Seat, and more to do with the fact that McClintock is a local guy (Wooster is only about 35 miles from my home, Akron) and was sponsored by my local bike shop, Century Cycles.

Mike was riding with a cause, to raise awareness and money for Central American Medical Outreach (CAMO) and for the American Cancer Society. All in all, it's quite an achievement.

McClintock previously attempted RAAM in 2011, but after making it nearly 2,300 miles in 8 1/2 days, had to withdraw for medical reasons. His wife, Robyn, stated that in 2011, "Mike was so uncomfortable to the point he was off the bike frequently and never finished the race." Even in training for this year's race, it is said that he "struggled with saddle sores and questioned whether he could make another attempt." But apparently, he credits the unusual saddle as being "instrumental in making my attempt successful." And to think I made fun of it.

I'm glad to see a local guy finish RAAM and fulfill one of his dreams -- there's a lot to be said for that. Congratulations, Mike -- and Century Cycles. And yeah, you too, Infinity Seat.

Still not giving up my Brooks saddles, though.