Who's in Whose Way?

While I was out of town riding around Maui, disconnected from the internet and the news back home, I missed this enlightening story from my hometown paper, the Akron Beacon Journal: 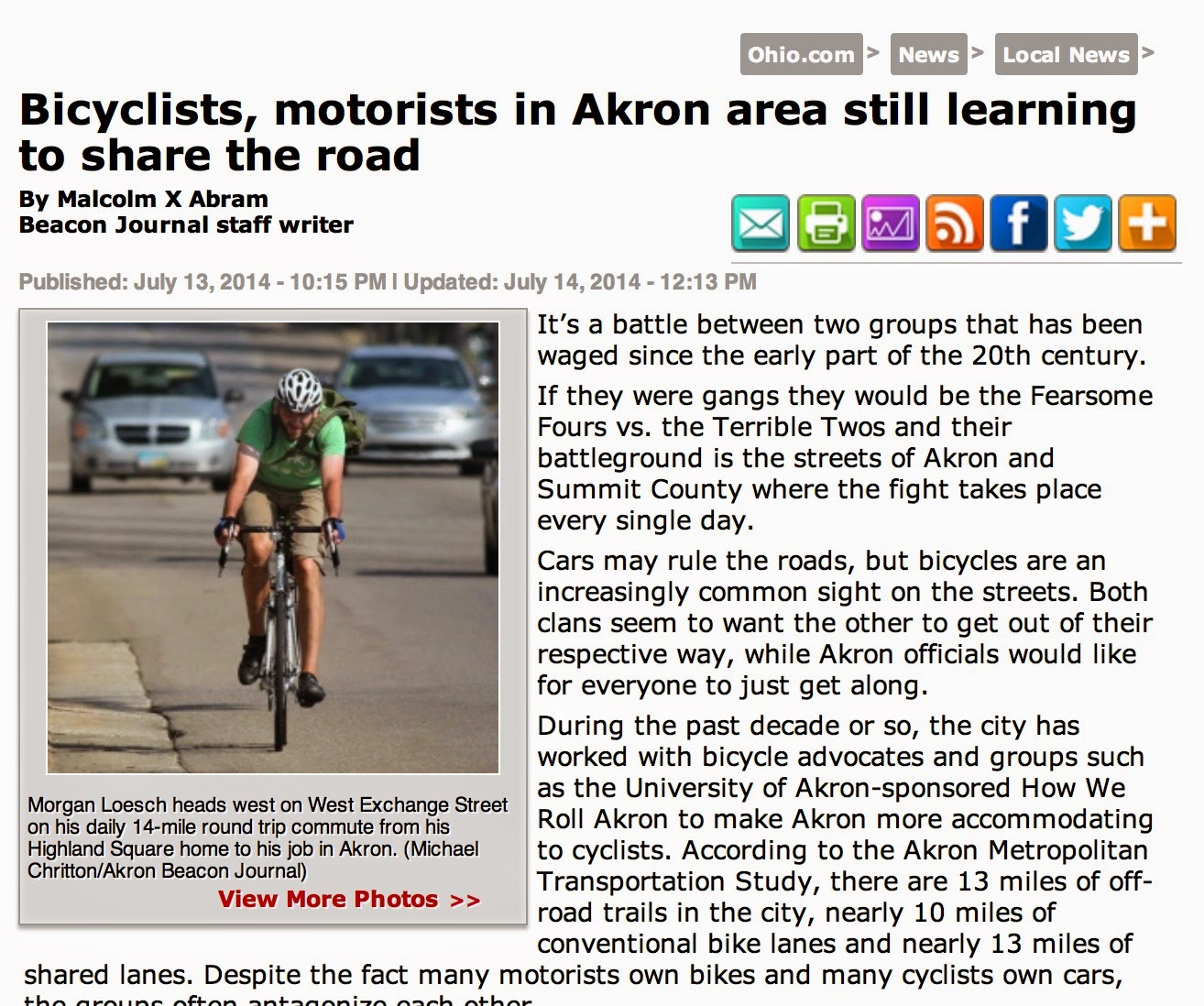 Apart from offering no real insights into the problems of sharing the road, Malcolm X Abram (who would probably do better if he stuck to writing music reviews) tries to walk that "presenting both sides" line, yet unwittingly reveals the irrational hostility directed at cyclists by many drivers -- though I doubt anyone who is not a cyclist would even notice.

Dubbing motorists as the "Fearsome Fours" and cyclists as the "Terrible Twos," Abram claims that "both clans seem to want the other to get out of their respective way." I'm guessing he probably hasn't ridden a bike since he got his drivers license, because while I know without a doubt that many motorists feel that way, I don't know any cyclists who do. Cyclists know they are the minority on the roads -- and a very vulnerable minority at that. To even suggest otherwise reveals a car-centric point of view.

The article then goes on to talk about how many miles of bike lanes have been added by the city as if it's a lot somehow. Now, I realize that Akron is not a very big city, but "nearly 10 miles of conventional bike lanes" and "nearly 13 miles of shared lanes" is really nothing -- and those lanes do nothing to promote "sharing the road" or safety for cyclists. Population-wise, Akron is pretty close to Madison, Wisconsin -- where they have well over 200 miles of bike lanes and paths. I realize that Madison is hardly typical, but still, if you ask me, 23 miles is barely worth mentioning.

To get the bicyclists view, Abram quotes Doug, a friend of mine who works at a local bike shop, Century Cycles. Great! Doug points out that the more cyclists on the roads, the more aggravation is seen from drivers. I can agree with that -- to the motorists' point of view, it just means more "obstacles" in their way (wake up, drivers -- those "obstacles" are people!). But then the article gives us the drivers' perspective:

"For some drivers, it's when two-wheeler operators want to have their commuting cake and eat it too that spark flurries of four-letter words."

"I have no problem with cyclists if they follow the rules," Robert Godward said while enjoying a beer with a few of his buddies. "They can act like a pedestrian or they can act like a vehicle. You don't get to switch back and forth as you see fit. That's when I have a problem," he said, adding he's indulged a few fantasies about moving cyclists out of his way with his car.

Actually, I think people like Godward actually DO have a problem, whether cyclists follow the rules or not. And while some would like to say that this is just one guy who doesn't actually speak for all motorists, I believe he speaks for a lot of them. Perhaps it's just as significant (maybe more so) that while the majority of motorists may not fantasize about killing cyclists, they're also not likely to call out a jackass like him for his ignorance. Threaten somebody with a gun, you're a menace. Threaten them with a 3,000 - 4,000 pound vehicle, and you're just another driver, and a "credible" source for a half-assed news story. The only people who would take offense at a "harmless joke" about maiming or possibly killing cyclists with a car are the cyclists themselves who know too well the reality of car-vs-bike collisions. And if we get offended, we'll be told that we're just being overly sensitive cry babies.

Then one of the guys at the bar says bicyclists should follow the rules of the road -- and wear a helmet! Umm, that's not a rule of the road. And while I usually wear a helmet, I have no illusions whatsoever that it will do me any good when his buddy acts out on his fantasy to get me "out of his way" with his car (or should I say, deadly weapon of mass destruction?).

How about the line "they can act like a pedestrian or they can act like a vehicle. You don't get to switch back and forth as you see fit"? Actually, we can. It's one of the advantages of a bicycle. Complaining about that is kind of like complaining about bikes because they don't use gas and don't pollute the air. Cars have advantages, too -- like being able to carry the whole family and all the groceries and other cargo very quickly over long distances. We don't hold that against them. Now, should cyclists switch back and forth willy-nilly, hopping from the road to the sidewalk to zip past traffic, then dart back out onto the road? Hell no. That bugs me as much as it bugs any driver. But the ability to get off a bike and become a pedestrian for a bit is one of the things that makes a bike really convenient at times.

The other thing revealed here is the perception that cyclists don't follow the rules of the road, or the notion that that somehow justifies the treatment of them. There are some really ignorant cyclists on the road. You can often identify them because they're the ones riding the wrong way on the road, or riding on the sidewalk (which, ironically, is where a lot of motorists want them). If you're a cyclist, eventually it gets thrown in your face that "you bikers always blow through traffic lights." Several problems with that. First -- I believe that most serious bike commuters (which the ABJ article seems to be focusing on) do actually obey lights and signs. As for those riders who do ride through the lights, I'm quite sure that most of them do it only after making sure the coast is clear. But those riders are mainly a danger to themselves, not others.

On the other hand (and I've pointed this out time and again, so I apologize for being repetitious) we all see cars blast through lights all the time. Every day. Whether I'm in my car, or on my bike, I don't think a day goes by that I don't see at least a couple cars do it. There are some intersections (any town, any city) where it's practically standard operating procedure that at least one or two (or three) cars fly through just as the light is turning red. Often, there will be another that blasts through with the pedal to the floor when traffic going the other direction has already gotten the green light. Drivers have the uncanny ability to ignore that. Some will even deny vehemently that it happens. "Those bicycles are worse!" they'll argue. But I've argued time and again that the average motorist sees far more driver infractions every day than they see bicycles on the road (law abiding or otherwise) in a week. Which is the bigger threat to others?

Ultimately, Abram's article offers no real insights -- just leaves us with the thought that the "terrible twos" and the "fearsome fours" should just learn to get along, but probably won't. Brilliant. And as much as I'd like to chalk up this lousy article as another sign of the decline of the ABJ, unfortunately it's typical of news media stories that deal with bicyclists.
Posted by Brooks at 4:04 PM