By now, anyone reading this already knows that Vincenzo Nibali won the Tour de France yesterday, the first Italian winner since Marco Pantani in '98. Nibali was just a kid when that happened.

Some people will say he only won because the favorites, like Chris Froome and Alberto Contador, were unable to finish. Given the performance I saw, I think Nibali just might have won anyhow. Besides, I'm not the first one to say that in order to finish first, one must first finish. The best way I can describe Nibali's riding in the Tour is "Smart." He stayed safe when he needed to, and made moves (good moves) when it was necessary. It's like he did everything right, and nothing wrong. Not only that, but he really surprised people with the depth of his riding -- like his strong performance on the cobblestones, for instance. His team, also, was up to the task of defending a Tour leader, and all nine Astana team members finished the race.

Nibali won four stages on his way to the overall victory. The hilly 2nd stage from York to Sheffield got him the Yellow Jersey, which he held until the 9th stage. He won the 10th stage in the mountains, getting the Yellow Jersey back again -- and held it to the end of the Tour. He also won stage 13, Saint Étienne - Chamrousse, and stage 18 with an impressive acceleration on the Hautacam. His performance in the mountains was so good that Nibali almost won the King-of-the-Mountains Polka Dot Jersey in addition to the Yellow.

In the 2014 Tour's only time trial, on the penultimate stage, Nibali was faster through the 54 km course than everyone but World TT Champion Tony Martin, thereby adding more to his lead in the overall standings. In the end, he had a 7:52 margin of victory when he crossed the line in Paris -- the widest margin in 17 years. Only two other people wore the leader's Yellow Jersey during the whole 3,664 km Tour -- Marcel Kittel, winner of stage 1, and Tony Gallopin, who wore it one day after stage 9. It was impressive.

It's a shame that, in the "Post Armstrong" era, people will question (are questioning) if Nibali raced clean. Chris Froome was pressed with the same questions after his win in 2013, and Bradley Wiggins faced the same skepticism in 2012. I say it's a shame because on one hand, people deserve the benefit of the doubt. On the other hand, I think it's an unfortunate fact of life for racers, at least for the time being, that they're going to end up paying for the crimes of others. We've all seen the fairy tales, and we've seen how too many of them turned out. I want to believe it was a clean victory, (and Froome's and Wiggins's, too) but part of me waits for the other shoe to drop. It doesn't help that Nibali's team, Astana, and their director, Alexander Vinokourov, have a "troubled" past in that regard. I'm not bringing that up to cast doubts. I truly hope it really is a new era.

I should also point out that Nibali's strong TdF win shouldn't be a surprise. He never exhibited some kind of inexplicable meteoric rise in performance -- but has been building, developing, and improving over the last few years. He won the Vuelta a España in 2010; finished 2nd in the Giro d'Italia in 2011; finished 3rd in the 2012 TdF behind Wiggins and Froome; and he won the Giro and finished 2nd in the Vuelta in 2013. He is now in an elite group of racers to win all three "grand tours" and it will be great to see what he continues to achieve in the future. 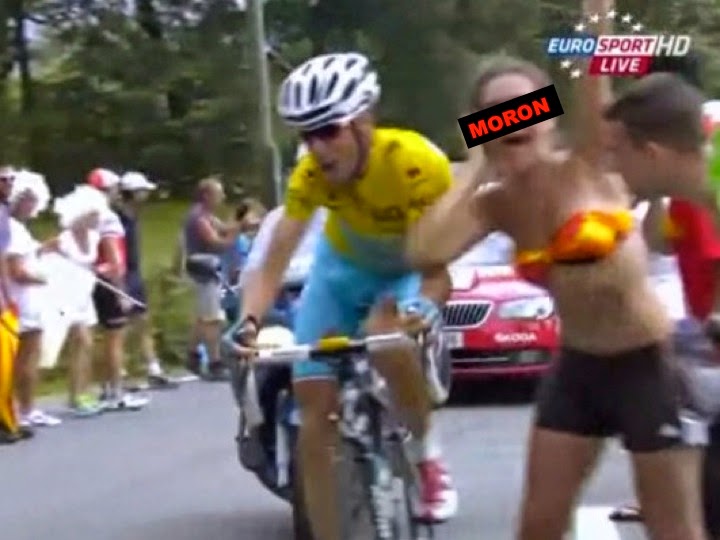 If the 2014 Tour de France is remembered for anything besides the impressive win by Nibali, it might also be as the "Tour de Selfie." Fans have always been a factor in bicycle racing -- more than in most other sports. There really aren't many sports where the fans can get so close to the athletes as in bicycle racing. On mountain stages, particularly, fans often crowd on the ascents to cheer (or jeer) the riders -- often crowding in so close that it's remarkable that the riders can get through at all.

This year, the latest phenomenon is the "selfie" -- where ignorant, self-centered, self-obsessed people think nothing of stepping out into the road (usually with their back turned to the racers) to get that picture of themselves in the midst of the action. It got so bad this year that crashes and many near-misses were a regular occurrence -- the ripple effect of one such crash took Andy Schleck out of the Tour. And in some stages, the riders took to smacking smart phones out of the hands of the fans. 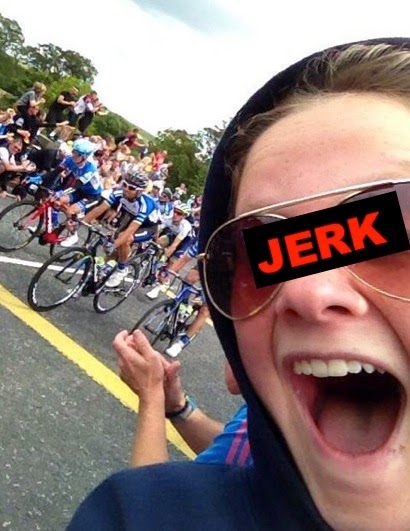 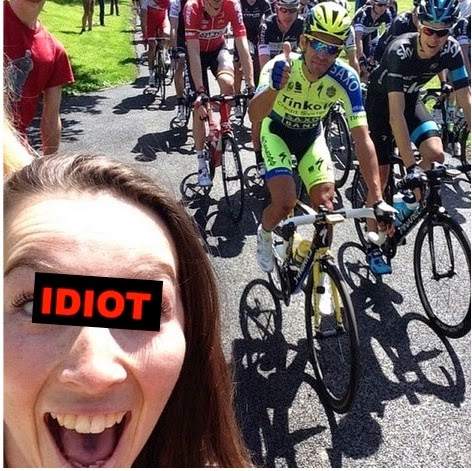 I've said before that people have an unfortunate tendency toward self-centeredness, and I believe so-called smart phones (I prefer smart people to smart phones) and social media like twitter, snapchat, and so many others, do a lot to enable, intensify -- even reward -- that self-centered behavior. The word "selfie" is a new one in our language, but it's awfully appropriate. Self-centered, self-obsessed, selfish . . . selfie.
Posted by Brooks at 11:17 AM