Some people would never consider riding in jeans. As someone who isn't hung up on the notion that I always have to wear cycling clothes when on a bike, I'll ride in jeans now and then as long as I'm not riding too far -- like pedaling around the neighborhood, riding with my kids, or running some errands. But the thickness of the seams, and their location, means I don't want to ride in jeans for more than a few miles. But now there is a way to ride in jeans in complete comfort. 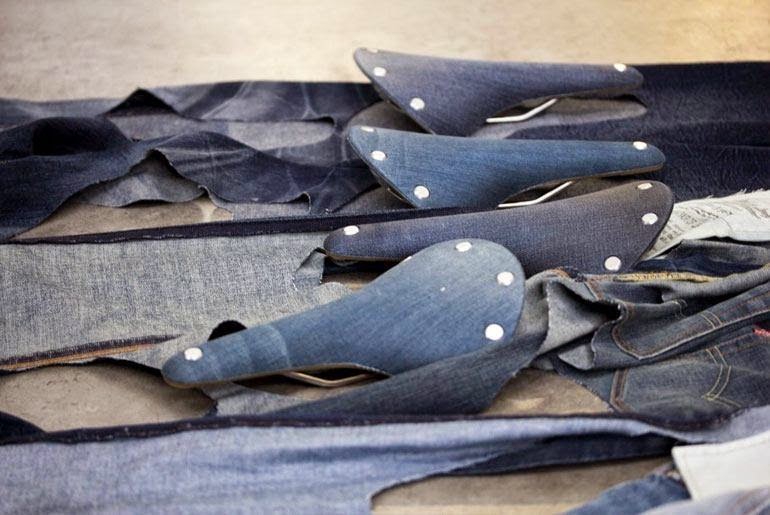 Brooks Saddles' new Cambium saddles have been making fans since their introduction last year. The vulcanized rubber saddles have a canvas top bonded to them and reviewers have praised them for good comfort, durability, and classic good looks. I'm still waiting for Brooks to send me one to try out for review, but my requests must be getting lost. (I'm sure that's it -- I mean, we share a name for cryin' out loud). I've long been a fan of their natural leather saddles (see HERE), but the new rubber saddle seems worth a try. Now, the latest addition to the line is a collaboration between Brooks and Levi's -- a Cambium saddle topped with recycled Levi's denim.

For the time being, the limited edition saddles are exclusively available at Levi's Commuter Workspaces in Brooklyn, Los Angeles, and London. In October they will be available from the Brooks online shop. One interesting twist on the recycled denim idea is that Brooks and Levi's are inviting people to bring clean used denim to one of the three Workspaces so it can be re-used to make "as many saddles as possible." People who do so would get 20% off from Levi's and from Brooks, along with a chance to win one of the saddles (the collection began earlier in July). I think it would be pretty cool to get the saddle made with your own vintage jeans, but I doubt there's any provision to make that likely. (Think about it, Brooks!)

To my eye, the saddles look pretty classy, and due to the way that every pair of jeans wears and fades a little differently from every other, each saddle would be slightly different. No two alike. Between the looks and the reported comfort, I think the saddles would be a complement to a lot of classic-styled bikes, new or old. The one thing I can't seem to find out anywhere is the price. The regular Cambium C-17 sells for around $140 (online prices vary a little -- shop around), so that's at least a frame of reference. By the way, the classic Brooks B-17 sells for roughly the same price nowadays, depending on the options -- titanium rails push the price near $200!