Decisions, decisions. Don't ask the bike industry to make them. And agreeing on standards? Forget that too. Bottom brackets and headsets are both in such a state of flux that there's a good chance that a lot of new bikes sitting in showrooms right now will be as obsolete in a couple of years as a Betamax video player (or an HD-DVD player, for you kids who might be reading this).

Joining those components in a race towards confusion and forced obsolescence are hubs and axles.

Seemingly forever, bicycle wheel axles have been 10 mm for back wheels, and 9mm for the front. The width of back wheels went from 120mm in the days of 5 speed freewheels, grew to 126 for 6 and 7 speeds, and generally up to about 130mm for 8, 9, and 10 speed cassettes (for road bikes that is -- mountain bikes were often more like 135mm). Front axle widths have been consistent at 100mm for pretty much everything other than children's bikes. In addition, the simple quick release system we're all familiar with has been a feature on higher-quality bikes going back to before most people reading this can remember.

So, what is driving the current change and confusion? Simple answer: Disc brakes, and thru-axles.

Mountain bikers, who were the early adopters of newer disc brake systems, started having problems with braking forces overwhelming the traditional quick release, and pulling the front wheel out. This was particularly a problem with the downhill bikes which have evolved to be more like engine-less motorcycles than bicycles. I'm guessing that most "regular" mountain bikers, especially those who know how to properly use a quick release, didn't have serious problems (please forgive me if I'm wrong about that). Anyhow, the chosen solution to the problem was to ditch the traditional quick release in favor of a thru-axle design. Not only that, but the size of those front axles continued to swell so that eventually some downhill bikes started using massive 20mm thick axles (think about it - that's double the thickness of the traditional rear axle!). I can only suppose that the rationale was not only about the braking forces, but also the forces directed on the front axle from big hits suffered in their downhill runs. The way I understand it is that many of the mountain bikes out there now have settled on 15 x 100mm thru-axles for front wheels, and 12 x 142mm thru-axles for the rear.


Now with frame and component makers pushing disc brakes for the road, the question of hub standards is suddenly becoming another puzzle. And the solution to that puzzle keeps changing. Can the industry agree upon a standard? Are you kidding?

The component makers seem to be waiting for the bike companies to make a choice, while the bike companies are waiting for component makers to come up with the answer. Smaller bike companies are waiting to see what the big boys are doing. In the meantime, there is a hodgepodge of options floating around out there. Some companies are sticking with traditional quick release. Some are moving to thru-axles, but the exact dimensions are up in the air. Some, like Trek, are betting on 15mm front axles to keep things consistent with mountain bikes. Others, like Specialized, think 12mm axles will work fine for the road. On the back, the current choices seem to be the mountain bike "standard" (there's that meaningless word again) of 12 x 142mm -- which seems really freakin' wide for a road bike! Others are looking into 12 x 135mm. Some companies are hedging bets by offering different versions -- some of this, some of that -- as if hoping the consumers will make the choice for them. 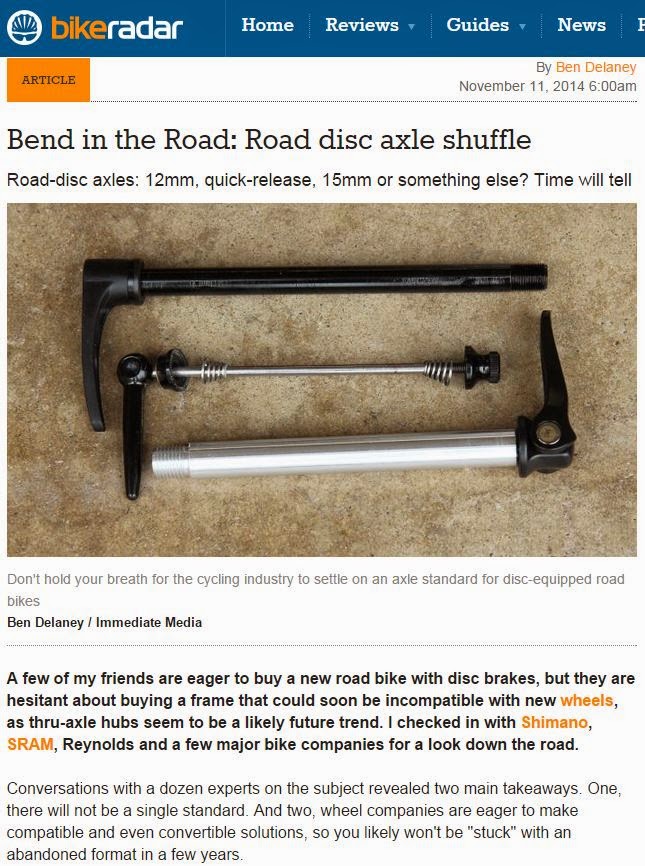 Personally, if I were in the market for one these new bikes (and I definitely am not), I'd be hesitant to plunk down a lot of money on the "latest thing," only to find out in a couple of years that I'd made the wrong choice when I can't find components to fit my frame.

A recent article on the subject on BikeRadar had a quote from an "industry veteran" who says such a worry is exaggerated. "The bicycle industry has done a good job of continuing support of older standards." I don't know that I'd totally agree with that. Quick release has been around for a long time, and will probably continue to be supported for a long time to come. But what about some other so-called "standards" (perhaps "fads" would be a better term) that don't stick around long enough to become really established before being superseded by something else? The industry veteran in that BikeRadar article went on to say "at a point, you can trade up. By then other systems will have advanced as well, making it, if you're so inclined, time for a new bike."

Basically, when this year's bike becomes obsolete, you'll just buy a new bike -- because the new stuff will be so much better anyhow. If that doesn't sum it all up, I don't know what else would.
Posted by Brooks at 10:47 AM