When I was going through all those old issues of Bike World, Bicycling, and Bicycle Guide from the '70s and '80s to find helmet advertising, one can imagine that I found and scanned lots more than I could use in the article on helmet history.

Here was one I almost used, then decided it was unnecessary for the content of that article - but I thought it was a pretty good ad: 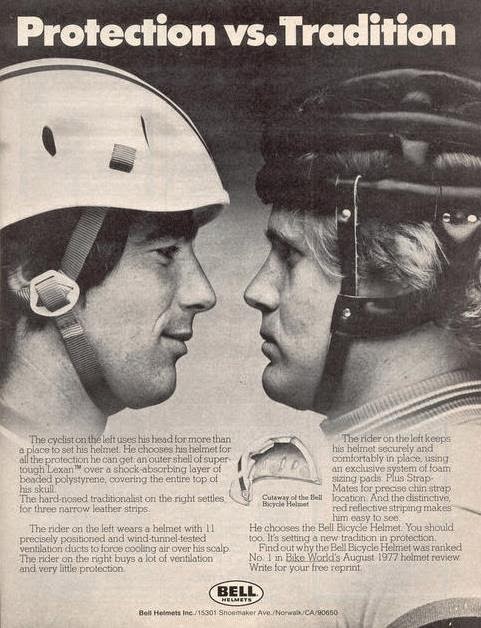 The "Protection vs. Tradition" ad ran in both Bike World and Bicycling a few times in 1978 and '79.

By the way, the leather hairnet worn by the "tradition" guy looks like one of the later models that I remember -- it's a bit bulkier, thicker -- probably in an effort to make them a little more effective, given the appearance of more hardshell choices on the market. That one looks like those that were sold by Kucharik in the later 70s and early 80s.

You might assume that a retrogrouch would always side with "tradition," but as much as I have a bit of nostalgia for the old leather helmets (I still have a couple of them, but keep them for nothing more than display) this is one area where I think newer really is better.
Posted by Brooks at 7:33 AM