Back in 2013, I wrote about press-fit bottom brackets, and all the various "standards" that have been introduced in recent years. I summarized it by saying essentially that the only thing "standard" about bottom brackets today is the creaking. Not surprisingly the creaking continues. What IS surprising to me is that the industry has gone almost two years without introducing yet another new bottom bracket "standard." 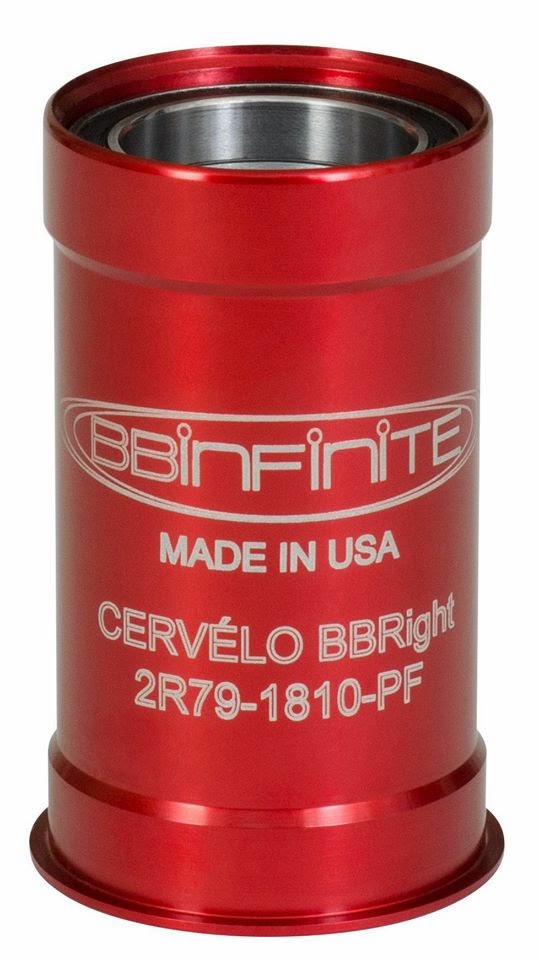 Several companies think they have the solution to creaking press-fit bottom brackets, and they want you to spend a lot of money attending to something that should never have been an issue on a $4000+ carbon fiber wünderbike to begin with.

One of these solutions is the BBInfinite. Funded on Kickstarter last summer, the BBInfinite is supposed to eliminate the variables in tolerances between the bottom bracket shell of the frame and the bearing mechanism by putting both the left and right side bearings into one complete shell, and the whole shebang is pressed into place as one single unit.

The BBInfinite sells for $165, and it does come with tool adapters for Park headset presses. Removal takes more special tools, including an air hammer (!) and those tools are sold separately. Some users will probably want to buy the tools anyhow, though I wouldn't recommend doing the job at home.


Now, the whole point in creating something like the BBInfinite is to try to eliminate some of the fit issues that come from inconsistent tolerances between the frames and the components. It seems like a good system in that the left and right bearing units will always remain in parallel with one another -- which may not be true of units that are pressed in separately from each side of the frame. But it seems to me that if the tolerances of the frame are off enough from those of the bottom bracket unit (even this one) it could still have problems with creaking. And on the company website, there are two posts headed up with something like "It still creaks." For example, "I installed a BBInfinite module and my bike is still creaking. What do I do now?" Various culprits are then named, from cranks to wheels, to cracks in the frame. Great. 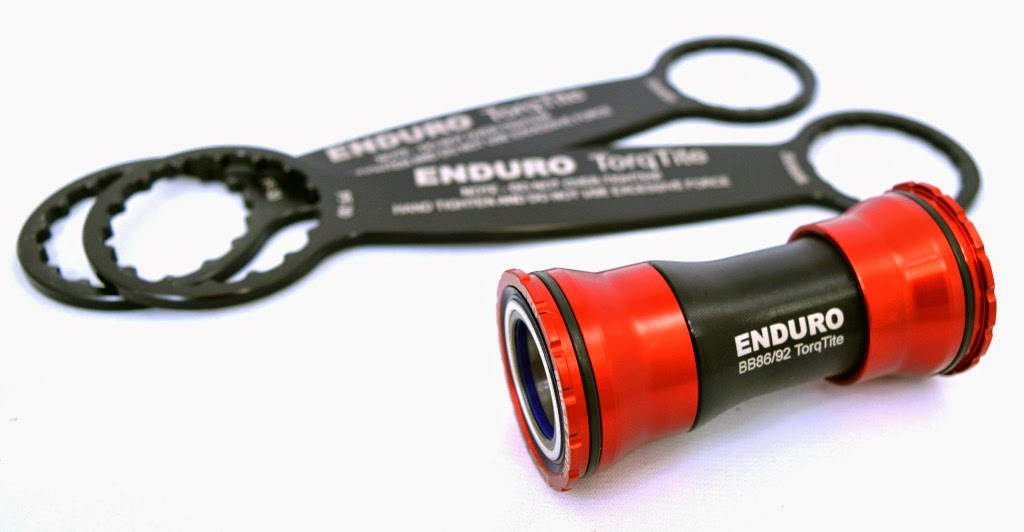 Another new entry into the Stop-My-BB-From-Creaking foray comes from Enduro. Called the TorqTite, it uses an innovative new method to eliminate persistent creaking. It threads together. That's right --- the solution to press-fit bottom bracket fit issues is to install a threaded bottom bracket. When the two sides are threaded together and tightened down, the frame is then essentially "clamped" tightly between the cup flanges to eliminate any movement that would then lead to creaking. It's like the next logical step in the evolution of press-fit bottom brackets. My prediction is that the next step is that someone will suggest cutting threads into the frame's bottom bracket shell to match up with the threading in the BB unit -- thereby giving a uniquely sure-fit, fool-proof solution.

Proponents of press-fit bottom brackets like to point out that headset cups have been press-fit into frames practically forever with no issues. To that I point out the obvious, that being that headsets are subjected to totally different kinds of forces than bottom brackets. Others will remind us that old-style American one-piece cranks, like those found on old cruisers, department store bikes, and on BMX bikes, have always used press-fit bearing cups without problems. Yes, that's also true -- so then what does that say about the state of the industry today that their manufacturing tolerances aren't even as good as those used on bottom-level bikes from the past? Proponents also love to talk about the increased stiffness in today's bottom brackets. To that I reply, just how stiff do bottom brackets need to be? Once things moved from the old square-taper bottom bracket spindles (typically about 17 mm in diameter), to the external-threaded cups with their 24 mm spindles, it seems to me that bottom brackets got as stiff as they'll ever need to be. Nobody can feel the difference, despite what the manufacturers proclaim in their ads.

Nope - I've said it before, but I'll say it again. The only real reason for going to these press-fit bottom brackets is to save time and money for manufacturers. No metal sleeves to be bonded into their popped-out-of-a-mold-somewhere-in-asia frames. No machining to precise tolerances. No threads to be cut. And it's apparently left up to various frame makers and component makers to come up with their own tolerance specs.

If somebody has a modern carbon fiber wünderbike with bottom bracket creaking issues, one of these two new products might offer viable solutions. But wouldn't it just be better if the industry picked itself a standard, and eliminated some of the tolerance variables? I think high-end bicycle buyers need to start demanding better.

On BikeRadar, I saw this recent rant from AngryAsian where he points out that "frame warranties almost always include a clause that covers 'manufacturing defects'." Therefore, if a person's frame is not made to the proper specifications for the intended bottom bracket system, then they should demand replacement. "You're sitting on a lemon - and no amount of sugar is going to make it taste good. . . Demand a correctly made version of what you bought. If the shell dimensions really aren't what they should be, your bike is defective and you're entitled to one that isn't." Maybe he's right. If people kept coming back to the manufacturers demanding replacement, instead of trying one "sure-fire" fix after another to solve the problems, something might actually done about it.

In the meantime, I'm quite happy riding along in silence on my steel framed bikes and their traditional threaded bottom brackets.
Posted by Brooks at 8:22 AM