NAHBS: Objectification Is Not Dead

A bicycle built by Allan Abbott and displayed at the recent North American Handmade Bicycle Show (NAHBS) has been the center of a fair amount of controversy around the net. Built in the form of a naked woman, the Signorina (as Abbott has dubbed it) has led to a lot of criticism of its creator, but some of the criticism has even been directed at NAHBS officials for allowing the bike to be shown.

I don't really even want to put up a picture of the thing, but I'd probably be doing a disservice to readers if I didn't show at least one. Some of the blogs out there are railing against the bike, and Abbott, and even NAHBS for promoting indecency -- then splashing huge pictures of the bike from every possible angle. If anyone really wants to see more, it shouldn't be hard to find. But on this blog, you'll have to settle for this:

Basically, what you have here is an oddly proportioned naked "woman" on her hands and knees -- not to mention, headless. It really just kind of grosses me out.

I'm not sure what it says about its creator that it even occurred to him to make this thing -- but it's even more shocking that he wanted to share it with an international audience.

What makes it worse (if that's possible) is that on his website, Abbott had a poll to get opinions on the bike: 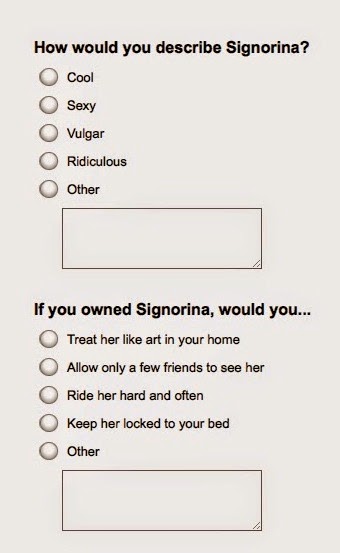 However, if you go to Abbott's website now to look for the poll, you will find that not only has the poll been removed, but the entire contents of the website have been taken down. Clearly, the negative outcry against him and his creation has been too much to take.

Here is a sampling of what others have had to say about Abbott's Signorina:

Red Kite Prayer: "Cycling has enough problems with being insufficiently hospitable to women without the addition of throwback attitudes that treat women as sex objects and objectifies their form. It only serves to make many of the women we do have in the sport feel unwelcome, which is totally unacceptable. The more rich and diverse a community is, the stronger it is."

Bicycle Times Magazine: "The Signorina from Abbott Cycles takes the objectification of women to a new level. Definitely sucks that this is how women are represented here. Especially since this object was one of about 10 women I saw at the whole show."

BikeSnobNYC: "It seems Allan Abbott forgot to include 'registered sex offender' in his bio. Though he did manage to squeeze in a rape joke, which is pretty much the same thing." (reference to the poll from Abbott's website)

The Daily Bike @ Adventure-Journal: "Because men have dominated and subjugated and objectified women for so many thousands of years, and because the bicycle culture is one of the last, worst refuges of sexist jerks, somehow it's okay that this appallingly misguided and frankly ugly frame was given space to be shown to others. . . And by allowing it, the organizers of the NAHBS are just as complicit in the offense as Allan Abbott."

By the way -- lots of photos on that last one.

It's sad to think that there are still people out there who think there's an audience for something like this. And if there is an appreciative audience, they probably aren't people I want to ride with. There's probably more I could say, but I'll just leave it at that.
Posted by Brooks at 9:28 AM