So, once you've bought your $1000 titanium derailleur pulleys and you still haven't captured all the KOMs on Strava, where else can you turn to blow ungodly amounts of money seeking those elusive and increasingly minuscule performance gains? A couple of readers have alerted me to an answer. 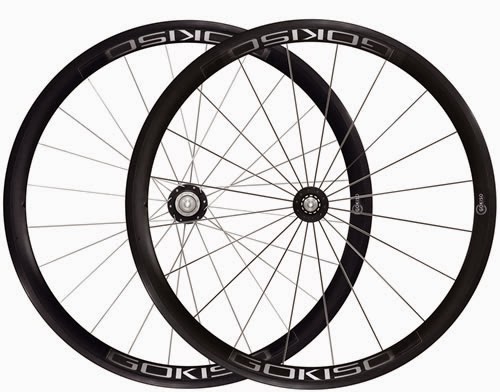 How about a pair of $8000 wheels with jet engine bearing technology?

If that sounds like a good deal to you, you'll need to check out the Gokiso full-carbon wheels. Made in Japan by the Kondo Machine Corporation, which reportedly makes bearings for Rolls-Royce jet engines, the Gokiso hubs and wheels features some pretty over-the-top engineering at a price that anybody in the 1% club should be able to easily afford.

If one doesn't want the full wheelset, individual hubsets are available from the company starting around $1800, or over $5000 for a full-titanium version. The hubs are designed to eliminate friction that you didn't even know hubs experienced, and have numerous little tricks engineered into them to keep the bearings always perfectly aligned and running freely regardless of the kinds of forces they might be subjected to. 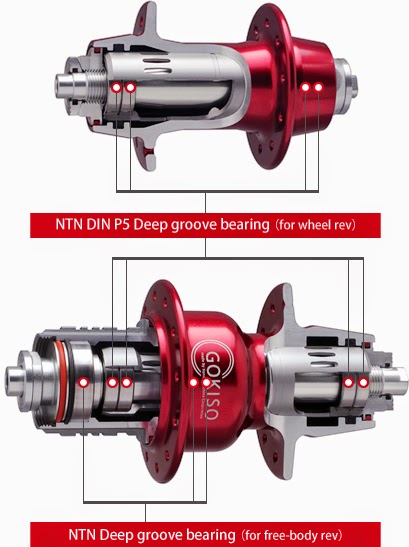 One of the features that people are touting about the Gokiso hubs and wheels is that it takes virtually no force to get them spinning -- and once they're spinning, they just keep going and going. Not only that, but they are capable of easily handling the kind of speeds that no cyclist is actually capable of reaching, with almost no friction losses. In tests by the company, they've had the hubs running at over 100 km/hr for 100,000 km without failure. In other tests they've spun the hubs up to 300 km/hr with virtually no heat generated, and no bearing failure. So if you spring for the Gokiso wheels, you can rest assured that when you're pedaling along at 300 km/hr, your hubs won't fail you. Check.

An independent test of the hubs conducted by CyclingTips.com in Australia checked how long it would take the Gokiso-hub wheels to spin down from 30 km/hr, compared to a typical high-end wheel. The tests were conducted with wheels mounted into a frame on a bike stand (not "on the road") and it's very clear from the following chart that the Gokiso hubs kept spinning longer:

As you can see, with the chain engaged on the sprockets (you know, the way people actually ride their bikes), the Gokiso hubs might spin as many as 10 - 15 seconds longer! But to experience the full advantage, it's clearly best to leave the chain off -- then, boy, look at the difference!

By the way, if someone buys the hubs, it's worth noting that this kind of technical wizardry is not user-serviceable. The company insists that all work on the hubs be done by a factory-certified mechanic, and for most people that means sending them away for service. Not only that, but they say that users should plan to have this service done annually (or more often with all-weather use). On the plus side, provided one follows these service requirements, the warranty on the top-level "Super Climber" hubs is 29 years (why 29 -- why not just make it a nice round 30?) or 10 years for the base model.

The folks at Gizmag are pretty pumped up about them too. You can tell they really "get" bikes there by this opening paragraph: "If you've ever watched the Tour de France and winced as all those skinny-wheeled racing bikes bounced over the cobblestone roads . . . well, you were right to do so." Oh yes - those "skinny-wheeled" racing bikes, just like they use in the Toor Dee Fraance. I know just what they mean.

Even Bloomberg Business News has written about the Gokiso wheels, but their assessment is surprisingly more down-to-earth. First, they compare the high-tech hubs to other over-the-top technological products, like Sharp's $1300 refrigerator that makes crystal clear ice cubes, or Panasonic's $1800 washing machine with smartphone connectivity. They then point out that the company has only sold about 30 pairs of the hyper-expensive wheels so far, before concluding with "The bottom line: Two inventors found it easier to build $7,900 bike wheels than to sell them -- a classic case of Japanese overengineering."

If all this sounds like a bit too much, just remember that you can get a pair of Phil Wood hubs, which are about as good as anyone can possibly need, for $600 - 700 (or less, depending on the model). Then again, I'm still using a pair of fully rebuildable Campagnolo Record hubs from the '70s -- still spinning like new.
Posted by Brooks at 12:44 PM