"For me, cycling's about more than just the racing. It's a strong part of the culture, but it's not everything. Ever since I first rode a bike, a sense of freedom and escape has been a large part of my life: I've always loved riding my bike. I truly believe that there is no other sport like cycling. It's individual, it's a team sport, it's social, and, although grueling, it's one of the most rewarding sports in the world." 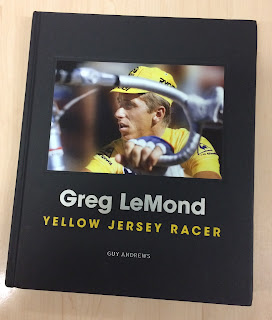 So says Greg LeMond in the Foreword of a great new book, Greg Lemond: Yellow Jersey Racer, by Rouleur magazine's editorial director Guy Andrews (2016, VeloPress). This large, beautifully bound volume is over 300 pages full of stories, memories, and interviews with the American icon's friends and rivals, and page after page of stunning photographs - many of which have never been published before.

The book covers the full arc of LeMond's stellar career, year by year, from his beginnings as an exceptionally talented young American amateur racer and the move to the professional ranks in Europe, to his establishment as one of the sport's greats - becoming not only the first American to win the Tour de France (as well as the first English-speaking champion), but also one of only a handful of three-time winners of cycling's greatest race, and a two-time World Champion.

Andrews's writing is engaging, and the interviews with LeMond's former teammates and competitors provide extra perspective not only on LeMond's career, but also on the changing world of bicycle racing throughout his era. It's important to remember that Greg LeMond was a major player in the changes that occurred during his time - from the growth of interest in the sport in the U.S., to salaries for the racers themselves, and also the embrace of emerging technology for the bikes. One change that LeMond notably did not embrace was the introduction of drugs like EPO to the peloton, which is something that may have helped to drive him out of racing - and yes, that aspect gets mentioned as well.

I enjoyed reading about the nascent American racing scene of the late '70s and early '80s - before cycling really took off in the U.S. Those recollections by fellow Americans Jeff Bradley and Ron Kiefel brought back memories for me, as I well remember what it was like to be a cycling-obsessed teenager at a time when any information about the predominantly European sport was hard to come by - and how hungry we were for any articles or stories we could find about the sport, even if it meant paging through whatever imported magazines we could scavenge to study the photos, and try (usually unsuccessfully) to make sense out of the text which was typically written in French or Italian. Other interviews with people such as Phil Anderson, Sean Kelly, Stephen Roche, Andy Hampsten, and even Shelley Verses (the first female soigneur in pro cycling), cover LeMond's rise as a professional, and round out a portrait of the racer many Europeans knew as "the American," but whose name in French essentially translates to "the world."

Over the course of his career, LeMond rode a lot of bikes - from a classic steel Cinelli in the '70s, through trend-setting aerodynamic time trial bikes in the '80s, to modern full-carbon machines at the end of his career in the '90s. Unlike many racers, he was not content to simply ride what his sponsors gave him, but often insisted on specific equipment, even if if meant getting something specially made and painted in the sponsor's colors or graphics. A sampling of some of his favorite bikes is included in the book as well. 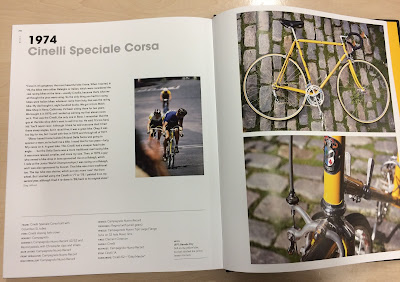 Did I mention great photographs? Here's a sampling:


Greg LeMond: Yellow Jersey Racer retails for $45 and is available now. It's a gorgeous book, with good stories and great photography. I recommend it for any bicycle racing fan - whether for yourself, or for a gift. Cheers!
Posted by Brooks at 2:46 PM