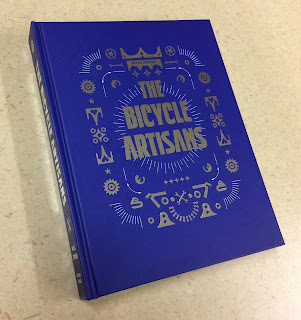 That is the question pondered in the introduction to The Bicycle Artisans, by Will Jones (Gingko Press, 2014). But of course, the answer is absolutely not, as evidenced by the dozens of bicycle craftsmen whose work is showcased in this visually dynamic volume. Eighty eight craftsmen and companies are highlighted in the book's 288 pages, with biographical background info on each maker, and page after page of photographs of their workshops and their products.

With the growth of bicycle industry shows that emphasize hand-made craftsmanship, like the North American Handmade Bicycle Show (NAHBS), Bespoked Bristol in the U.K., and other smaller but similar showcases happening around the globe, The Bicycle Artisans is almost like a handmade bicycle show in book form.

I have actually perused more than a few books showcasing custom bicycles and the craftsmen who build them, loaded with wonderful photography of lust-worthy bikes, and picture after picture of artisans wielding files and torches. As far as that goes, The Bicycle Artisans won't disappoint -- it's all in there. But one thing that sets Jones's volume apart from others I've read is the breadth and variety contained within. Whether someone's fancy is cutting-edge road racing bikes, mountain bikes, touring and randonneuring bikes with cunningly integrated racks and lighting, utility bikes for commuting or hauling, tandems, folders, or even bikes for children - they are all represented. Same goes for bike building materials. There is lots of steel, whether lugged, brazed, or welded. But there are numerous examples of aluminum, titanium, carbon fiber, and even wood. Unique component and accessory makers are also contained within the book's pages.

I don't know what criteria was used to select the builders who are represented in the book, but there is an interesting variety. I was almost shocked not to find American master Richard Sachs highlighted, as it seems every other book I've found on custom bicycles features Sachs's work - but my point is that it's almost refreshing to get a view of other less well-known or up-and-coming builders - some of whom are equally talented, but perhaps not as widely recognized. Of course, there are plenty of names that many Retrogrouch readers will recognize, like Bruce Gordon, Mark Nobilette, or rising stars like Chris Bishop and Johnny Coast - but the book also introduces us to many others, hailing from various countries and continents, who are worth a closer look. 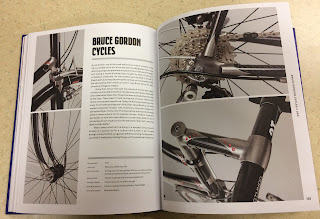 I was really pleased to see the inclusion of Chris Kvale, who like Gordon, has been building bicycles since the mid-1970s, but probably doesn't have the name recognition he deserves. Kvale's work is traditional and not particularly flashy - but absolutely second-to-none.


The Bicycle Artisans, which retails for $39.95, is a celebration of hand-made bicycles and the passion that goes into them. It is not only an enjoyable photo gallery of craftsmanship, but possibly a shopping guide for someone contemplating a custom bike purchase. Not that there was any doubt, but the book is further testament to the fact that the bicycle is alive and well.
Posted by Brooks at 2:43 PM