Over the years, I've taken time to write about some of the products I've bought and used for cycling. Typically with these product reviews, I've been writing about things I've bought and paid for myself - companies don't typically send me free gear to try - so just like the readers out there, I want to make sure things work well and hold up well. I thought it might be worthwhile to take a look back at some of the products I've reviewed here to see how they've held up or if my opinions have changed any. 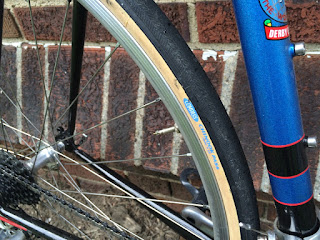 This was a pretty recent review (just 2 months ago), but I've been putting a lot of miles on my bike with the Compass Chinook Pass 28 mm tires. The tires originally distinguished themselves by mounting up nice and straight on the rims, having a classic design that looks as good on a vintage bike as on a modern one, and having a nice supple casing that makes them feel springy and fast. I can easily say that the ride and handling of these tires continues to impress. As far as all the good things I observed about the tires, nothing has changed my opinion. So far (knock on wood) I have not had any flats with the tires, and a careful inspection shows that the tread seems to be holding up well. The tread is wearing a little faster on the back than on the front, which is completely normal, but I'm not seeing anything such as cuts or any other tread or sidewall damage.

One other thing that has not changed is the width of the tires. In my original review, I noted that the actual measurement of the tires as installed on my Mavic Open Pro rims came in at just over 26 mm, as opposed to the 28 mm listed on the sidewall. A couple of commenters suggested that the tires might increase in width over time, but so far that hasn't been the case -- or rather, any increase has been small enough to be relatively inconsequential. As I recall, my original measurement using a pair of digital calipers was about 26.2 mm. Right now, after about three months of use, I'm coming up with a measurement of about 26.5 mm -- still quite a ways off from 28. I'll continue to watch and monitor that - but for the time being, I'm still going to have to stick with my original assessment that if a person is after the largest tires that will fit, and they are trying to decide between two sizes, it probably wouldn't hurt to go with the larger one.

I first got the Rivendell leather gloves almost a year ago, drawn to the fact that they have no padding in the palms. Also, I have a retrogrouchy weakness for classic leather and crocheted cotton cycling gloves. The palms on these are a fine goatskin leather, though an imitation leather version is also available for the same $15 price. My original assessment on the gloves was that they were a good value and seemed to be pretty well-made for the price. I was hopeful that the lack of padding in the palms would relieve some of the discomfort I sometimes find with so-called "anatomic" padded gloves. 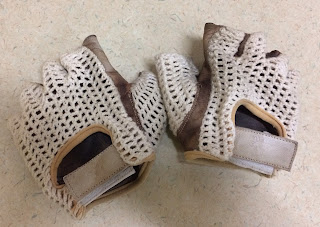 After nearly a year, these gloves have seen a lot of use, and I'm pleased to say that they are holding up quite well. Also, the lack of padding in the palms has never presented itself as a problem, even on longer rides. On the contrary, the goatskin leather provides a nice grip on the bars and a pretty natural feel. Keep in mind that most of my bikes have unpadded bar tape as well, so there is really no padding under my hands whatsoever, and I've never missed it.

The gloves have even gone through the wash a couple of times with no real detriment. I hang them to dry - and when I'd first put them on after washing, the leather would be pretty stiff, but after only a few minutes of wearing they'd soften right up and feel "normal" again. 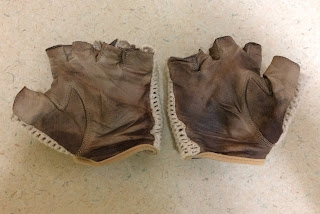 One thing I mentioned in my original review was fit. I found that the fit around my first three fingers (index, middle, ring) was good -- close, but not too tight -- but that the fit around the smallest finger and the thumb was really loose. I still find that odd. I mean, do other people tend to have really fat pinkies and thumbs? I did wonder if that looseness around the thumb would bother me, but in practice I often forget about it. I had thought that if it really annoyed me I might consider taking some cotton twine and do a bit of creative stitching to snug up the fit around the thumb, but it's never bothered me enough to go through the trouble.

A final observation on the gloves: In the Rivendell website description of the gloves, Grant Petersen writes "If they last a year, that's great. They're cheap, they protect your hands, soak up sweat, and are not a precious multi-year investment." Well, it that's the standard, then these have exceeded expectations. I don't know if I'll get another year out of them (though it's possible -- but I've also been known to lose gloves long before they've worn out) but I've definitely gotten my $15 worth, and when the time comes, I'll buy them again. 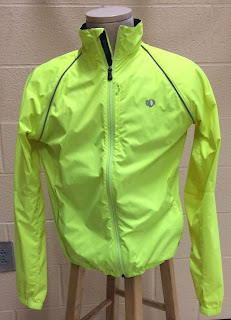 This was actually a product I reviewed a few years ago for a local bike shop's blog, before I started The Retrogrouch. At the time, I said that the convertible jacket was a really versatile clothing item, especially for fall and spring weather. For commuting, I often find a huge difference in temperatures between my morning and afternoon rides - and the convertible jacket was one item that could easily make the transition. Essentially, it is a wind shell type of jacket that can quickly and easily be converted into a vest. When the mornings are cold, I can put the jacket on over a long-sleeved jersey and ride down into the 30s comfortably. A base layer under the jersey extends that even more. In the afternoon, when temperatures may rise up into the upper 40 or low 50s, the sleeves come off and can be stowed in a pocket easily. Although it isn't meant to substitute for dedicated rain wear, the barrier fabric does help repel water in a light rain. A heavy soaking will penetrate it, however.

I've used this jacket for about three years now, and used it a lot -- any time temperatures have been from just below freezing up through the 40s. After all that time, one thing I'm noticing now is that the elastic at the cuffs is starting to give out. This very morning, in fact, I found that the resulting gap at the cuffs was letting a bit of cold air go up my sleeves. It's disappointing to see happening, but I guess I shouldn't be surprised. I might be able to use it a little longer, but it's probably time to start looking at replacements. The design and styling of the jacket has changed somewhat since I got mine, but if they kept the functional good points, I'll consider getting another one when the time comes. By the way, there is a non-convertible version of the jacket - but with the extra functionality of being able to convert it from jacket to vest, I can't imagine why someone would get the regular version.
Posted by Brooks at 12:24 PM