I'm in a rare mood when I don't feel like complaining about something, but today, instead of retro-grouching about new bike technology, I thought I'd share something from the past that I think is pretty awesome. A 1973 Mercian Superlight. It is one of my prized vintage bikes.

I picked this up a couple of years ago as 37-year-old new-old-stock (NOS) frame. That's right. It was 37 years old and had never been built up. It is now a 40-year-old bike that is virtually new. I rounded up parts that were either new, or very close to new, and built the bike up like it might have been done in 1973.

The frame was on eBay for a long time, and for some reason did not seem to be attracting a buyer. It was priced a bit on the high side, at around $900. I watched it for weeks debating back and forth whether it was worth the price. Eventually, it was gone -- I thought it had sold, and then was kicking myself for not getting it. A couple of weeks later, it was back again, still the same price, but I decided not to let it go again. The more I thought about it, $900 didn't seem to be that bad of a price. Yes, it was 37 years old, but it was also essentially a new frame. New Mercian frames start at around $1200, and this was one of the top-of-the-line models with hand-cut lugs, and it was a model that had been discontinued for years. Considering the price of a new frame, and given the rarity, I figured I could do a lot worse.

For the build, I decided to go with the full Campagnolo Nuovo Record group because that would have been the most desirable kit for a high end racer of the day. I already had many of the necessary parts, and they were even the right age. It should be noted that lot of Campagnolo parts have date markings on them. Those parts without specific dates can often be dated by other markings and small construction details. The few things left that I needed were not too difficult to find. All the parts I collected are either dated or identifiable as having been made between 1968 and 1972. I don't think it would be uncommon to find that some of the parts on a bike would be dated a couple of years before the frame was built, as someone might use parts they had available.

The Superlight was, as I mentioned, one of the top models from Mercian. The main feature of the frame was its hand-cut lugwork that was both minimalist and fancy at the same time. The lugs are extensively cut and filed away to almost the bare minimum necessary to support the joints, and yet they have cool hooks and points that make them look really special. Another cool detail is the way the super thin seat-stays are attached at the back of the seat lug. Mercian was one of the pioneers in this style, which they call "shot-in stays" and which came to be known in the bicycle industry generally as "fastback" stays.

In addition to the Campagnolo Nuovo Record components, I also found bars and a stem made by 3ttt of Italy. I considered using Cinelli parts, which are the classic choice, but the 3ttt parts are equally nice, as well as a bit more interesting-looking, and they were also a popular choice in the early 70s. The bars were NOS, and the stem was lightly used. A friend at the local bike shop was able to bring back the original lustre of the aluminum stem, and I was able to find reproduction stickers to restore it to that like-new look. For the saddle, I found an eBay seller in the UK with a Brooks Professional in virtually unused condition that just happened to have a 1972 date code. Perfect.

For the wheels, I used a nice set of large-flange Campagnolo NR hubs. The bearing cones inside indicated they were made in 1968, making them the oldest parts on the bike. I used NOS Super Champion Arc-en-ciel tubular rims which were a good, lightweight choice for the time. Tires are Clement Criterium tubulars. The tire labels indicate they might be a bit newer than 1973, though.

In obsessing about creating a "period-correct" bike, I discovered that the Nuovo Record brake levers I had first installed on the bike (the ones that are pictured above) were not quite right. When I put these on, I was unaware there was any difference in the brake levers. I later realized that the first versions, from about 1968 until around '73 or so, the levers had a slightly longer reach, slightly more pronounced curves, and the cable-feeding hole on the underside of the lever was round while later ones were U-shaped. I was trying to decide if it was worth searching for a pair of the earlier levers, and then by chance, I was digging around in my spare parts box, and found that I already had a pair of the "correct" levers! I hadn't used them because they had some scuffs on them, whereas the ones I had first selected were like new. With a little effort, though, I was able to buff the older-style levers to look just as good. 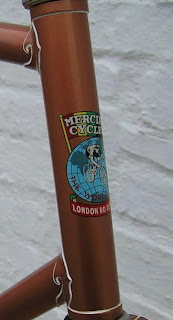 I discovered something else, a very small detail, unique about this particular frame when I was looking closely at the Mercian globe crest on the head-tube. The banner beneath the globe states "London Rd. Derby." Earlier Mercians had a different crest altogether, and most of the globe crest decals one sees read "Derby England," not "London Rd." According to the Mercian company history, they moved out of the London Rd. shop in 1971. I can only guess they had a short run of these particular decals, were still using some of them in '73, then changed to the "Derby England" version that has been used ever since. Searching through the Mercian photo group on Flickr, I could only find one other bike (from the late 60s) with the exact same head-tube logo. I've found a few bikes that were from the same era as this one, or even older, but were apparently re-painted, and the current "Derby England" decals were used. It's just a minor little detail, but it's still something I found noteworthy.

I have a bit of a collection of Mercians, both old and new. This one is the oldest. My collecting goal is to have one of each model. I think the only models I don't have are a ladies/mixte frame, or a tandem. Why Mercians, in particular? I'm not totally sure, but I remember when I was in my teens and first getting into good bikes, one of the first people I got to know who shared that enthusiasm was a guy, a good bit older than I was, who had a really nice older Mercian that he'd bought new in the 70s. It was all Campagnolo Nuovo Record parts, and had an amazing barber-pole paint job (something Mercian is known for). I just couldn't stop looking at that bike, admiring it down to the little details. I think that bike must have really influenced my opinion as to what a really nice bike was, because today I have about seven of them.