In my recent post about Campagnolo Record hubs, which were made for over 25 years, and which many believe were among the best hubs ever made, I mentioned near the end of the article that they were replaced in the mid-80s by the C-Record (or Corsa Record) group. The C-Record hubs, like their predecessors, were available in road and track versions, and both of those were available with small or large flanges. The large-flange C-Record hubs were absolutely beautiful, whether for road or track -- but also, urban legend has it, possibly fragile. They have a reputation for breaking apart, but it isn't really clear to me how much stock to put into the claims. More on that in a moment. 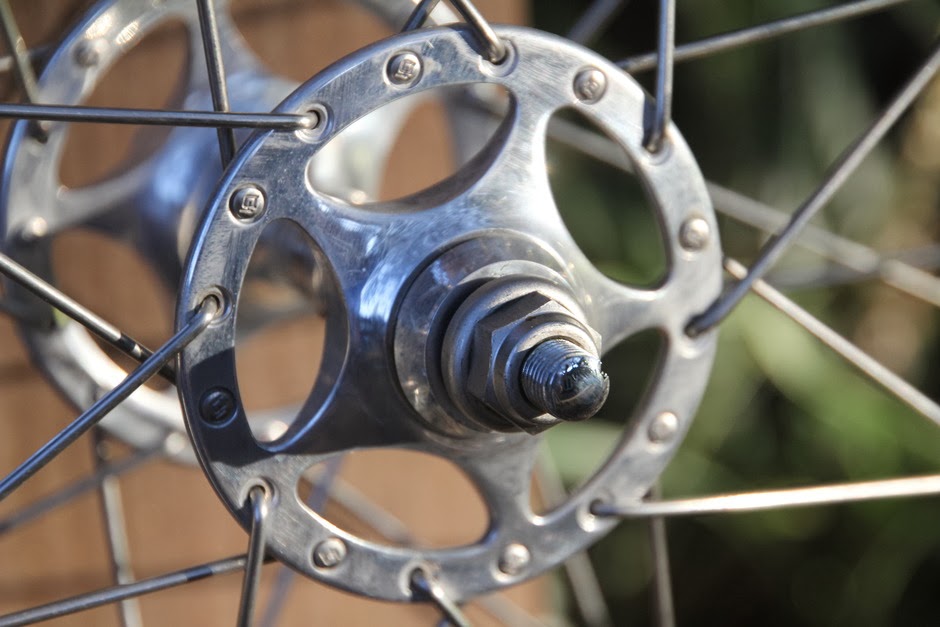 The large-flange C-Record hubs can command some pretty insane prices on eBay nowadays. Part of the reason might be their relative scarcity (at least as compared to the previous generation). The large-flange road hubs were the first to disappear, making them probably the most rare. Then the road hubs were completely redesigned for cassettes and no longer shared much of anything with the track version. The large-flange track hubs were the next to go away, but the small-flange version is still made today, looking not much different from the way it looked in 1986 (they are not exactly the same, however).

Their beauty was another reason they are so desirable. The finish on these was mirror-like. And the design of the hubs in general, and the large-flange version especially, was incredible -- the dust caps were extended and sculpted to blend into the flanges with a graceful, nearly unbroken curve. The large lightening holes give the impression of a 5-pointed star, somewhat reminiscent of a sheriff's star, hence the nickname often given to them. So much aluminum was cut away as to make the hubs look almost delicate.

The hubs may have been a little too delicate, however. By the late 90s, stories of broken hubs started circulating the internet. One story, in particular, spread through the bicycle discussion groups and gained some traction, probably due in large part to a less-than-confidence-inspiring response from Campagnolo. It was given some real credence when it was reported on the late Sheldon Brown's website (see HERE).

Although it is unclear exactly why the particular hub in question broke apart so dramatically -- the owner claimed he was "just riding along," while some insist it must have been involved in an accident -- there is really no way to know for certain. Campagnolo reportedly replaced the hub, but admonished the owner for using a "track" hub on the road. Afterwards, they started including a warning with the hubs stating clearly that using track hubs on the road constituted "abuse" and would void the warranty. That response, probably more than anything, cemented the idea that the hubs were too fragile to be trusted. But it was also pretty ridiculous -- considering that the shells of the hubs were basically identical to the road version that had once been available (only the axle and the threading on the rear hub were different). So what was it that made the hubs unsuitable for the road, unless the road version was also unsuitable? Is that why it was discontinued so quickly? If Campy had handled the situation better, we probably wouldn't even be asking these questions.

So, are the hubs a ticking time bomb? Who knows. The incident above was widely publicized, and one can find (if they search long enough) other stories of broken hubs. Then again, any hub can break -- even the venerable Record hubs of the earlier generation. Anyone who has these hubs and is too afraid to use them, feel free to send them to The Retrogrouch for proper "disposal."

Siblings and Imitators:
Around the time that the C-Record "sheriff star" hubs were available, there were also a couple of other offerings from Campagnolo that shared a family resemblance -- some of which may actually have been even rarer. The mid-to-lower-level Victory group of the mid 80s had a large-flange hub that looked similar, but with a 7-pointed star, a less-luscious finish, and without the sculpted dustcaps. I've seen unscrupulous (or perhaps just ignorant) sellers on eBay try to sell these as something they are not -- like "special prototype" C-Record hubs. They are nice hubs, but they are generally not as desirable of an item, so buyers beware. The same basic hubs, but with different levels of finish quality, were also sold as part of Campagnolo's short-lived mountain bike groups, Euclid and Centaur (Centaur was originally a mountain bike group, before the name was reapplied for the road). The Euclid ones were the top-of-the-line as far as the mountain bike parts go, and had probably the most attention to detail and best finish of these sibling hubs.

Imitation is the sincerest form of flattery, and a few years ago, some imitation sheriff star hubs hit the market. Electra bikes, probably best known for their beach-cruisers, started offering a series of European-styled bikes called the Ticino line. To go along with those bikes, they had a full range of accessories, like hammered-finish fenders, and some nice randonneur-style racks. They also made some hubs that borrowed a lot from the classic C-Record design. They were a pretty nice imitation, with a smooth, softly polished finish, capturing a lot of the details of the Campy originals, minus the sculpted dust caps, and with sealed cartridge bearings instead of cups and cones. There was a road/cassette version, and a single-speed version that had flip-flop fixed/free threading for a fixed cog on one side, and a single-speed freewheel on the other. They also seemed to have just a bit more metal at the flanges, which might make them a little more durable, or at least more confidence-inspiring than the originals -- assuming the C-Record reputation for fragility is true. Electra offered the hubs for a few years, but I looked at their most recent catalog and it appears they have been dropped. Too bad.

All-City Cycles recently released another imitation, called the "New Sheriff," though apart from the 5-pointed star shape of the flanges, they are not nearly as faithful of a recreation as the Ticinos were. The cutouts are not as graceful, the center shaft is huge, and they use oversized 15 mm axles. I believe their target market is the "urban fixie" crowd.

To wrap it up, the Campagnolo C-Record hubs -- especially the large-flange versions -- are pretty impressive pieces. Like their predecessors, they have those legendary smooth, precise bearings, but in a more sculptural, aerodynamic package. Although they were first introduced about 28 years ago, they still look great today.
Posted by Brooks at 9:28 AM