The Death of Quick Release

Any fools still using quick release hubs are hopeless Retrogrouches. That's right. Quick release hubs, which have been standard issue on quality bicycles since the 1930s (thank you, Tullio Campagnolo), are dead. 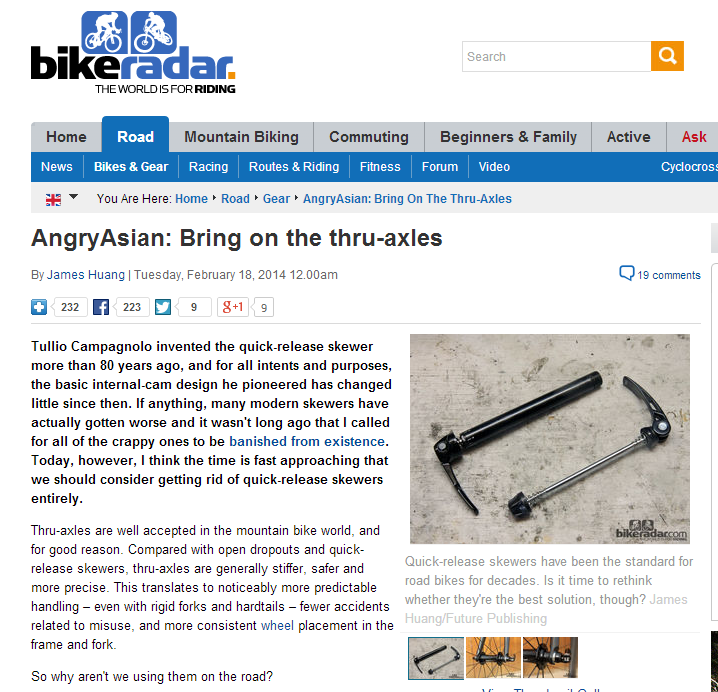 On Bikeradar.com Tuesday, AngryAsian declared it's time to throw away our quick releases in favor of thru-axles (Bring On The Thru-Axles). Why? He says in the opening paragraph because they've been around over 80 years, and there are lots of "crappy ones" out there.

It should be noted that a lot of those "crappy" quick release skewers tend to come on really expensive wheels. And the reason so many "crappy" QR skewers exist is because weight weenies are obsessed with shaving off every possible gram of weight. But now these weight-obsessed gram shaving junkies are going to switch to heavier thru-axles? Well, yes. Because they're new.

I wonder, after the weight obsessed junkies get done performing their magic on thru-axles, won't they be rendered pretty "crappy," too?

There must be another reason why it's time to ditch quick release levers. Well, on downhill mountain bikes, especially those with disc brakes, thru-axles may provide a better, more secure wheel attachment. OK, score one for thru-axles. But what about for the rest of us? What about road riders with rim brakes? For MOST riding applications, traditional quick release skewers provide all the strength and security anyone needs. In fact, they provide more security than most people need.

What is the argument against thru-axles? AngryAsian says tradition is a big issue. "Without question, tradition is a big deterrent. We've all been using quick release skewers for so long that it's hard to imagine a road bike being built without them." I think that's a slight misinterpretation of the history and tradition. People don't use quick release hubs because they're tradition. They're tradition because they work. They're simple, and incredibly effective. They've been rendered slightly less effective by weight weenies (those open-cam designs might be lighter, but they really are junk), and by lawyers ("safety-tabs" or "lawyer-lips," anyone?) but the quick release lever is truly a great bicycle-related invention -- one that is really difficult to improve upon.

Even in the arguments FOR thru-axles, the column has to cite the negatives:
Thru-axles are slower to operate -- but new designs are almost as fast as quick releases with "lawyer tabs."
Thru-axles are heavier -- but not by much, anymore.

AngryAsian also cites safety. He states, thru-axles are "simply harder to install incorrectly," and "less likely to catastrophically fall out even when they are." It's true that people sometimes do not know how to correctly operate a quick release lever. Then again, I've also seen lots of bikes out there with axle nuts where the nuts were loose, too. And forks installed backwards. Brake cables unconnected. It goes on and on. Should we completely "dummy-proof" everything about bicycles? Is that even possible?

But let's just say that the industry is listening. Thru-axles are "in" and traditional quick releases are "out." That's a pretty sobering thought for me, but I can't help but think it would be typical given the current state of the industry. Consider that changing standards would mean total incompatibility with our current bikes. New wheels. New frames (or at least new forks). We'd have to completely "upgrade" our bikes, so you can almost hear the marketing execs salivating. But don't expect that the industry would settle for just one new standard. Competing companies would all release their own new "standards," none of which will be interchangeable with any others. They're doing it with bottom brackets, and headsets, why not hubs? If this happened, would companies continue to make parts compatible with "old" technology? Probably -- but one should fully expect that the industry would relegate it to "entry-level" bikes and components (so much for the safety arguments -- it's at that level where we see the most installation issues). Am I being too harsh? Pessimistic? Cynical? Industry people at Eurobike last year were talking about relegating 26-in. wheels to the entry-level market (see Still More Wheel Madness), so what chance does the "lowly" quick release skewer have?

The only thing wrong with quick release hub technology is that it's old. It's light, simple, inexpensive, and it works. There is tremendous compatibility over decades worth of bicycles and components. There may be some (completely solvable) issues with disc brakes, but then I'm not really sold on those, either. For most riders, most bikes, and especially road bikes, I see no reason to abandon them. Tullio Campagnolo, wherever you are, thank you.
Posted by Brooks at 11:40 AM