It's tough being a weight weenie. Expensive, too. That's why I gave it up a long time ago.

Being a weight weenie throws all perspective and good sense askew, like wearing those "Drunk Goggles" they use to teach people about drunk driving.

I once stopped to see if I could help a fellow cyclist who was standing alongside the road with a mechanical problem. He had a full-carbon wünderbike that must have weighed no more than 15 lbs. He had been riding with one of those aluminum cassettes that are supposed to shave a few more grams off the bike. I don't know if he'd had a bad shift or what, but he'd rounded off a couple of the cogs. Wasn't anything to do but wait for a ride to come pick him up, I guess. 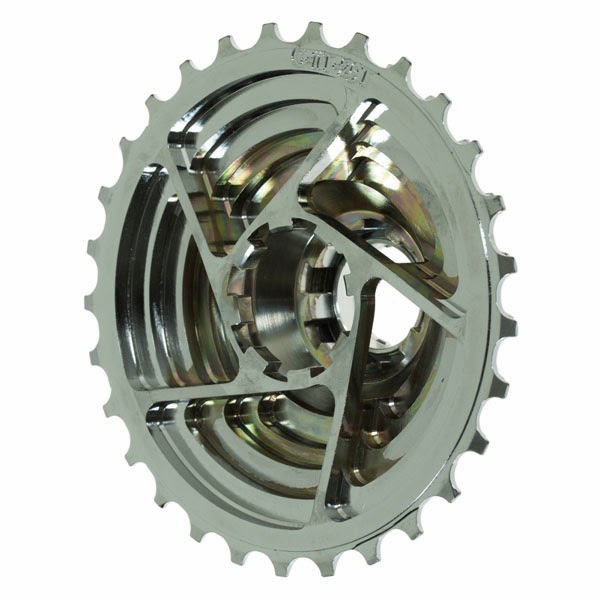 I've recently been reading a bit more about these things. BikeRumor did a test of the latest 11-sp. version of what I assume was the same cassette (or at least pretty similar). Looking at the pictures, I have to admit that it's a pretty impressive piece of CNC machine work -- literally carved in one piece from a solid billet of aluminum. Doesn't mean it's a good idea, though. I enjoyed this quote from the article: "They come with three warnings: One, performance isn't going to be quite as polished as a high end Shimano cluster. Two, it won't be as durable. And three, shift gently, lest you snap a tooth off."

Definitely sounds worth it, doesn't it? Compared to the Dura Ace cluster, that beautifully machined piece of kit saves about 40 grams. Compared to the Ultegra set, it costs an extra $100 or more and saves about 80 grams. That's 0.17 lb -- about the same as one big gulp of water. Anyone who says they can feel that difference in weight while riding is delusional.

Why do people fall for this? Giving up durability and reliability, spending more money (and spending it more often since the parts don't last as long), in the name of shaving grams? The way I figure it, there is "light," and there's "stupid light." Anything that compromises reliability or safety is "stupid light." Cogs that don't shift as well and can be sheared off easily are "stupid light." Carbon fiber handlebars and stems, forks and steerers that can lead to complete loss of control if they snap? In my mind, those things are really "stupid light."

At the top levels of racing, where equipment costs are covered by the sponsors, and things get replaced on a regular basis, and where races can be won by tenths or even hundredths of a second, people may be able to argue that even a small amount in weight can make a difference between winning and losing. Then again, at the top levels of the sport, the UCI has weight limits in place that negate further gram shaving. Some pro-level bikes have to have weight added to them to meet the weight restrictions! Beyond that, in mass-start races, good racing strategy will make a bigger difference than a few grams. In a time trial, weight can be a factor, but aerodynamics, good position, and the right mindset are probably all bigger factors in winning or losing.

In lower level amateur racing, where most people have to buy their own gear, it doesn't make sense financially, and probably doesn't make much of a difference in race results, either. Some might think "I dropped 60 grams off my bike and I had my best finish, ever!" and they'll be convinced it was the 60 grams that did it. If someone said "I wore my lucky socks and had my best finish, ever!" they might be just as convinced, but the rest of us would immediately dismiss that as superstition. But in reality, the lucky socks are only slightly more superstitious than the 60 grams. There are too many other variables that could lead to the improved result to form a provable cause-effect conclusion.

For the far greater number of riders out there who don't race -- even those who like to ride fast -- dropping grams at the expense of reliability makes no sense at all. It might garner extra "oohs and ahhs" from people who like to lift bikes up and remark on their relative weightlessness -- but that's not how we ride a bike (not even up hill!).

Weight does make a difference in speed. But you really have to be talking about differences of POUNDS, not grams. The lighter bike may "feel" faster, but the difference is often more perception than reality. As for myself, I'm far more impressed by a machine that remains simple, fits well, rides comfortably, works reliably, and lasts longer than fashion.