Bring Back the XO-1?

I recently heard from a reader asking if there are any builders out there who make (or would make) a bike based on the sought-after Bridgestone XO-1. The question got me thinking. 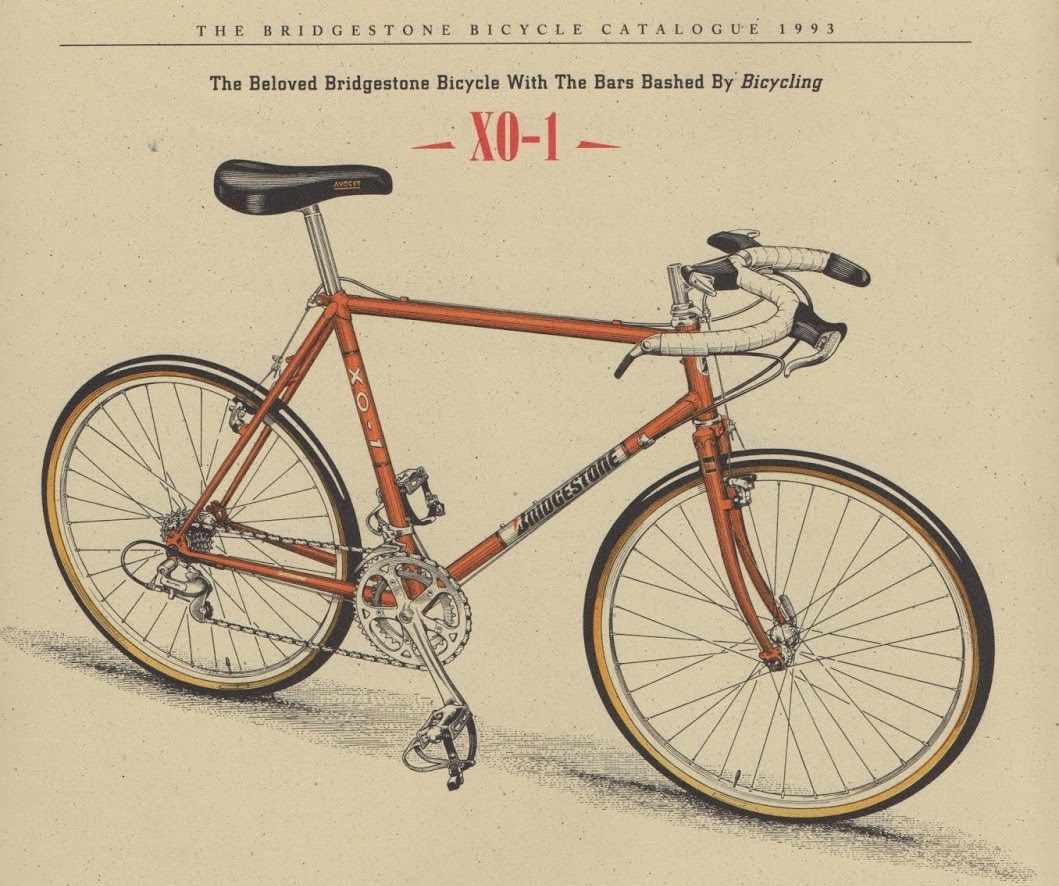 The Bridgestone XO-1 was the creation of Grant Petersen, the founder of Rivendell Bicycles, and was a bike that defied categorization in its brief time. It was a bike with road geometry, but equipped with 26-in. (559 mm) wheels, making it capable of going easily from pavement to trail -- like a hybrid of sorts, even though that particular label was avoided. Perhaps because people didn't know how to pigeon-hole it, it was only made for two years -- 1992-1993. I wrote a retrospective of the bike last year.

Since the discontinuation of the model and the pull-out of Bridgestone from the American market, the XO-1 has attained something like a cult status.

So back to the question. Does anyone make a bike based on the XO-1? Or would they? Maybe I should ask, should they?

The most obvious answer to the first part is Rivendell, whose Atlantis model is somewhat similar in its intent to the XO-1. Frame sizes from 47 through 56 cm are designed around 26-in/559 mm wheels. Larger frames are designed for 700c/622 mm, with room for large volume tires. Equip an Atlantis with mustache bars and get a bike that is a spiritual descendant of the cult classic. The fact that the Atlantis (as well as some other Rivendell models) approaches wheel size as a function of frame size actually represents an improvement in my mind over the XO-1. The original was only available in frame sizes up to 59 cm. At that size and beyond, the proportion of the frame with the wheels starts getting awkward and the frame starts to lose triangulation. I've written articles about how wheel size should ideally be a function of frame size and proper fit, rather than a "fashion" or marketing decision.

As to the second part, there's no doubt that any custom frame builder today could build a modern version of the XO-1. The question is would they? Giving the question more consideration, I figure some builders might be willing -- but I have a feeling that many builders today might look at the bike as something they can improve upon, not copy. They might perhaps look at the intended "mission" of the bike to be built, and go after their own idea of how to get there. And chances are, many would recommend 650b wheels.

Here's something to consider. The XO-1 was designed around 26-in/559 mm wheels to make it rough-stuff capable, and in 1992, that's what was available to fit the bill. Since that time, several things have happened: One, 650b/584 mm rims and tires (virtually obsolete 20 years ago) have seen a resurgence, and there are many excellent choices now for tire widths and tread types. Two, more choices in large volume tires in a variety of tread patterns (including gravel tires and MTB knobbies) have become available for 622 mm rims (700c/29er). Given the range of choices, would it still make sense to build a modern XO-1 around 26-in. wheels? For smaller frames, yes, but I have a feeling that if 650b wheels and tires had been as available in 1992 as they are today, the XO-1 would have used them. (Remember that Grant Petersen himself was one of those who helped renew interest in that wheel size back around 2005, offering a 650b Rivendell model called the Saluki.)

Another thing that has happened since the early 90s is the rediscovery of French-inspired randonneur-style bikes -- many of which are built around those 650b wheels. In many ways, these bikes can fulfill a similar mission to the XO-1 -- perhaps even better. I put the question to framebuilding master Peter Weigle, and here is what he said. "A good rando-style bike built today will do everything the legendary XO-1 would do, and it would be comfortable while doing it, as well as being more versatile -- being able to carry some gear, and have fenders to fend off the rain." I think he's right about that. Jan Heine has an article in the Spring 2014 issue of Bicycle Quarterly about touring "secret passes" with a 650b MAP S&P rando bike (a collaboration between Brent Steelman and Mitch Pryor), and he found that the bike was able to handle washed-out roads and some incredibly rough trails without trouble.

There are a couple of budget-conscious production bikes available today that I think would capture the "go anywhere, do anything" spirit of the XO-1 without exactly being copies or re-makes of the original. One of those would be the Polyvalent from Velo-Orange. It's a low-trail geometry, French-inspired bike that uses 650b wheels. Depending on how one equipped the frame (mustache bars, anyone?) it could easily be considered a modern take on the old Bridgestone classic. Frames sell for $550. Another possibility might be the Soma Grand Randonneur -- co-designed with Michael Kone of Rene Herse/Boulder Bicycles. Frames are about $490. Either of these, with 650b wheels and their low-trail geometry should handle nimbly, and go from road to trail with ease. Isn't that what the XO-1 was all about?

As for the last part of my earlier question -- should the XO-1 be re-made? I really like the original -- it was built well with a sensible, versatile design. It was a great bike for its time -- but it seems to me that it also reflects some of the limitations of its time. I may be a Retrogrouch (proudly) but it's hard for me to see the resurgence of classic tire choices (like 650b) and randonneur bikes as anything but positive developments. In a way, they're even more "retro" than the XO-1, so it's not even inconsistent, in fact. In my exchange with Peter Weigle, he said, "It's hard to overcome the nostalgic, legendary notions of the past." I agree. Perhaps if someone is really intent on an XO-1, and vintage examples are still available, there's no need to copy it. But if we're building a new bike, and we can do it better while staying true to the spirit of the original, then we might be well to be open to the possibilities.