In an interesting (and somewhat ironic) follow up to yesterday's post about more disc brake recalls, I found this story today on BikeRadar about how the UCI is moving closer to approving disc brakes for professional road racing bikes, which means they will be one step closer to becoming ubiquitous on most road bikes, regardless of whether they will be raced or not. 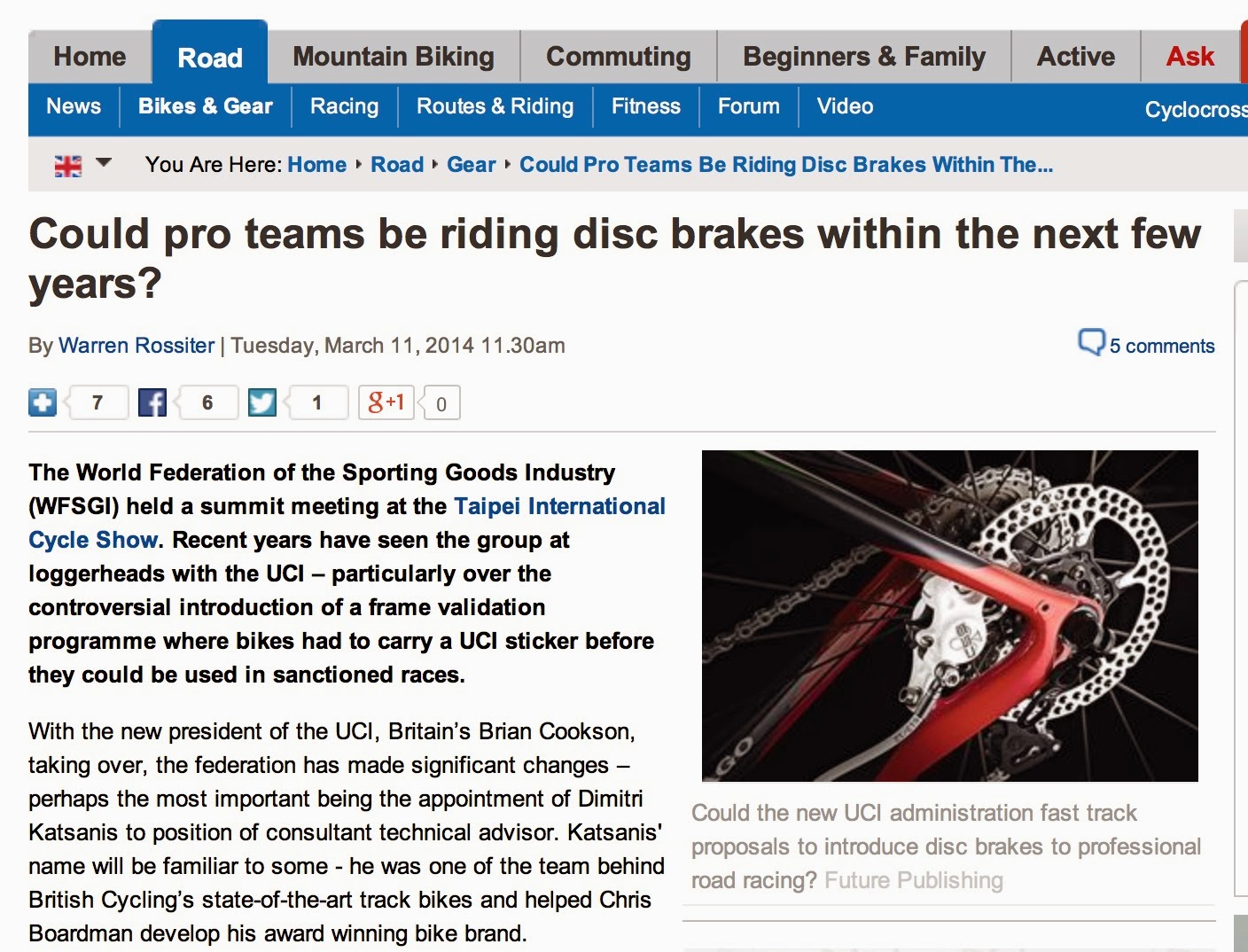 Much to the chagrin of the bicycle industry and weight weenies alike, the UCI has long been somewhat of a wet blanket, with their skepticism of some of the new technology and designs for pro-level racing bikes. Over the years they have set minimum weight standards, opposed bike designs that deviated too much from the traditional racing frame, opposed disc brakes, and blocked the use of lots of other innovations.

But under new leadership, the UCI may be poised to be much friendlier to new designs and technology. According to the BikeRadar article, the UCI has appointed a new consultant technical advisor who has promised "to work closer with the industry and collaborate on safety tests and ratification of new technologies."

One industry insider pointed out how the new leadership will likely be more open to new innovations. "Previously we saw the UCI like a castle. We were knocking and banging on the door constantly but it was never opened. Now they have opened it from the inside: Welcome!"

At the Taipei International Cycle Show, road disc brakes were apparently a big topic, and the industry is getting pretty excited. Said one industry insider, "This is a new era at the UCI -- they are open to it. There is now a disc brake group with the UCI, with the lookout to a possible introduction to road racing within the next few years."

The BikeRadar article ended with the following, very hopeful, quote, "It's the clearest indication we've had yet of a real step towards disc brakes used in the pro peloton and certainly backs up claims on both sides of embracing new technologies for a new era."

Obviously, disc brakes are already making inroads onto road bikes, considering that UCI regulations only pertain to the pros, and don't really have any effect on general consumers, amateur racers, triathletes, or others. But so much of the industry today operates on a "top-down" approach, putting such an emphasis on what the pros are riding, and filtering the racer influence down through bikes that will never be raced. The fact that the pros are still riding on rim brakes acts as a bit of a damper. But my guess is that once all the pros get moved onto disc brakes, then finding any bike with high-quality rim brakes will become more and more difficult. My prediction is that eventually, rim brakes will be found on nothing but cheap, entry-level bikes. And as far as I'm concerned, that is not something to celebrate.

I still am not "sold" on disc brakes. I think there is widespread denial of their drawbacks. I don't believe the hype, and I still see benefits in the simplicity of a good set of classic rim brakes. I guess I wouldn't be a Retrogrouch if I saw it differently.
Posted by Brooks at 7:24 PM