Whatever Happened To Rebecca Twigg?

I don't know if there is any male cyclist of my generation who didn't have a full-out crush on Rebecca Twigg at some point in their life. Twigg was one of the most dominant American bicycle racers of the 80s and early 90s -- male or female. She was fast, super intelligent, and beautiful. How could anyone resist?


Rebecca Twigg held numerous National Championship titles on the track, mostly in pursuit, and on the road for both the individual time trial and road race. She was the silver-medalist in the 1984 Olympic road race, and the bronze-medalist in pursuit at the '92 Olympics. She was also a 6-time World Champion in pursuit. In addition to those titles, Rebecca won the Coors Classic stage race in '83, as well as the first three editions of the Ore-Ida Women's Challenge, from '84 - '86, which was one of the top women's road races in the North America at the time. Her incredible list of palmares puts her into very elite company. And then after 1997, she pretty much disappeared from the public eye. 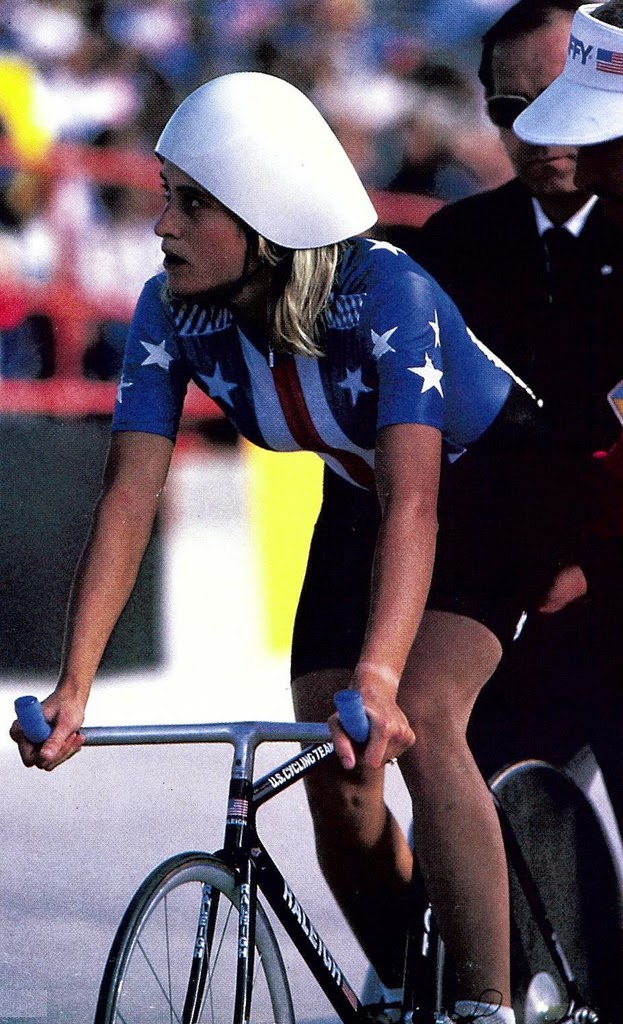 According to a 1996 Sports Illustrated interview, Twigg was born in Hawaii, but was raised in the Seattle area. As a child, she was so precociously intelligent, that at the age of 14, instead of starting high school, she started college at the University of Washington where she got a degree in Biology. Perhaps ironically, her mother apparently wanted to spare the painfully shy teenager the difficulty of trying to fit in at high school. Not surprisingly, Rebecca felt completely cut-off as a young kid in a college environment. But during that time, she turned her attention to bicycle racing, where she applied her talent and passion for perfection. Within a short time, she was shredding the competition in junior girls road and track competitions. She won her first of 16 National Championship titles (in the individual time trial) at the age of 18. National titles in the road race, and her favored event, the pursuit, soon followed, as well as her first World Championship in pursuit that same year.

After only a couple of years or racing, she had attracted the attention of the U.S. National Team coach, Eddie Borysewicz, or "Eddie B" who eventually encouraged her to move to Colorado Springs with an eye towards the '84 Olympics. In the women's road race, she was nipped at the line by Connie Carpenter, another American racing legend, but the 1-2 American finish was a high-point for this country's burgeoning bicycle racing scene.

In 1985, she married another national-team bicycle racer, Mark Whitehead, though that marriage lasted only a couple of years. (Whitehead died in 2011, at the age of 50).

Then at the age of only 26, with an impressive run of National and World titles, Twigg retired from racing and returned to college to get another degree, this time in computer science. She then spent the next couple of years as a computer programmer.

In 1991 she returned to racing when she learned that the pursuit event, which had previously not been offered as a women's Olympic event, was being added for the '92 games in Barcelona. She took the bronze in those games, and went on to win two more World Championships in that event in the next two years.

There was some controversy surrounding Rebecca Twigg about the 1996 Olympic games in Atlanta. According to articles from the time, like this one from the Washington Post, there were tensions between Twigg and then-national team director Chris Carmichael, resulting in Twigg leaving the Olympics before the games concluded. Much of the tension revolved around criticism from Carmichael about her training, but especially had to do with disagreements regarding the so-called "SuperBike" developed specially for the Atlanta games. Developed at great expense, the SuperBike was supposed to be the secret weapon that would give the Americans the competitive advantage they needed to repeat the kind of success they had in '84. The performance of the Americans, despite the technological advantage promised by the new bikes, was disappointing (you can almost hear the collective groan rise up from all retrogrouches). Twigg was discouraged by her performance on the wünderbike in her first round in the pursuit, and refused to use it in her second heat. The bikes were supposed to be the "best on the planet," but Twigg didn't like the fit, and blamed the surrounding disagreements and tensions for breaking her focus.

It wasn't too long after that, in 1997, that she left the sport of bicycle racing for good. It's hard to find out what she's been doing since. I've heard through one of the bicycle forums that she might be doing something in the medical field with her biology degree, though I have no idea how reliable that is. It's just as possible that she's still in the computer field, or perhaps doing something completely different. There's no doubt she was smart enough and driven enough to excel at anything she set her mind to.

In 2002, she was inducted into the U.S. Bicycling Hall of Fame, though according to the USBHF website she did not go to the induction ceremony, and instead her award was accepted for her by a third party. The most recent thing I could find about her was from 2004 when she participated in Greg LeMond's Fantasy Cycling Camp which was held to raise money for Eddie B, whose California home was destroyed by brushfires earlier that year. There wasn't much information given, other than the fact that she was there.

Rebecca's impressive racing credentials, as well as her pretty face, meant that one could see her in numerous advertisements and magazine covers. You can see a couple examples here. I still have a couple old issues of Bicycle Guide on which her picture graces the covers. And searching through the pages, it isn't too hard to find her picture in some of the ads -- though my favorite is probably the Pro-tec ad shown below. A quick Google search would turn up a less modest version that was available as a poster, though I don't seem to have a copy of that one in my possession.

Maybe somebody out there knows where she is or what she's doing -- and maybe pass this along to her. She might like to know that she still has a lot of fans out there. Among American bicycle racers, male or female, Rebecca Twigg remains one of the all-time best.
Posted by Brooks at 7:13 AM