Troubles For The Neighborhood Bike Shop

Running a bike shop would have to be a difficult way to make a living. It's always been a "low margin" business, but in this era of widespread internet shopping it has to be tougher than ever for the little neighborhood bike shop to keep the doors open and the lights on.

Remember when the most worrisome competition a bike shop had to deal with came from Bike Nashbar, or the Performance catalog (or Bikecology, if you're a little older)? I'll bet there are a lot of older bike shop owners who think of those as the good-old-days compared to now.

Instead of a couple of mail order catalogs that offered somewhat lower prices in exchange for somewhat less convenience (like mailing in an order, and waiting a week or two for the package to arrive), there are now so many internet-based suppliers and so many choices, 24-7 ordering convenience with overnight shipping and no sales tax. And of course there are prices that undercut the lowest wholesale price the local shop can get on bikes and components. 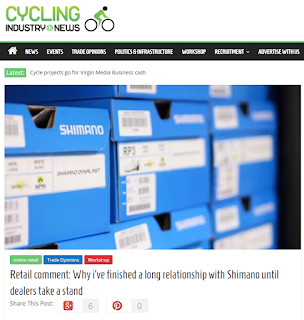 I've always believed in supporting the local bike shop, but I was just reading an article that put their issues into a sharp focus. The article comes from Cycling Industry News. "Retail Comment: Why I've finished a long relationship with Shimano until dealers take a stand."

The commentary is from Drew Johnson, the owner of World Famous City Cycle. He starts his piece with this scenario:

"Today a friend brought in some new Shimano XTR brakes that he apparently bought online for $145 a unit . . . no sales tax, and free freight. My cost is $155 from the only US Shimano distributor."

Johnson went on to cite statistics that Shimano's sales are up 14% while sales through bicycle dealers are down 25% and dropping. What those numbers say is that internet sales are taking a bigger and bigger piece of the pie.

The commentary also touched on the problem of "showrooming" - a practice I wrote about a couple of years ago. Customers come into a shop to try on shoes then buy them online (shoes are probably one of the most commonly "showroomed" products in the bike biz). Sometimes they buy the shoes online before they've even left the bike shop by using their smartphones. Johnson estimated that 90% of the people trying on shoes in his shop end up buying them online. I have no way of knowing if that's an accurate statistic, but whatever the number, that's just flat-out a crummy thing to do. The way I figure it, if a person has no intention of buying the product from the local shop, then don't waste the time of the staff by getting their help and advice. The fact that there is a staff there to help and advise, and a physical space and inventory in which to do so, is a big reason that the price may be higher than the online shop.

It was pretty clear from the article that Johnson feels that Shimano is a major part of the problem, and says they seem unwilling to do anything about it. There are simply no controls on pricing of their products, so big online retailers are able to sell to the customer for a much lower price than what the local bike shop can get wholesale. Compare Shimano to a company like Apple which maintains a strong control on pricing. Whether someone buys their Mac, iPad, or iPhone from Apple, or BestBuy, Target, or an online retailer, the price will never vary by much -- and if one finds a price significantly lower price somewhere, it's almost certainly a sign of something fishy (such as a "counterfeit" item, or maybe a "reconditioned" item). The commentary mentions that SRAM is working on such controls, but so far Shimano is not.

For bargain-hunting consumers, in a time when bike and component prices just keep climbing, it may seem hard to see the problem (what are you saying - you WANT to pay more?), but the way I figure it, none of us is better off if a good local shop is forced out of business unfairly.

Johnson concludes his piece by saying he is going to stop carrying Shimano products (and Pearl Izumi, too, I presume, as they are fully owned by Shimano) and wants to encourage other dealers to do the same thing. Considering the huge role that Shimano plays in the bicycle market, that will be a tough thing to do -- I imagine most little bike shops would be unwilling or unable to follow that lead. 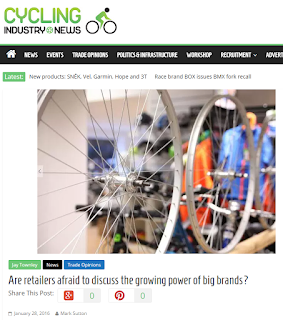 In fact, another article from Cycling Industry News also looked at the tough position bike shops are in. In "Are Retailers Afraid to Discuss the Growing Power of Big Brands?" the writer, Jay Townley, discusses the fears that many retailers have as the bike industry is controlled more and more by only a handful of really huge companies. Trek, Specialized, and Giant for bikes, Shimano, SRAM, and Campagnolo for components. If a dealer feels their agreement with one of these major companies is unfair, they are faced with a "rock and a hard place" kind of decision. When one company controls such a huge portion of the market, taking a tough stand (like dropping all Shimano products, for example) could potentially have a much more negative effect on the little shop than on the big company.

Another thing that could (or should) make bike shops nervous is the recent news that both Trek and Giant are going to start selling their bikes direct to the consumer through internet sales, using the local dealers as little more than a "point of pick-up." How long will it be before these major brands decide they don't need the local dealer at all?

Clearly, the bicycle business is changing. Fewer, but much larger, companies control much more of the market. Competition from online retailers is growing, and their business model and practices are so different from the brick-and-mortar shop that it has to feel like an unfairly stacked deck to the local bike dealer. Any bike shop that's going to survive is going to have to find a very different way of doing business in order to keep from being swept away by the changes. Bike shops have to find a way to keep themselves relevant and necessary to the bike riding public. Service and repairs are an obvious point for survival, but to thrive and not just survive, dealers will have to get creative.

What will the bike shop of the next decade be like? I just don't know - but this is probably a scary time to be a bike shop owner.
Posted by Brooks at 12:07 PM