Bike Safety 101: Disney's I'm No Fool With a Bicycle

In the Bike Safety 101 series, I've looked at a lot of old educational films, many of which were cranked out by low-budget, relatively unknown production companies that specialized in films for schools. But today's bike safety film comes from a giant in family entertainment - Walt Disney.

In I'm No Fool With a Bicycle from 1955 (released in color in 1956) the conscientious pedagogue Jiminy Cricket gives a short history of the bicycle, and explains some of the basics of safe riding. The 8 min. film was part of an "I'm No Fool" safety series that aired on the original Mickey Mouse Club TV show in the 1950s. In fact, the bicycle safety film was the very first in that series, which also included lessons on fire, water, pedestrians, and more.

I'm No Fool With a Bicycle begins like the other films in the I'm No Fool series (in fact, most of the opening animated footage is exactly the same from one film to the next as a cost-cutting method), which is to say, it begins with Jiminy Cricket surrounded by books in a library, singing the very catchy song "I'm No Fool" that should be absolutely familiar to anyone old enough to remember Annette, Tommy, Cubby, and the rest of the original Mouseketeers.

That song was written by Disney songwriter Jimmie Dodd, and sung by Cliff Edwards, who did the voice of Jiminy Cricket from the 1940 film Pinocchio, and up until the late 1960s. By the way - songwriter Dodd also wrote the Jiminy Cricket song "Encyclopedia E-N-C-Y-C-L-O-P-E-D-I-A" which was so catchy that to this day I (and perhaps an entire generation of baby boomers before me) cannot spell the word "encyclopedia" without singing it.

Jiminy then goes on to talk about doing things the right way and the wrong way, and how only fools do things the wrong way. Not until he opens up a book about bicycles does the animated footage become specific to this particular film, otherwise the opening sequence all got recycled in the other safety films in the series.

Jiminy's history lesson fills up the rest of the first half of the film:

Working their way through history, we see other evolutionary steps, like the "Bone Shaker" and the  "High Wheeler" -- and with each one, there is a little animation of what was wrong with it.

Eventually we get to the modern bicycle:

Not in the U.S. though, let's just be clear about that -- and that is the only admission in the entire film that bicycles can actually be more than just toys for kids. From here on out, I'm No Fool With A Bicycle covers the same ground as every other bicycle safety film from the 50s and 60s. Bicycles are for kids. Cars are for adults. So get those ridiculous socialist notions of adults on bicycles out of your head right now.

The next half of the film follows the oft-used "Goofus and Gallant" formula using little chalkboard characters to represent "You" the viewer . . . 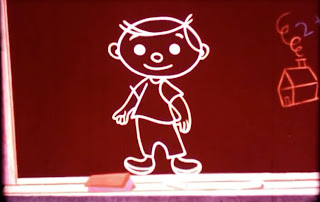 And a "common, ordinary fool": 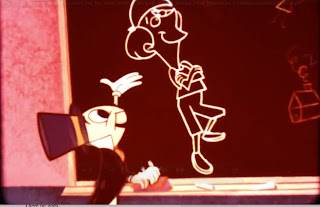 Jiminy then illustrates various rules about riding by praising "You" doing things right, while we get to laugh at the fool doing everything wrong.


All the while, Jiminy sings more bicycle-specific verses of the "I'm No Fool" song.

After the fool is reduced to a pile of chalk dust, Jiminy pins a big "I'm No Fool" medal on "You." 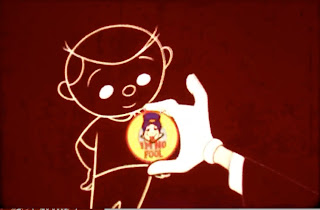 And that's the end of the film, but there's still more to mention.

Apart from it's significance as a bicycle safety film, I'm No Fool With a Bicycle has other points of interest worth discussing. For one thing, it represented a shift in Walt Disney's operations as they made the transition from full-length animation and short films for the big screen to shorts for the new, burgeoning medium of television. Working on tighter schedules for TV meant finding ways to save time as well as cutting costs (hence the use of so much "recycled" animation footage in things like the I'm No Fool series). The animation style also had to become much less detailed - flatter, and simpler, with bolder outlines -- making Jiminy easier for audiences to make out on their smaller, often grainy TV screens.


Another thing to point out is that Walt Disney found a whole new market and another way to make money. After films like I'm No Fool With a Bicycle aired on television's The Mickey Mouse Club, they were then released through the company's new division that specialized in renting out 16mm films to schools and other civic institutions. That division later became the Disney Educational Media Company.

Lastly, this film, along with several others in the series, was re-made and re-released in 1988, combining some of the old parts with newer live-action footage. And of course, the updated (and twice as long) version made sure to push bicycle helmets. I can't seem to find a copy of the updated version, however.

In the meantime, put on your mouse ears and cast yourself back to the '50s and watch I'm No Fool With a Bicycle (courtesy of Hbvideos on YouTube):