How Aero Can You Go?

In the never-ending quest for more incremental gains in speed, Specialized has a new weapon with which performance addicts can max out their credit cards: the Specialized S-Works Venge ViAS aero road bike. The bike-blogosphere is all a-tingle over the $12,500 aerodynamic wünderbike.

"Explosive next-gen aero bike aces wind tunnel and McLaren data modeling tests" cries one blog. "Yes, the Venge ViAS is faster. Much faster." The big claim which keeps getting repeated by every cheerleading blog is that Specialized says that the bike will save a rider 120 seconds over 40 kilometers.

There is a pretty sketchy catch to that claim, though. Read on.

Numerous details combine to lower the bike's drag coefficient -- from a special low-profile stem and handlebars to integrated brakes. Everything's proprietary, too, so there'll be no home-mechanic alterations or "upgrades" down the road. Deep-section aerodynamic wheels round out the package. The bike is the first to be fully developed in Specialized's wind tunnel, which they call the "Win Tunnel" (very cheeky), and the target for its efficiency was the company's own Shiv time-trial bike. The company brags that every tube profile has been scrutinized and "massaged" to make it more aerodynamically efficient. 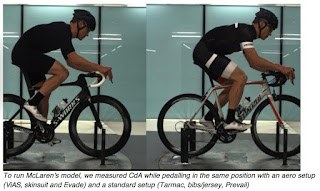 The comparison is not between competing aero road bikes, but rather, between the Venge ViAS and the company's own Tarmac "normal" road bike. To make the claims more blurry, the tests consisted of the rider on the Venge wearing an aero skin suit and aerodynamic helmet, while the rider on the Tarmac was wearing more "standard" bike clothing and helmet. Even Specialized's own calculations say that about half of the time savings could be attributed to those differences.

Here's a telling quote from one of the cheerleading sites:

"Before the launch was held, there was heated debate inside the company about whether inviting journalists to test in this way was a good idea. What if the results weren't impressive? Perhaps this is why we tested aero setup vs standard setup instead of just the bikes themselves with identical clothing and helmet. Nonetheless, even if the bike difference was half, it is still a huge difference."

More than that, though, is the fact that much of the calculating comes from computer modeling and lab testing -- but every company that pushes some new technological breakthrough loves to point to lab tests that "prove" their new product will save X seconds over Y miles. How much of that holds up to "real world" riding or racing, though? Can a bike that's being raced in the middle of a peloton deliver on that promise of time saved? Or will the effect of riding in a pack (even at the front of that pack) negate most of the claims in the heat of competition?

Lastly, unless someone is a top-level professional racer, what does it even matter?

Only a skeptical and cynical retrogrouch would bother to ask those questions, though. The performance-addicts will happily put themselves into debt over those questionable 120 seconds.
Posted by Brooks at 2:47 PM