The first time I saw the name Bernard Hinault in print, it accompanied a photo of a compact Napoleon-like man in a Mondrian-print jersey throwing a punch at some striking workers, his face in a fierce grimace, throwing his whole body into the blow. 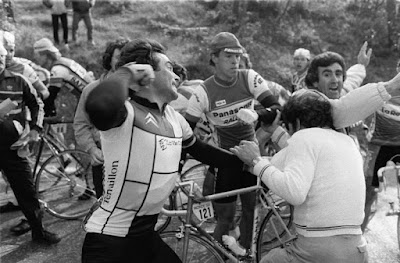 My teenaged self thought, "Who the hell IS this guy? What a badass!"

The famous photo was from the 1984 Paris-Nice, where Hinault was leading a breakaway of about 20 riders when they were stopped by a crowd of striking shipyard workers. Hinault barely managed to skid to a stop before leaping from his bike and plowing into the workers with his fist. Whatever his politics might have been, nobody was going to deny Hinault a chance to win a bicycle race. 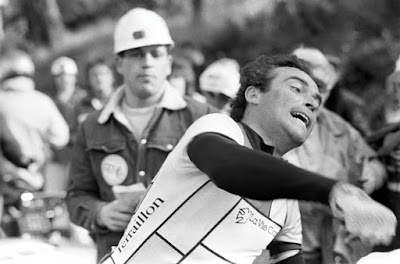 Incidentally, Sean Kelly, who was also part of that breakaway, eventually won that race, with Hinault having to settle for 3rd. Nevertheless, if people remember anything about the 1984 Paris-Nice, it is the man throwing the punch, not who won. Sometimes it isn't about who wins or loses.

Hinault wanted to win like nobody else. Losing wasn't in his DNA. He was fierce and unrelenting, and he deserved his nickname, "the Badger."

Bernard Hinault was one of the greats who practically defined a generation of bicycle racers, like Coppi, Anquetil, or Merckx. Right on the heels of the "Merckx Era" came the "Hinault Era." Though his dominance wasn't quite as complete as that of Merckx, it's still a good comparison. Many people consider Hinault the best complete bicycle racer of all time - after Eddy Merckx.

Hinault began his professional cycling career in 1974, but really burst into the public consciousness at the '77 Dauphiné Libéré where he beat a number of favorites, including that year's Tour de France winner, Bernard Thevenet. What often gets remembered about that race was the sight of Hinault, in the leader's yellow jersey, attacking on a mountain descent when he overshot a curve and went off the road, disappearing from sight going down a perilously steep drop. Death would not have been improbable. Next thing, there was Hinault, scrambling back up to the road with the help of a team mechanic - then getting back on a new bike, and continuing on for the win. 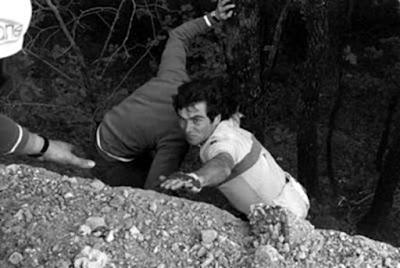 He was instantly a legend.

You can see video footage of that crash posted on YouTube:


The following year, 1978, he rode his first Grand Tour, the Vuelta a España, which he won. Also that year, wearing the colors of the French National Champion, he entered and won his first Tour de France. It was at that TdF that Hinault firmly established himself, at the young age of 23, as the leader of the peloton. That year, there was a riders' strike during the Tour to protest conditions and demands on the riders -- particularly the practice of having two stages in a single day. Some people have described the rider protest initially as being somewhat tepid and haphazard, until the young Hinault stepped forward, and with absolute confidence, strode with his bicycle to the starting line and struck a pose of power and defiance while the rest of the peloton fell into place behind him. 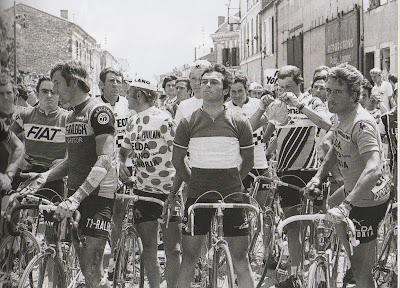 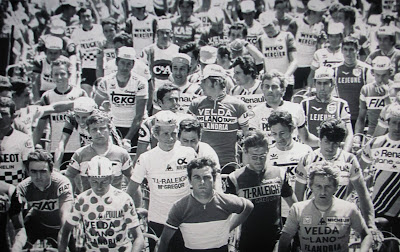 Comparisons to Napoleon were not uncommon.

Hinault went on to win the Tour again in 1979. In 1980, he won the first of his three Giro d'Italia victories. His goal that year was to achieve cycling's "Triple Crown" - the Giro, the Tour, and the World Championship in the same season. He was leading the Tour that year but had to abandon with a knee injury. He did come back to win the 1980 World Championship. Though he several times got two out of three, the Triple Crown was one thing he never did achieve.

He won the Tour two more times, in 1981 and '82 bringing his total at that point to 4 wins. He won the Giro in '82 and his second Vuelta in '83. Hinault missed the 1983 TdF, again because of knee problems. In 1984, with his new La Vie Claire team, he finished second in the Tour de France, more than 10 minutes behind his former Renault teammate Laurent Fignon. In 1985, he won his third Giro d'Italia.

At the 1985 Tour de France, which I covered in some detail in my previous post, Hinault was caught up in a terrible crash in the final kilometer of Stage 14, breaking his nose. He eventually crossed the finish line under his own power with his face completely obscured by the blood. It was an incredibly dramatic moment, and the footage of it is still shown routinely in those "looking back" segments about the Tour de France on television. 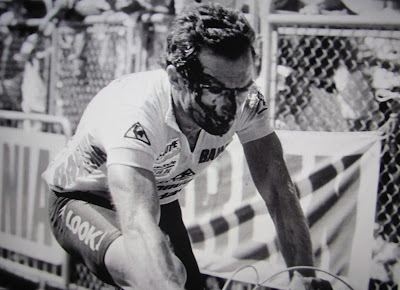 Though he probably couldn't have done it without the sacrifice of his teammate Greg LeMond, Hinault did go on to win his 5th Tour de France that year, matching the record of Anquetil and Merckx.

1986 will be remembered as a year of loyalty put to the ultimate test. After LeMond's sacrifice in 1985 that helped Hinault to win the Tour, Hinault promised to repay the debt by helping LeMond to win the following year. At the '86 Tour, it appeared to some as though Hinault had forgotten about the promise as he repeatedly went on the attack, always keeping the pressure on LeMond. That battle was the subject of the book Slaying the Badger by Richard Moore, which was turned into a film for ESPN by director John Dower. 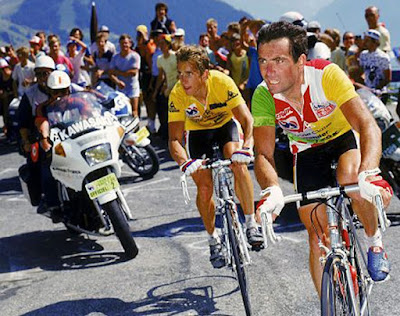 The film version of Slaying the Badger, particularly, seems to take the position that Hinault had betrayed LeMond, and interviews with LeMond would indicate that he for one still sees it that way. Hinault for his part insists that he was riding hard to weaken the rest of the competition and had no intention of denying LeMond the victory. Whichever side one takes, the fact is that the battle between them made the 1986 Tour one of the most memorable of all time. Here was something I had said in an older post about the film:

"While I get the impression from the film that I was probably supposed to see Hinault as some kind of villain in this story, personally I have a hard time with that. Hinault was a fierce competitor. On one hand, it's clear that he couldn't have won the '85 Tour without LeMond's sacrifice. Hinault suffered through the latter half of that Tour and it was probably easy at the time for him to make the promise that he would repay LeMond. But the next year, he's feeling good, he sees the opportunity to be the only man to win 6 Tours, and he starts to question the logic of helping someone else to win. Racing for someone else just wasn't in his DNA. Like Abt says, "he couldn't help himself." But also, even as difficult as it was for LeMond to win, with challenges coming from not only the whole peloton but his own team, many people (particularly in Europe) called his '86 victory a "gift" from Hinault. What would they have said if Hinault actually appeared to be helping him? I understand LeMond's sense of betrayal, but in the end, it seems to me that it elevated his victory. If there was any doubt (there was not any for me) that LeMond truly deserved to win the '86 Tour, this film should set things straight."

Hinault finished the '86 Tour in 2nd place, and it should be pointed out that he never finished a Tour below that position. Later that season, Hinault won the Coors Classic in Colorado and retired at the end of the season, still at the top of the sport.

After retiring from professional racing, Hinault went back to his native Brittany to spend time farming. He also works for Amaury Sport Organisation, or ASO, the group that organizes the Tour de France, as well as a number of other racing events. In this capacity, he can often be seen on the winners podium giving out the awards. And in some cases, he still gets to display that same fierce pugnacity he displayed in his racing career. When overenthusiastic or unruly fans look for their 15 seconds of fame by climbing onto the winners podium, Hinault is quick to dispatch them unceremoniously. 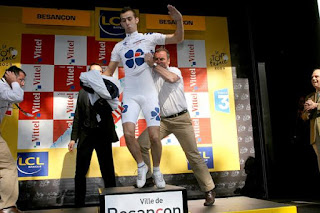 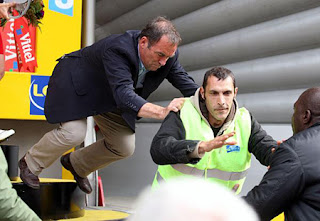 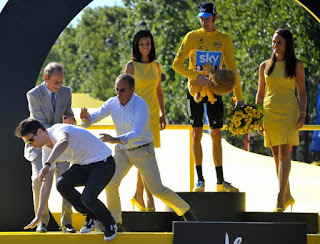 Hinault's record, with over 250 professional wins, is an amazing one -- and in numerous aspects is second only to Eddy Merckx. It would be unlikely in the current era to see anyone surpass either Hinault or Merckx given that few riders today even attempt to be as competitive in such a wide range of races and disciplines. Only a handful of racers have won all three Grand Tours, and Hinault is the only person to win them all at least twice. In addition to his Grand Tour victories (10 in all) he had wins in almost all the Spring Classics, including Paris-Roubaix which he despised and once referred to as "a race for d*%#heads." The only Classics he never won were the Tour of Flanders and Milan-San Remo. He was also World Champion, and a 5-time winner of the Grand Prix des Nations.

Then and now, Hinault stands out as one of the all-time greatest.
Posted by Brooks at 4:31 PM