When it comes to old bicycles, the subject of restoration and renovation comes up a lot. People have an old bike they've ridden for a lot of years, or maybe find one at a garage sale or an uncle's basement. The bike has some chips in the paint, a little surface rust here and there, maybe some pitted chrome. It's a decent bike though, and they'll consider getting it repainted. Is it always a good idea though?

I get regular emails from members of the Classic Rendezvous group, and this topic is a regular one. In a recent conversation thread, someone included a link to an article from someone who probably knows as much about bike restoration and renovation as anyone can: Jim Cunningham of CyclArt. Jim was once a painter for Masi back when they were producing frames in California, then worked with the great Mario Confente until his death in 1979. Now his company is one of the top specialists in the U.S. for bicycle finishing and restoration. 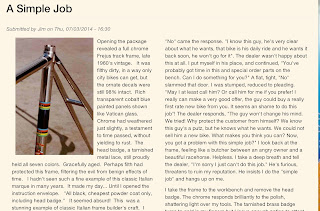 Jim has this article, A Simple Job, on the CyclArt site. It's dated from just over a year ago, though it's possible it could pre-date that. In it, he writes about getting a beautiful '60s-vintage Frejus track frame in his shop - filthy dirty, but remarkably well-preserved under the years' worth of grime. A customer sent it to him with the work order to powder coat the entire frame in plain black, including the lovely brass head badge. Nuts!

The article isn't very long, but it's worth a read. Any retrogrouch would enjoy it.

More than that, but it raises an interesting point about the pros and cons of restoring or renovating an old bike. As some collectors will say, "a bike only has its original paint once." With a bike that's rare and/or valuable, one should really think twice before getting new paint. If there is significant damage that must be repaired, it may be one thing - but things like a few chips or scratches, and some minor surface rust can often be dealt with while still preserving the original finish.

I've renovated a few old bikes myself. There are lots of times when it is perfectly appropriate. With mass-market, mass-produced bikes, I wouldn't feel too bad about getting new paint to help give the bike a new lease on life. An old Nishiki, or Centurion might be a nice bike from a riding standpoint, but probably isn't particularly valuable or collectible. If it looks beat up and new paint would make it more enjoyable to ride - why not? Even powder coat it, and try not to lose sleep over it.

But some bikes really are better left alone. And with a more collectible bike, if it does have more serious problems that need to be repaired - like bad rust that goes beyond the surface, or a cracked tube, or something - then one should have the work done by somebody who will do it in such a way as to preserve whatever character the bike may have had, and be refinished with respect to the original. If someone doesn't really know the difference, it certainly wouldn't be a bad idea to get some input before plunging into the project. And unlike the person with the Frejus in Cunningham's article, hopefully take the advice.
Posted by Brooks at 1:49 PM