With the 2015 Tour de France entering its second week, and me still not really paying much attention to it, I thought now would be a good time for some Retrogrouch TdF coverage: 1985.

When the 1985 Tour began, Bernard Hinault was the clear favorite. Laurent Fignon, the winner of the '83 and '84 editions of the Tour, was out for 1985 due to problems with his Achilles tendon which required surgery. Hinault looked to be poised for victory. He had won the Tour four times, and finished 2nd in '84. Earlier that year, he had won the Giro d'Italia and approached this edition of the TdF in top form. Not only that, but he had hired perhaps the next biggest rival to his winning ambitions away from the Renault team - Greg LeMond. LeMond had finished 3rd overall the previous year riding for Fignon. Now that he was on Hinault's La Vie Claire squad, it seemed a powerful threat may have been neutralized.

From the opening prologue time trial, Hinault put a stamp of authority on the race. Though he lost the yellow jersey in the first few stages when the sprinters tend to rule the field, Hinault managed to keep the time difference more than manageable. This was helped by a stage 3 win for La Vie Claire in the team time trial, so that by stage 8, Hinault could take the yellow jersey with a powerful win in the individual time trial -- finishing more than 2 minutes ahead of second place finisher Stephen Roche.

As the race approached the Alps, Hinault had the overall race lead, but his teammate Greg LeMond was just two and a half minutes behind in 2nd place. Another La Vie Claire teammate, Canada's Steve Bauer, was in 4th overall, a little more than three minutes behind.

Stage 11 was the first day with serious Alpine climbs. Early in the stage, Hinault went after the Columbian rider, Luis Herrera, who was after the King of the Mountains prize. While Herrera took most of the climbers' points and the stage victory, Hinault put time into all his general classification rivals. LeMond, who couldn't really chase his team leader, eventually finished the stage in a respectable 5th place, but now was about 4 minutes behind Hinault overall. The next day in the Alps didn't change the overall standings much.

The individual time trial of Stage 13 had Hinault showing his first signs of weakness. Perhaps due to his efforts in the Alps, he didn't win the stage, though he did still add to his time advantage over 2nd place LeMond, who by this time trailed the leader by more than 5 minutes. LeMond had suffered a mechanical problem during the stage, just as he had during the prologue time trial, probably earning himself some kind of record for the worst luck, mechanically, of any TdF time trialist.

Stage 14 was a major turning point in the race. With a single 1st Category climb on the road to St. Etienne, Luis Herrera once again took off early to pick up KOM points, but this time it was LeMond who gave chase. Hinault hung back in the peloton to keep an eye on 3rd place GC rider, Stephen Roche. Herrera went on to win another stage, with LeMond just 47 seconds behind. What nobody expected was the massive pileup in Hinault's group, about 2 minutes later, as they approached the finish line. Hinault went down hard, breaking his nose, and eventually crossing the line with his face covered in blood. The images of the man riding while he could barely see through the blood solidified his reputation as one of the toughest men in the sport. 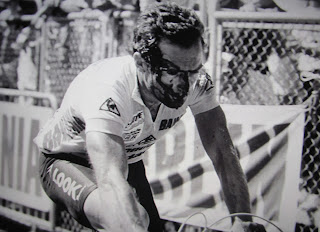 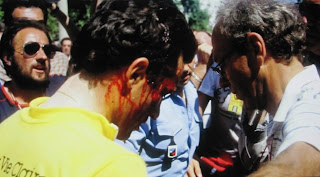 Because the crash happened inside the final kilometer, Hinault was granted the same finishing time as the rest of the riders in the group he was with, but his overall lead had fallen back to about 3 and a half minutes over LeMond. The next couple of stages saw little change in the overall standings, but Hinault was having trouble breathing through his freshly broken nose. He was also continuing to show signs of fatigue.

Stage 17 to Luz Ardiden in the Pyrenees was a brutal day of 209 km and 3 major climbs: the Col d'Aspin, the Col du Tourmalet, and Luz Ardiden. Those second two are classified as hors category climbs. As LeMond, who seemed to be strengthening as the Tour went on, powered up the Tourmalet with Stephen Roche and Pedro Delgado, Hinault fell back and back. On the final climb to Luz Ardiden, Delgado took off, and LeMond went on the chase with Roche.

It was at this point that things got pretty controversial. LeMond had gained enough time on the road to become the new race leader. On the lower slopes of Luz Ardiden, a La Vie Claire team car pulled up next to LeMond with the team's assistant director, who was on the radio with director Paul Koechli. The exchange between LeMond and the assistant director got tense, with LeMond visibly agitated. The exact substance of what was said gets disputed depending on who tells the story, but what seems to be generally accepted is that LeMond was told to wait for Hinault who was only about 40 seconds back. In reality, he was several minutes behind. LeMond waited and waited as groups of riders passed him, and there was still no Hinault.


So Pedro Delgado won the stage, probably completely unaware of the chaos going on behind him. After waiting minutes for Hinault, LeMond still finished the stage more than a minute ahead of his team leader. They were still 1st and 2nd overall, but the time difference between them was now just 2 minutes and 25 seconds.

After the stage, with the realization that he'd been lied to and denied the chance to win the stage, and very likely the whole race, LeMond was shaken and angry. Hinault then made a famous promise that because LeMond had basically sacrificed himself so that Hinault could win his 5th Tour de France, Hinault would help LeMond in '86 to win his first.

Over the next stages, LeMond took small increments of time out of Hinault's lead, eventually narrowing the gap to 1min 42sec when the race ended in Paris. In addition, LeMond had won the time trial in Stage 21, which was his first TdF stage win. Stephen Roche finished 3rd overall, 4 and a half minutes back. Sean Kelly got the green jersey and 4th place overall. 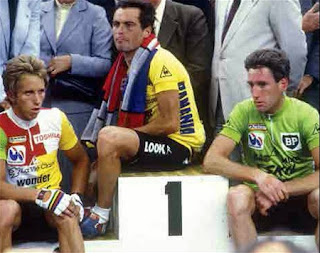 People sometimes debate what might have happened had LeMond been told the truth that day on Luz Ardiden, or if he'd been given permission to fly. It's also worth asking how things might have been different had LeMond stayed with the Renault team, given that Fignon was out of the picture that year. In any case, I for one think LeMond would certainly have won his first Tour a year earlier than it actually happened.

Hinault won his 5th Tour that year, matching the records of Jacques Anquetil and Eddy Merckx and cementing his name among the greats of the sport. His win also set up a dramatic "sibling rivalry" that would test many loyalties in the following year. And by the way, no Frenchman has won the Tour de France since.