People who've been biking for more than a couple of decades are sure to know the name Maynard Hershon, or at least know of his writing. Hershon used to write a regular column that appeared in Winning magazine back in the 1980s. If you were serious about bicycling at that time, you probably read Winning magazine, and his columns were always on the last page of each issue. Later, he was a regular contributor to BOB newsletters (that's the Bridgestone Owners Bunch to those under 30) and The Rivendell Reader. Hershon's articles often have a gentle sense of humor, and usually a strong insight on some greater truth -- at least as far as the bicycling world goes, which is admittedly a little less complicated than the rest of the world and real life as we know it -- though sometimes it still has the same relevance. As a writer, I consider him one of my influences.

I recently re-discovered this old poem that he wrote for the BOB newsletter (which was good reading even if you didn't own a Bridgestone). If there is a "Retrogrouch Creed," this would have to be it.

Good Enough for Fausto
by Maynard Hershon (aka BOB 450)

Do I like my Dettos black?
Am I tattooed (twice) "Mafac?"
Will I ride my early Sachs
Till the paneled down tube cracks?
So do I want the old days back?
By Kelly's clips - I do.

Am I put off by Kestrel's act?
Do I take the Coni book as fact?
Will I ride 40 holes in back
Till proper wooden rims come back?
Do I want the old days back?
On Gino's health I do.

Do I defend face-to-face
Merckx's "real-bike" Hour pace?
Do my shifters clamp in place?
Do I forget I never raced, just
Ground along at tourist pace
But passed by women, always chased?
But do I want Dura-Ace erased?
Trust me; yes I do.

In my world shorts would all be black,
All young guys would ride the track,
And fix my silks at a buck a crack.
See, I speak Campy but my voice is cracked,
I'm clipped and strapped but I'm off the back,
I learned the lingo but forgot the knack,
I'm retro-suffering in the laughing pack.
Getting dropped is what I do.

Enough already with the sordid facts;
I've admitted I want the old days back:
Like a red Bob Jackson in Santa's pack,
Beige-box pieces, front to back.
Cinelli, Bindas, S.L. blacks,
Each thread lubed with warm bee's wax.
We love our dreams but we live by facts;
I'd settle for a BOB-club fanny pack.


If you understand all the old-school references (and there are a lot of 'em) then you are a true retrogrouch. If you're a youngster raised on STI and carbon fiber, you can find a full explanation and glossary HERE (and then you should ask yourself what you're even doing reading this blog!). 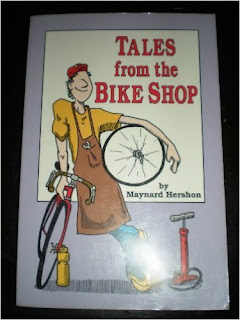 Many of Hershon's articles from Winning magazine centered on a fictional bike shop that bore such a strong resemblance to the favorite local bike shops in so many towns around the country that many people from coast to coast were convinced that he was describing their local shop.

In 1990, about 50 of those stories were collected and published in a book called Tales from the Bike Shop. I still have a copy, and I'm glad I do as the book has long been out of print and almost impossible to find (though it was apparently released in a Kindle ebook version not too long ago). The original edition of the book was illustrated by cartoonist Jef Mallett, who nowadays creates the cartoon Frazz -- which often has a lot of bike-specific content in it. Interestingly, I was able to get my own copy of Tales from the Bike Shop signed by Mallett when I met him some years back. I wouldn't mind being able to get it signed by Maynard, too.

If you enjoyed reading Maynard Hershon's articles, you should know he's still out there writing regularly. He had a blog going for a while though it seems to have been dormant since about 2011. The archives are still active, however (see HERE).

Current columns appear in The Bicycle Paper, which covers the bicycling scene in the Pacific Northwest. Many of the paper's regular articles and Maynard Hershon's columns can be found on their website, www.bicyclepaper.com/articles. If it's been a while since you've read his work, it's worth taking the time to get reacquainted.
Posted by Brooks at 9:56 AM