I just read this post from Performance Bicycle -- you know, the internet and mail order bike shop -- about 10 vs. 11-speed drivetrains. Our Take: 10-Speed vs. 11-Speed. All I can think is, who cares? Keep in mind, most of my bikes max out at 6 or 7, so I'm probably not the best person to comment -- though I do have bikes with 9 and 10 speed cassettes. Sorry Nigel Tufnel, but I have no plans to go to 11. 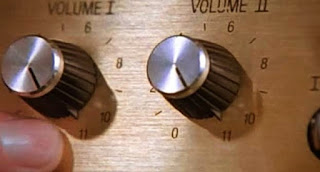 Needless to say, but the reviewer at Performance is a fan of 11. "I've been riding both 11-speed Campagnolo and 10-speed SRAM for several years now, and I switch between the two often enough to be able to tell you there are some definite differences between 10 and 11-speed drivetrains." He goes on to say, "Generally, adding an extra cog means you have more gear ratios to choose from which can make your riding more efficient."  Really?

Yes, adding one extra cog gives more gear ratios (two more, to be exact, assuming we're using a double-ring crank). But more efficient? Hmmm. . . I don't know if this person uses a gear ratio calculator or not, but chances are, there's a fair amount of gear ratio duplication -- that is, some of those chainring-to-cog combinations give actual gear ratios that are so close as to be indistinguishable from one another. One can get such ratio duplication with 5 and 6-speed drivetrains. How many duplicates are there in these 10 and 11-speed setups? In any case, the efficiency is debatable.

From that point, I'm reminded of this quote from Jobst Brandt -- and keep in mind, this was from the time that 9-speeds were the "state of the art":

The article goes on to answer other questions people have about the pros and cons of "upgrading" to 11 speeds, such as durability, shifting performance, and compatibility.

About shifting performance, the article says that shifting "isn't really affected by the addition of another cog." He continues, "If anything the 11-speed shifting feels smoother and crisper than 10-speed." I wonder how much of that is due to the cogs and spacing, and how much of it is due to different shift mechanisms (in his case, Campy vs. SRAM). Or if the difference is in the particular chain and cog designs.

However, the writer's next point is worth highlighting - especially to a retrogrouch. "My 11-speed bikes do need to be put into the stand a little more often (about once every two weeks) for some basic rear derailleur adjustments, especially after high mileage weeks." Every two weeks? Jeezus. My Rivendell has 9 speeds with indexing bar-end shifters, and I can't remember the last time I had to make an adjustment. With most of my bikes, which still use friction-only shifters, I never have to make adjustments for cable tension.

I found one point in the article that may be just flat out incorrect - though it could depend on the brand so I'm holding back a bit. On the question "Do you need new wheels" the answer is a definitive Yes. "Contrary to what you read on many bike message boards, you do need a new rear wheel." Now, I'm not certain about Shimano or SRAM, but I know absolutely that Campagnolo's hub and cassette body design is the same whether for 9, 10, or 11-speeds (see HERE). As far as the others go, I know they are still designed around the same 130 mm spacing that's used for 9 and 10-speeds, so I don't know why they'd be different.

Are 11-speed wheels less durable? Here, the answer is "Maybe" and "it depends on your riding style." Again, I'd question whether there's much difference between 9, or 10, or 11 in this regard, since they use basically the same axle width, and probably have the same amount of dish. But that amount of dish is not really good for a rear wheel anyhow.

Oh please. I switch back and forth between bikes with 9 or 10-speed cassettes, and bikes with 5 or 6-speed freewheels all the time, and the only difference I see is that I shift a lot more often on the more modern bikes.

The last question was a funny one to me. "Why upgrade? Won't they just go to 12-speeds soon?" The writer says, "11 cogs are about as many gears as they'll be able to cram into the standard 130 mm rear spacing. To fit any more gears without sacrificing wheel durability, I believe that road bikes would need to adopt the MTB standard 135 mm rear spacing, and I don't see that happening any time soon."

Why not? I wouldn't rule it out -- but I won't celebrate it either.