An Argument Against Anti-Cycling Propaganda

Browsing through some other bike blog articles, I just happened on this article from the the U.K.-based Velomanifesto Blog: 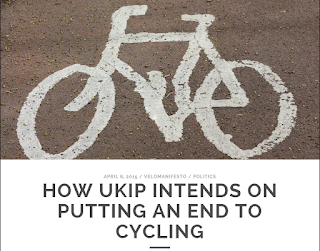 It was originally posted back in April (though it's still perfectly relevant), and deals specifically with the politics of bicycle infrastructure in Britain, but some of the issues brought up would be very familiar to cyclists no matter where they may live.

As a little background and explanation for readers outside the U.K., the article was spurred by a political flier distributed by the UK Independence Party (UKIP) that scapegoats cyclists and attacks the use of public funding for bicycle infrastructure projects. 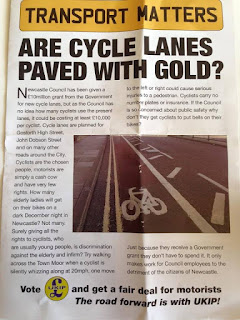 Not being totally familiar with the political landscape in the U.K., I had to do a little reading on UKIP to find that they call themselves a "libertarian" party, but are characterized by many political scientists as a right-wing Eurosceptic party that aims to pull the nation out of the European Union.

Many of the arguments made in the flier are the same kind of illogical cyclist-baiting drivel I'm sure we all hear all too often, in any country. Some examples:

"Cyclists are the chosen people, motorists are simply a cash cow and have very few rights."

"Surely giving all the rights to cyclists, who are usually young people, is discriminating against the elderly and infirm."

"Try walking across the Town Moor when a cyclist is silently whizzing along at 20 mph, one move to the left or right could cause serious injuries to a pedestrian."

"If the council is so concerned about public safety why don't they get cyclists to put bells on their bikes?"

We've all heard similar arguments -- that spending public money on anything other than automobile-specific infrastructure is a waste of money, or gives "special rights" to cyclists. That cyclists don't pay taxes, and therefore shouldn't be allowed on the roads. That cyclists somehow pose a bigger threat to pedestrians -- especially the very old and very young -- than cars. That putting more mandates on cyclists and their bikes will somehow make the public safer. The list goes on and on.

What particularly made the Velomanifesto article worth reading was the way he rebuts and refutes each one of those arguments.

Here's a sample - a response to the "Cyclists are the chosen people" argument:

"Cyclists are the chosen people? We certainly are. A commute by bicycle on any given day demonstrates this fact. The way motorists cut us up and drive too close . . . the verbal abuse we receive on a daily basis from motorists, the constant danger of dogs not on leads, glass on the side of the road, trip wires put across cycle paths with dog s%*t in bags hanging off them, the constant fear of being "doored," the fact that pedestrians step out without looking, the risk of cars overtaking through traffic islands . . . yes. . . we are indeed the deity of the road. At times it feels as if the roads were put there just for us."

As for the argument we all have heard about cyclists not paying road taxes (or gas taxes, or any taxes at all according to some), he calls it the "usual ill-informed line that motorists bring up on an anti-cyclist rant." He goes on to point out that the majority of adult cyclists DO own cars, and pay all the usual fees and taxes associated with them. But also, that roads are not funded solely through road taxes or gas taxes -- but are paid for by all the various kinds of taxes everyone pays (here in the U.S., that includes federal, state, and local income taxes, local property taxes, and even sales taxes) whether they own a car or not. He concludes on that point, "We're ALL paying for the roads and therefore have an equal right to use them."

Although the article was specifically about a U.K.-based issue, it's worth a read for anyone who's found themselves in the midst of an anti-cyclist argument.
Posted by Brooks at 7:13 AM