I recently saw this "innovative" new take on the bicycle called the "Bird of Prey" bike. It is described as a "prone" position, and of course its designer, California architect John Aldridge, has lots of claims for how much better it is than either normal bicycles, or typical recumbents. 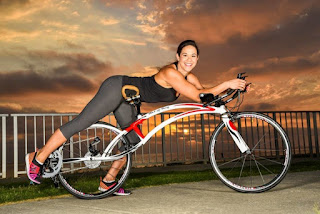 As opposed to being seated, either on a saddle, or on a recumbent's seat with a backrest, clearly the rider lies face-down, with arms stretched out forward, and legs extended to the rear. As shown in the photos, the rider's abdomen rests on a large, wide pad, while arms are supported by pads on the handlebars. The bike's "Bird of Prey" moniker obviously implies that the position should feel like flying. The makers say that it keeps the rider very aerodynamic, while keeping the center of gravity low, and making for "quick and agile" handling. Supposedly, the position also makes it easy to turn the huge 60-tooth chainring (with an 11-36 cassette on the rear wheel). They also claim that the position makes climbing hills easy, though I have my doubts.

How new is this design? Well, as we often find when looking into the latest bicycle innovations, there's something decidedly familiar here.

Here's an old article dated from 1949:
In addition, I was reminded of several pictures I'd spotted in old issues of Bicycling! magazine.
But such things go back even farther, as shown here:

OK - so it's really nothing new. But what about the advantages over traditional bikes or recumbents?

Well, the aerodynamic advantage could be pretty easily established. Then again, a lot of recumbents also can make that claim. I already mentioned my doubts about climbing hills on such a bike -- which is a common issue with regular recumbents. Without being able to use one's weight to help turn the pedals, climbing hills becomes one of those "I'll get there when I get there" propositions. Get a low gear and just keep spinning.

I also doubt the claimed "agility" with that long wheelbase. I can't picture tight turns on such a bike.

And comfort? Well, a lot of people who have serious comfort issues with regular bikes seem to get some relief on recumbents. But despite the claims by its makers, I don't imagine the Bird of Prey being very comfortable for a ride of any appreciable length, given that one has to basically hold their head up in that unnatural position just to see where they're going. I have no doubt that my neck and shoulders would be aching in no time.

The makers claim that the low center of gravity makes the bike particularly safe, because it would be very difficult (they actually use the word "impossible") to pitch over the bars in a panic stop. Maybe so. But with a rider position so low, I'd really have to wonder about visibility -- either by the rider to see ahead, or by other vehicles to see the rider. I can't help but think that the prospect of riding on roads with much car traffic would be questionable.

No, other than reaching some pretty impressive top speeds, I don't really see this thing catching on today any more than its predecessors did in the '70s, or '49, or even 1917.
Posted by Brooks at 12:24 PM