Last summer, I had a story about an interesting 1960s Galmozzi belonging to an acquaintance, Kevin Kruger. At some point in the bike's long history it had been repainted and re-decalled as something other than what it really was. In preparing the bike for a proper restoration, Kevin discovered that the bike's original paint was still largely intact underneath the repaint. After carefully scraping and stripping that overpaint, and with some careful touch-ups, he ended up with a frame that is very nice, original, and has a patina that suggests a great history -- and a fantastic story.

When that post ended, the bike was ready for some reproduction decals and waiting for a period-appropriate set of components. Well, last I checked, the bike was completed, and today seemed like a good day to post an update on that original paint Galmozzi.

According to Kevin, the restoration decals came from Greg Softley at Cyclomondo. The bike was built up with early '60s Campagnolo Record components (that's Record -- not Nuovo Record), except for the brakes which are Universal 61 centerpulls. Remember that Campy didn't yet have a brakeset on the market when this bike would have been built originally. The wheels have classic Fiamme red label tubular rims and large flange Campagnolo hubs dated "63" - and made before Campy started engraving the "Record" name on them (usually called "No Record" hubs by collectors). Stem and bars are 3ttt Gran Prix, which seem like a good choice for the time, and the saddle is a drilled-top Cinelli Unicanitor.

Hats off to Kevin for a great job on this preservation/restoration. The bike looks great and would be a proud addition to any vintage collection. A full set of photos can be seen on Kevin Kruger's Flickr page. 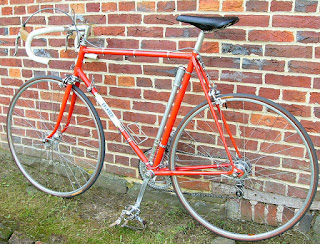 And a Totally Unrelated Update:

In August, I wrote about bike commuting and weight loss. In that article, I talked about my theory of how two shorter rides in a day might be more advantageous than one longer ride if one were trying to lose weight. That was based on my own experience that when I started commuting to and from work by bicycle, I found myself losing a fair amount of weight, practically without trying to. At the time I was writing that, at the end of my summer break, I was looking forward to getting back to my regular bike commuting, and hoping to lose a few extra pounds.

Now that we're nearing the middle of October, I can report that my bike-to-work average is holding steady at about 75% (in other words, I'm riding to work 3 out of every 4 days). In all practicality, it would be really hard to improve that average much, since there are times that I simply have to drive, regardless of weather -- sometimes I just need to get somewhere quickly after work, and biking is simply unfeasible. In fact, I'm on track so far break any of my previous personal records. Understand that it's still early (and I'm probably jinxing things), and if we have another winter as bad as the last two, it could easily wipe out any advantage I may build up. A couple of years ago, I had nearly as good of a an average in the fall, but a terrible winter killed it. But so far, this fall has been just about perfect for biking. By the way, my goal for the year (winter included) is to keep an average of 50%. I've only managed that feat once since I started bike commuting more than three years ago.

In addition, I've dropped about 7 or 8 pounds since the end of August. I'm right at 150 lbs. today, which is where I was hoping to be. Now, if I could just get better about cutting back on carbs, I might finally be able to get back to 145 lbs, which is what I weighed when I finished college so many years ago. Too bad I love bread and pasta so much.

Hope the fall weather is treating all of you as kindly as it is here in Ohio.
Posted by Brooks at 8:41 AM