I was just reading about a couple of new helmets with integrated LED lighting that are hitting the market. One is the Torch T2, which was out on Kickstarter a couple of years ago, and is now available for sale through the company's website. More recent is the Lumos, which met its Kickstarter goal in just one day this past summer (and exceeded it many times over before it was through), and I assume it should be ready for sale soon.

I have a feeling that a lot of readers would expect me to skewer products like these pretty mercilessly, but as a bicycle commuter who rides quite a bit in the pre-dawn darkness, I have to say that I'm at least curious about the things. It seems to me that having a little extra lighting to add to a rider's night-time visibility can't hurt - and if it can be done seamlessly without strapping on more bits and pieces, so much the better.

Between the two, I think I'd be more inclined to try out the Lumos, which looks more like a typical modern road helmet. The light system seems to be pretty well integrated into the design. The Torch T2 has that skater-helmet style, and appears to be a bit bulky, and only has a few small, narrow vents. Of course, it's a matter of preference and taste, but I've never been a big fan of that type of helmet design. In colder weather, the skater-style helmet might be okay, but in most weather, I find that my head generally wants a lighter, more ventilated helmet. 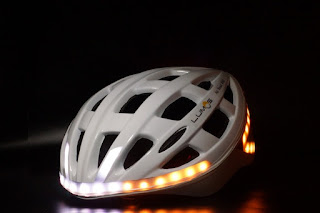 The new Lumos helmet claims to take the light-up helmet idea a little further than the Torch. One of the key features is not just that it has LED lights both front and rear, but that the lights are supposed to function as brake lights and turn signals. Truly necessary? Probably not. But assuming they actually work as claimed, they wouldn't be a deal breaker.

Reading more about the helmet on the Lumos site, the helmet's rechargeable battery is built in, and can be recharged with a typical micro-USB cable. One minor worry I'd have is water resistance. The website claims "You shouldn't dunk Lumos into a pool, but Lumos is water resistant so you can take it out with you rain or shine." How resistant is that, should one get caught in a major downpour (where visibility is almost as important as at night), I'd like to know. Also, I'm someone who often rinses out my helmet after a sweaty ride, to clean up the straps and internal pads -- and that doesn't exactly involve dunking my helmet into a pool, but it probably isn't far off. Hmmm. . .

While having some extra lighting to add to a rider's visibility is probably a good idea, I don't think people should get the idea that either of these light-up helmets is a substitute for a set of good quality bike-mounted lights (and from what I've read, neither company claims that they are such a substitute).

As far as the turn-signal and brake-light functions of the Lumos, I don't know if those are really necessary. If those features work as they're supposed to, they might be fine -- but if they don't, they'd be a serious annoyance. Also, they add to the cost, and could become just another thing to go on the fritz. On the whole, I'd probably be just as happy ditching the added complexity and simply having static non-flashing lights for visibility.

This morning on my ride to work, in that early morning darkness, I did find myself contemplating my visibility to the drivers on the road. I've looked into some of the helmet-mount lights that are available, and have even tried a couple, but I've never been really happy with the fit or the look of those lights. So, while these light-up helmets might not be for everyone, it seems that - at least for regular commuters - they might be some technology worth looking into.
Posted by Brooks at 12:55 PM