Who Really Pays For Our Roads?

Get into an argument with a driver about a cyclist's right to use the road, and at some point expect to hear something like this: "Bikers don't pay for the roads. You don't pay gas taxes. You don't pay license fees. Bikers are leeches on the roads that are built and paid for by car drivers."

If that particular "argument" doesn't sound familiar, then just try to imagine it with a bunch of cuss words and epithets thrown into the mix. Then it might ring a bell.

Well, there was a great article in The Atlantic that appeared this week that takes a look at who the real leeches on the system are, and which any cyclist should really read: The True Costs of Driving. 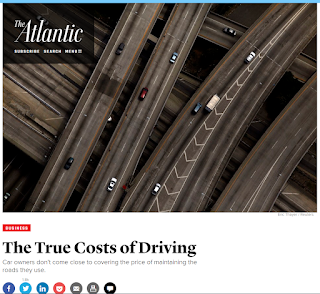 Did I say any cyclist should read it? Heck - many of us probably already knew or at least suspected as much. Maybe I should say every driver should read it.

Much of the info in that article is based on a study published earlier this year from the Frontier Group and the U.S. PIRG Education Fund. Who Pays for the Roads? It's also well worth checking out. 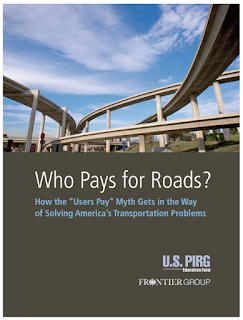 The basic gist of the Atlantic article, and the U.S. PIRG study, is that gas taxes and other fees directly associated with driving don't even come close to paying the cost of maintaining our existing road infrastructure, much less the cost of new road construction. Those taxes and fees merely give drivers (and even many public policymakers) the false notion that drivers are somehow paying their own way and therefore deserve a privileged position in transportation policy decisions.

Here are some notable excerpts:

"The amount that road users pay through gas taxes now accounts for less than half of what's spent to maintain and expand the road system. The resulting shortfall is made up from other sources of tax revenue at the state and local levels, generated by drivers and non-drivers alike. This subsidizing of car ownership costs the typical household about $1,100 per year -- over and above the costs of gas taxes, tolls, and other user fees."

Understand that that amount is paid by everyone - including those who don't even drive or own cars. The article goes on to show that the amount of that "driver subsidy" has been steadily increasing since the 1950s, and at an accelerated rate in the last 15 - 20 years.

"The huge subsidy to car use has another equally important implication: because user fees are set too low, and because, in essence, people are being paid to drive more, there is excess demand for the road system. If roads were priced to recover even the cost of maintenance, driving would be noticeably more expensive, and people would have much stronger incentives to drive less, and to use other forms of transportation, such as transit and cycling."

That point is particularly relevant in the current climate where even suggesting the possible need for increasing the gas tax is political suicide. An impossibility. The article states, "What the reaction to this hike really signals is that drivers don't value the road system highly enough to pay for the cost of keeping it in operation and maintaining it. Drivers will make use of roads, especially new ones, but only if the cost of construction is subsidized by others."

It is also important to note that because many of the costs associated with driving are hidden in ways that we often don't think about, the true cost of the driving subsidy is actually much higher than the direct dollar amount stated.

Hidden costs? Like what? Well, what about "free" parking? Consider the cost/value of real estate in any city or community, then think about how much of it is given over to the huge parking lots in front of just about any retail center. Such "free parking" isn't really free, but it has become an absolute necessity -- one of the costs of doing business -- and it is paid for by all of us in the form of higher prices for consumer goods, groceries, and more. Many cities still offer free on-street parking as well which should be counted as another "giveaway" and part of the driving subsidy.

There are other costs as well, that are more difficult to quantify in dollar amounts. Congestion. Pollution. Public safety. The shrill and very vocal anti-cycling activists out there, who stand in the way of bicycle infrastructure projects, often throw around bogus "public safety" arguments, saying that cyclists are a threat to safety -- particularly to the very young and the very old. But the fact is that, after a number of years where driving fatalities had been declining, the number of people killed in cars and by cars is now growing. According to recent statistics, the number of people killed in the U.S. in traffic crashes may hit 40,000 this year for the first time since 2007. The number of pedestrians killed by cars in 2013 was more than 4,700 -- many of whom were on sidewalks and in crosswalks. On the other hand, the number of pedestrians killed by bicycles is so small that it's difficult to even find statistics on it. In New York City, according to their Department of Transportation, from 2005 - 2013, the total number was four people (and all 4 probably made major news there). Compared to the rest of the nation, NYC was apparently a bloodbath of bicycle-inflicted carnage.

Next time you find yourself in one of those arguments about a cyclist's right to the road, or when some of your lawmakers start complaining about the cost of "unnecessary" bicycle infrastructure, or they start throwing around bogus arguments about the "proper" use of public funds in transportation projects, be sure to remind people who really pays for the roads. We all do.
Posted by Brooks at 11:54 AM