Bike Safety 101: You And Your Bicycle

This latest installment of the Bike Safety 101 series, produced by Progressive Pictures, shot on a shoestring budget in and around Oakland, California, is a dull and scolding bicycle safety film, You And Your Bicycle.

One thing that makes You And Your Bicycle unusual among bike safety films was that the producers must have been so convinced of its appeal that they actually made the film twice. That's right. You And Your Bicycle was first produced in 1948 (making it one of the earliest films of the genre that I've found), and then re-made almost shot-for-shot with only minor revisions in 1960. Although a couple of sequences simply recycled the exact same footage between 1948 and 1960, the biggest difference between the two versions seems to be the era of the cars that put the hapless riders in peril.

Though no riders ever seem to get seriously injured in the films, the narration seems to highlight -- and even overemphasize -- the potential for death or dismemberment.

Yes - very dangerous - but the narrator is only getting started.

In such a manual as the one shown, you'd find such images as these, to completely convince anybody that no sane person would even consider riding a bike:
The first lessons, as always, are on keeping the bike properly maintained.

For the segment on riding double, the 1960 version adds this horribly crude animation where a little onion-headed kid gets thrown to the pavement face-first:

There's also a section on riding at night, with admonitions against dressing in dark clothing . . . 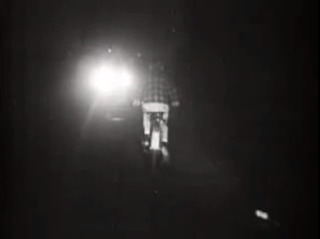 . . . as well as recommending that riders cover their bikes in a "coat of white enamel" to help them be seen.

There are copies of You And Your Bicycle available on YouTube, as well as on the Prelinger Archive. However, I've found that they often tend to be mis-identified. That is, the 1960 version is often identified as 1948, and vice versa (I'd think the cars would be a pretty clear giveaway which is which). Online copies of the 1960 version that I've seen tend to be pretty poor quality, but there's a pretty decent quality copy of the 1948 edition from YouTube that you can watch right here: