I don't know if a bike project is ever truly finished, but this one's about there.

Those who have been following the blog know that I've been working on an early '80s Specialized Expedition touring bike. I had earlier reported that it was probably a 1984 model, but now I'm inclined to think it might actually be from '83. I was hoping I could find a rosetta stone for deciphering the serial number on the frame, but learned that there is no such thing for old Specialized bikes. Sometimes a number is just a number, and I suppose it doesn't really matter either way. One clue is that I found a spec sheet from 1984 that lists braze-on downtube shift levers, whereas mine was built for clamp-on levers, which were listed in '83. Otherwise, I don't know if there's a way to tell the difference.

As mentioned in earlier posts, the bike was originally a charcoal gray, but as it came to me, it seemed it would benefit from a repaint. I sent it to Jack Trumbull at Franklin Frames in Newark, Ohio. As long as it was being resprayed, I took the liberty of selecting a different color, and chose this metallic burgundy. My replacement decals came from VeloCals, which were of the peel-and-stick vinyl variety, which is exactly what the originals were as well, so they seemed like a fine choice.

I've had detailed posts about some of the components I selected for the bike, including the saddle, wheels, headset, the brakes, rear derailleur, crank, and pedals. (those are all linked, so you can go back and check them if you missed them).

Here's the bike, in ready-to-ride condition: 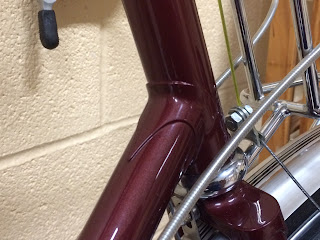 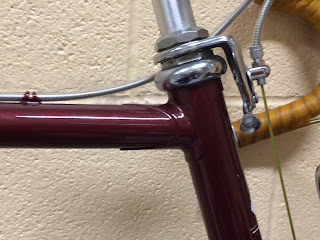 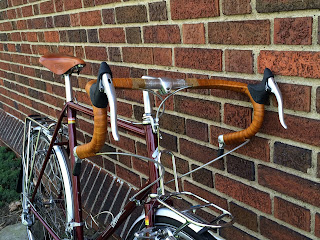 About racks - I do have a nice pair of early '80s vintage Jim Blackburn aluminum racks, for the front and the rear, that I thought about using. In the end, I chose not to use them because they have no attachment points for lights, which would have left me trying to rig something that works as well as the light mounts on these steel racks. And though the aluminum racks are definitely lighter, steel ones tend to be more durable. I'm hanging on to the Blackburns, though, in case I ever change my mind.

It's apparent that I selected a few more Specialized-brand components than what the bike would have been equipped with originally. I consider them upgrades. According to various spec-sheets I've seen for the '83 Expedition, the bars, stem, hubs, and headset would have been from Specialized. The original crank would have been a Sugino AT-triple, with MKS Sylvan touring pedals, while the seatpost would have been a ubiquitous-in-the-'80s SR Laprade. Derailleurs would have been the previously-mentioned SunTour Mountech. In 1983, the shift levers were SunTour "Symmetric" downtube levers, which were supposed to trim the front derailleur automatically when one shifted at the rear. Those also, from what I've read, had some durability issues. I see my Power-ratcheting BarCons as a period-correct upgrade. When I got it, my bike still had the original Specialized-brand (made by Nitto) bars, but not the original stem. But the bars were badly gouged by a previous owner who must have tried to fit them into an ill-fitting stem. The Nitto bar and stem I chose are good replacements.

I could always do some fiddling with the bike, making small changes and adjustments, but on the whole I think this is fulfilling my vision for a classic '80s grand touring machine. Hope you've enjoyed following the project.
Posted by Brooks at 7:24 AM