I know I've written about this before (Fakes and Forgeries), but I've been seeing more news in the last couple of months about "fake" or "counterfeit" frames on the market. The latest news I've seen involves carbon frames from Look, though no high-end brands seem to be immune to the problem. A quick look at internet sites such as Alibaba.com, or DHgate.com can find frames from Look, Cervélo, Colnago, Pinarello, and many others, with prices ranging from $400 - $1000. It's not hard to find them on eBay, either. In many cases the real things sell for at least $4000, so they are a classic case of "if it seems too good to be true. . ." Lots of fake components are being sold, too, like carbon fiber handlebars and stems, seat posts, cranks, and more. 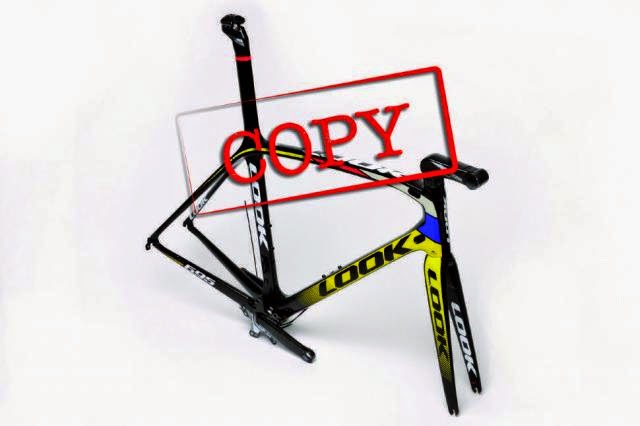 Needless to say, if someone were to buy one of these fakes and then have a problem, there'd be nowhere to turn, as the manufacturers' warranties certainly won't cover fakes, and the makers or sellers of these frames are likely to be impossible to track down. That doesn't seem to stop a lot of people from buying them, though.

Sifting through some of the bike forums, I'm absolutely amazed at some of the comments out there about counterfeit frames. It seems that people rarely buy these things unwittingly, but rather, buy them with the full knowledge that they're getting a fake. And they don't care.

There are all kinds of arguments against buying something like this. One is ethical. A company builds up a reputation for quality -- someone else cashes in on that reputation with a product that may not live up to the quality standards of the real thing, thereby profiting at the real company's expense, while simultaneously hurting the real company's reputation. When people see pictures of a broken carbon frame on the internet, they see the name on the downtube -- whether it's "real" or not gets lost or forgotten.

I saw this comment on one of the forums, from a person who was buying a fake: "I wouldn't be buying this instead of a genuine Cervélo, I'd be buying it instead of an unbranded version of the same sort of thing." And another: "Buying this frame isn't depriving Cervélo of a sale. . . it's not meant to trick anyone into parting with money." My response to that sort of thinking is that it isn't simply a question of depriving Brand X of a sale -- but rather, that one is supporting a market that basically amounts to piracy.

The other argument is a question of safety, since there is no way to know if the product under the decals is built to the same standards as the real one. And the counterfeiters, who are unlikely to be held accountable if their frames fail, have little to lose. I'll probably always have my doubts about the longevity of carbon frames anyhow, but I can be absolutely adamant that I wouldn't trust my life with a fake when there's nobody to stand behind its quality.

The usual argument from people who buy and sell the fakes is that the frames are made in the same factories that makes the real versions, they just don't have the same huge markup in price. Another comment from one of the online bike forums: "The real bike is made in China, there's no reason to believe that something like this won't be made with exactly the same level of expertise." Thing is, there's no way to know that for sure. In fact, in the recent case with the Look brand frames, the originals are not made in Asia at all, so the argument that it's the "same factory" doesn't hold up. And even if they are from the same factory, there's no way to know the frames are built to the same standards when they're being cranked out after hours by a crew that's looking for easy profits. With carbon fiber, especially, so much depends on what's going on deep below the surface, between the layers of carbon and plastic, and its impossible to know just from looking at it. There have been examples of these counterfeit frames that were made almost entirely of plastic, with virtually no carbon fiber at all, save for a thin cosmetic layer on the surface. Yikes.

The issue of fakes doesn't just affect the makers, buyers, and sellers of high-end carbon fiber frames. When buying bikes on the vintage market, the possibility of getting a fake is very real, especially if it is a collectible or valuable brand. But in most cases, there are ways to tell if the bike is an impostor if you know what you're looking for. But also, if one does unfortunately buy a fake Hetchins, or a fake Mercian, or some other vintage brand, it's more likely to be a financial issue than a safety one. Typically, a "fake" collectible vintage frame is a cheaper lugged steel frame, painted and decalled to look like a more desireable one - but under the surface, it's still a decent steel frame, and it's unlikely to break apart unexpectedly. There aren't factories in Asia cranking out lugged steel frames and passing them off as vintage Colnagos. The cost and the labor of making lugged steel frames, compared to the demand, is such that there'd be no way to make much of a profit. It's much easier to make a mold and pop out fake carbon fiber Pinarellos (or "Chinarellos" as I've seen them dubbed).

Last time I wrote about the issue of fakes, particularly in regards to counterfeit carbon fiber frames, I said that I have a hard time feeling much sympathy for the manufacturers. Not that it nullifies the ethical arguments (it doesn't), but to some extent the manufacturers have brought this problem onto themselves. I wrote, "So many companies have moved their manufacturing to Asia to cut manufacturing costs to the bone, while selling the goods in the U.S. and around the world at premium prices. Knowing how much the goods can sell for, and how cheaply they can be produced, it shouldn't come as a surprise that some of the factories go the the 'dark side'." Even in the cases of carbon frames that are not being built in Asia, the fact that they can be so easily reproduced (at least visually) -- probably by just making molds from existing frames -- says something about the difference between modern carbon vs. classic steel.

Just another reason to be a retrogrouch - even when it's "fake," steel is still real.
Posted by Brooks at 8:22 AM