A reader recently alerted me to the fact that the web-comic Yehuda Moon & The Kickstand Cyclery has been resurrected. According to the site, www.yehudamoon.com, 2 - 3 new comics will be added each week. Good news!

Since we last saw Yehuda, Joe, and the rest of the gang from the Kickstand Cyclery, in 2012, fat bikes have burst onto the scene, so one of the new series of strips of course had to look at that new trend.

Back in April, 2014, I had posted an article about the comic, with some background and history about the strip and its creators, Rick Smith and Brian Griggs. For anyone who may have missed it, that article is re-published here, slightly edited. Enjoy!

I once very nearly named this blog The Lauterbrunnental Leaflet, after a fictional retrogrouchy newsletter from the comic strip Yehuda Moon & The Kickstand Cyclery. The comic is a must-read for anyone interested in bicycles, as creator and artist Rick Smith really has his finger on the pulse of the bicycle world. 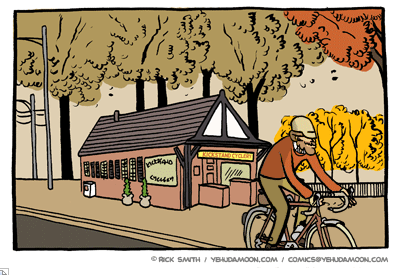 The comic revolves around a little bike shop, The Kickstand Cyclery, and its owners/partners Yehuda Moon and Joe King. Yehuda and Joe represent two very different sides of the bicycle world. Yehuda is the retrogrouch and bicycle advocate, forever tilting at windmills as he rides his bike everywhere regardless of the weather. He believes in waxed cotton bags, fenders, Dutch city bikes, rain capes, lugged steel frames, etc. Joe is the club-racer speed demon who believes in going fast, keeping light, using modern technology, and driving to work when it rains. The shop's other employee, level-headed Thistle, is the woman who tries to keep the universe balanced between those two opposing forces.

Much of the content of the comic is introduced through the day-to-day operations of the bike shop and interactions with the customers who come and go. A few regulars have included "Captain Dashboard," who has every known gadget attached to his handlebar; the "Bicycle Hypochondriac" who always worries about imaginary bike afflictions; the bearded "Recumbent Rider" (self-explanatory); the neighborhood kids; and the visiting ghost of Fred, the bike shop's former owner, killed by a hit-and-run driver -- visible only to Yehuda, Joe, and (sometimes) Thistle's child, Fizz.


From time to time, the strip would feature Yehuda perusing the pages of his favorite newsletter, The Lauterbrunnental Leaflet, which according to the strip's creator, Smith, was based on The Rivendell Reader. The real newsletter would be eagerly awaited by fans and devotees of Grant Petersen, the Rivendell Bicycles founder who would espouse such topics as the simple joys of traditional bicycles, the beauty and comfort of leather saddles, and the wonders of beeswax. Yehuda is a full fledged fan of the fictional leaflet, while Joe would routinely mock it.


YM&TKC would often delve into bicycle-world debates many cyclists can relate to -- like carbon vs. steel, bike lanes, vehicular cycling, the helmet debate, and more. The debates are rarely ever "settled," but between the various characters, one often gets to see several points of view, and it's usually a good laugh. 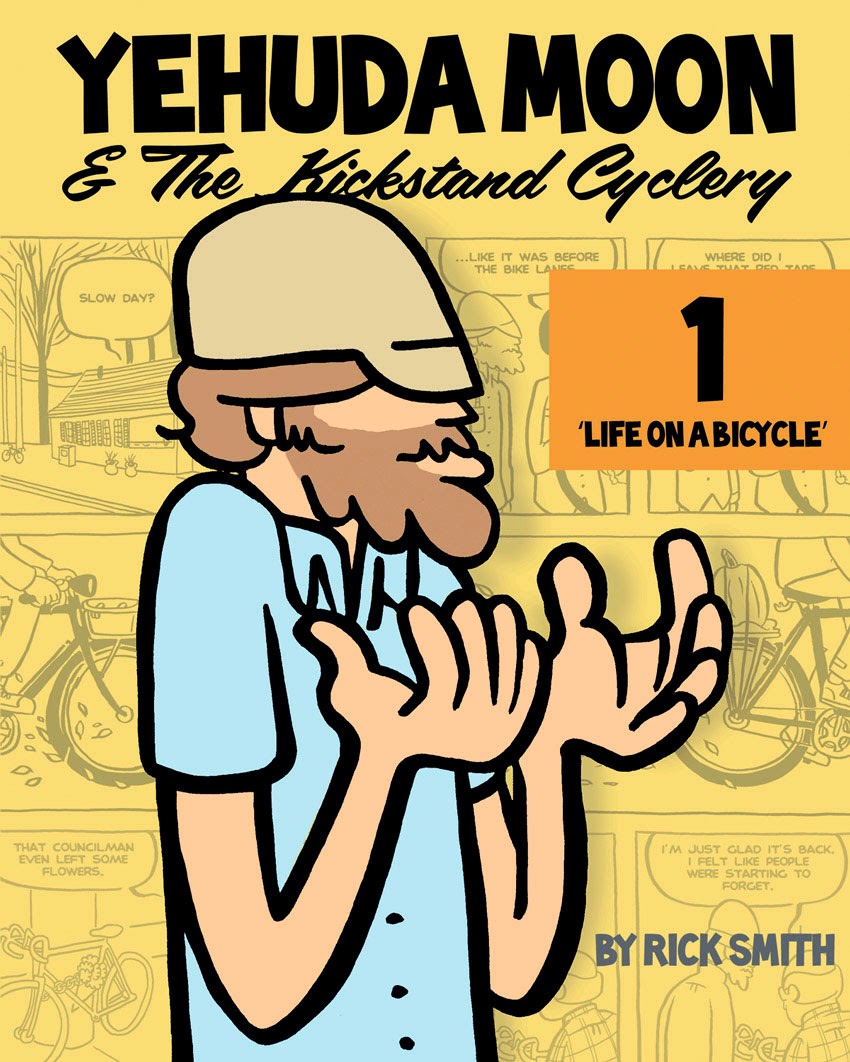 The strip originally ran from 2008 through 2012, with a hiatus that lasted several months late in 2011. Co-writer Brian Griggs entered the picture some time after the first year. The comic strip ended in December 2012, with Smith citing the difficulty in keeping the strip going amidst other obligations. One can still follow the strip's entire run online at www.yehudamoon.com and there are four bound collections available for purchase from the website, and at Bicycle Quarterly Press. There is a fifth volume, covering the 2012 strips, but it seems to be a difficult one to find.

Some interesting background about the strip is that Smith is an Ohio native, and used the area around Cleveland as the setting for his fictional bike shop world. The building that houses the Kickstand Cyclery is based on an actual Cleveland-area landmark, the Coventry Station in Shaker Heights, a little tudor-styled depot next to the rapid transit tracks. It once housed a gas station, but has never actually been a bike shop.

Yehuda Moon & The Kickstand Cyclery is a fun and sometimes thought-provoking look at our bicycle sub-culture. My guess is that anybody who rides would find something or someone to identify with in the comic strip. No question, I often see a bit of myself in Yehuda, and I'll bet a lot of Retrogrouch readers would, too. If readers aren't familiar with the strip, I highly recommend checking it out -- and for those who miss it, it's worth going back and revisiting old friends at the Kickstand.
Posted by Brooks at 6:52 AM