The Tesla of Bicycles?

A lot is being made these days of the Tesla "premium" electric cars, which bring serious performance, hot styling, and lots of media buzz to "green" vehicles -- then again, at $70,000 and up, they'd better, right?

A couple of recent upstarts (I've decided I prefer that to the term "startups") are trying to make their names by linking themselves with that Tesla name -- by producing what they would like people to call "The Tesla of Bicycles."

Yep. The Tesla of Bicycles.

Which part of the Tesla name they want people to associate with their products isn't quite clear to me though. It certainly isn't the premium performance or styling. Is it the fact that they are electric? OK, but electric bikes are all over the place these days. It certainly doesn't have anything to do with being "green" either, as strapping an electric motor and some big lithium-ion batteries to a bicycle is kind of the opposite of going green, if you ask me.

The Storm eBike is currently on IndieGogo and has far surpassed its fundraising goal. The introductory price for the Storm is currently set at $499, though that price is only good until Feb. 6 -- so act fast! The price may climb to over $1000 when it goes full retail. However, taking a close look at the bike itself, the frame and components don't look to be any better than those found on Walmart's $200 fat bike, so I'm guessing most of that extra cost is for the batteries and motor. 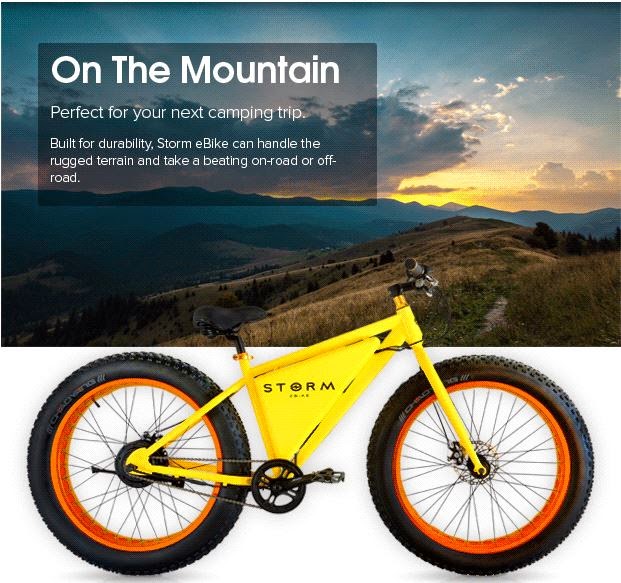 The makers of the Storm claim their bike weighs "only" 45 lbs. and can travel 30 miles on a charge. But the reviewer for Yahoo Tech points out that the 350-watt motor doesn't quite have enough power to get the thing up steep hills without some pedaling assistance from the rider, to which I'd add "good luck with that." The Storm website also claims the bike is "Perfect for your next camping trip" because it can "handle the rugged terrain and take a beating on-road or off-road." Have fun pedaling this beast home when the battery runs down, leaving you stuck in the middle of that rugged terrain. I think they could improve the efficiency and range of the Storm considerably by putting some road-worthy wheels and tires on it, instead of these monster fat tires that are all the passing rage. I mean, the website says it's perfect for the beach (well, it does come from Malibu) but those tires and wheels make it less than ideal for pretty much anything else.

Another west-coast upstart, the Bolt, is also being dubbed by the media as "the Tesla of bikes" -- though to be fair, it seems the inspiration for its builders is more moped than bicycle. Yes it can be pedaled like a bicycle, but that really isn't the point of a moped. And again, I fail to see how this gets compared to the Tesla. It has that "built in somebody's garage" look to it -- probably because it was built in somebody's garage. At about $5000, it's also a lot more expensive than the Storm electric fat bike, though its makers say that like most electric vehicles, "it pays for itself over time." Actually, that is something that can not be said of the $70,000+ Tesla, unless one has a pretty extended interpretation of the phrase "over time."
The Bolt also has smartphone connectivity, because everything has to have smartphone connectivity today. That's right -- the bolt can be started with a unique command from the user's phone, and all "vital statistics" are "recorded in real time." What a relief.

There's a lot of hype and attention in the media these days about electric and hybrid cars as "green" vehicles, but no matter what they do, these vehicles will never be as efficient and clean as the ultimate green vehicle, the bicycle. Keep in mind that "zero-emissions" claims of electric vehicles ignores the power plant that charges the batteries. And few sources will talk about the true cost and the environmental impact of lithium-ion batteries -- from the mining of the materials, to the manufacturing of the batteries, and eventually to the recycling of those batteries when they inevitably die.

No -- I say forget the Tesla. It's hardly the answer for our future. And forget this trend of strapping batteries and motors to bicycles. The way I look at it, it's just a step backward.
Posted by Brooks at 11:58 AM