In my previous post, I looked at the self-assessment quiz from BikeRadar, "20 Signs That You're an Old School Cyclist." If you read the original article, or took the quiz, you might have noticed a link to another BikeRadar list, "20 Problems Only Modern Roadies Have." It isn't set up as a quiz, but if it were, I'd have gotten a big, fat, goose-egg zero. 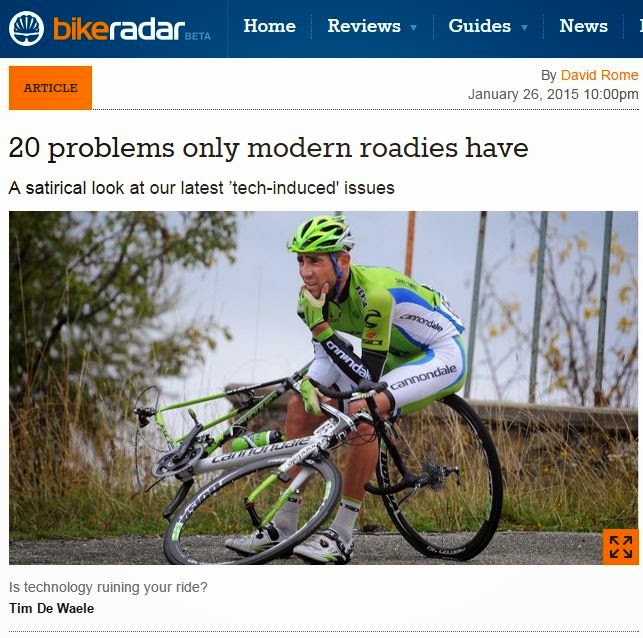 Funny thing about these "modern roadie" problems is that I've seen some of these guys roll their eyes and snigger at my downtube shift levers and 5-speed freewheels. But I can honestly say I've never had a ride end because of a dead battery, and I'm sure I never will. And I'll take pride in the fact that, short of a bike-destroying crash, or major mechanical failure like a busted axle or something, if something goes wrong on the road, I'll probably be able to fix it well enough to get home without calling for a ride.

Here's the BikeRadar list, and my thoughts on each -- has any of this ever happened to you?

20. You return from an epic ride to find your GPS didn't record and it feels like you just wasted your day and energy.   Never happens. No GPS. No computer. And unless someone is riding for all the wrong reasons, and deep down just doesn't like bicycles, how can any "epic" ride be a waste of a day and energy?

19. Your gears stopped working . . . because of a dead battery.  Never happens. Will never happen.

18. Your first ride of 2015 was on 2 January. All the achievable Strava KOMs were already taken.
I barely know what Strava is. Do you need a smart phone to use that? 'Cause I don't have one of those, either.

17. You work out indoors on windy days because your aerodynamic frame and wheels are just too scary outside.  Let me see if I understand this right . . . a bike that's "too scary" to ride outside? How much does something like that cost? Money well spent.

15. You can't train indoors because your computer has a virus.  I don't often ride indoors, but when I do, I use old-school rollers and crank the stereo (or should I say, the "hi-fi"?). What's the computer for?

14. You're involved in a crash and you get X-rays . . . of your bike. The sore ribs go ignored.  Steel frames usually wear their damage where you can see it. If it isn't bent, dented, or wobbly, it's probably fine.

13. You see someone wearing a tiger-print skinsuit and your first thought is "brave."  The less said about this the better. Can you even get tiger-print wool jerseys?

12. A car hits you because they didn't see your "murdered-out" bike and matching kit. Luckily you caught the whole thing in HD video.  I had to look it up to even find out what "murdered-out" means. I learned it means all black -- frame, components, wheels, and even clothes. Hmmm -- and it resulted in getting hit by a car? Then I guess "murdered out" is an appropriate expression. Anyhow, that is not me. And I don't have HD video capability on or off the bike.

11. Your brakes are leaking oil.  You've got to be kidding me.

9. Distracted by your GPS, you hit the back of a car.  Want to get "connected"? Get connected with the ride -- the bike, the road, and the surroundings -- instead of the devices.

8. It's wet outside, so you wonder if you should just ride your cyclocross bike on the road today?  Does this cyclocross bike have fenders? If not, then what's the difference? Or the point?

7. You get a flat and find neither you nor anyone in your group has a 60/80 mm valve tube. You call a cab/your spouse, delete the file off your GPS and pretend the ride never happened.  80 mm valves? Holy Shmoley. So what are we saying here - we don't know how to patch tubes?

6. Your heart rate/cadence/speed or power sensor malfunctions and picks up the data of a young-gun riding past. You immediately screen-shot the effort.
Never. No sensors to malfunction. Screen shot? That requires a smart phone. See #18.

5. You can't operate your bike computer because the touchscreen doesn't work with the gloves you're wearing.  I haven't used a bike computer in probably 10 years or more. It said "Avocet" and had little clicky buttons.

3. You're sitting at the lights and go to push off -- you shift for a gear but nothing happens. You quickly hear the laughter of your mate riding off and look down to find you've been unplugged.  Closest I can come to this is when some joker would surreptitiously shift your downtube lever into the highest gear, like those Team Cinzano guys do to Dave Stohler in Breaking Away.

2. Fixing a bottom bracket creak is no longer a matter of reaching for a wrench and grease. It now requires a hammer, a cup remover, a headset press, a new bottom bracket and a whole bunch of Loc-tite.  I've said before that modern bottom brackets are pretty ridiculous. If you've got a bike with a traditional threaded bottom bracket, hang on to it.

1. Your crankset tells you not to quit your day job.  I don't even know what this means. Is it a power meter thing? Do they talk now, too? And insult you if you're not putting out enough watts? Sheesh.

There you have it -- modern problems for modern roadies. And if it were a quiz, I'd have scored a big, fat "0". That's one "failure" I think I can live with.

Now, if you'll all excuse me, I need to get back to my search for a Swiss-threaded bottom bracket for an old Motobecane. . .
Posted by Brooks at 7:16 AM